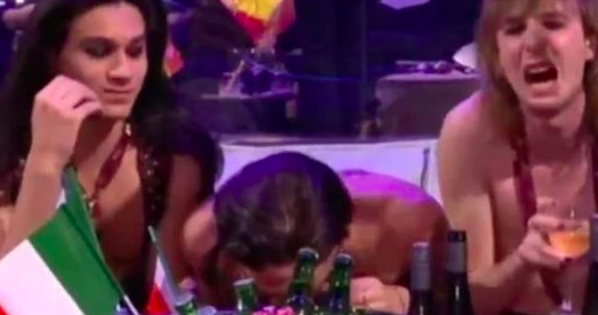 The results are in: Eurovision says the Italian singer’s drugs test has come back negative

After a weekend of memes and hurried denials, the results of the Eurovision drugs test have come back – and they’re negative.

Eurovision has announced that the test for the lead singer of Måneskin proves no drugs were taken – despite feverish speculation after he was seen lowering his head to a table at the crucial celebratory moment on Saturday night.

“No drug use took place in the Green Room and we consider the matter closed,” the statement added.

Does Italy's singer realise this is being live broadcast across an entire continent? pic.twitter.com/QLw9Nnf5tT

After the Italians won the contest, the lead singer – Damiano David – simply said at a press conference: “I don’t use drugs guys, please”. Instead, the story went that he was cleaning glass broken by a bandmate.

Clearly not convinced the explanation was sticking, Eurovision added that he would be taking a drugs test. The band requested a test, the organisers said, but it would not be “immediately organised”.

Now, the results are back – exonerating Damiano.

“Following allegations of drug use in the Green Room of the Eurovision Song Contest Grand Final on Saturday 22 May, the European Broadcasting Union (EBU), as requested by the Italian delegation, has conducted a thorough review of the facts, including checking all available footage,” the EBU said.

“A drug test was also voluntarily undertaken earlier today by the lead singer of the band Måneskin which has returned a negative result seen by the EBU.

“No drug use took place in the Green Room and we consider the matter closed.

“We are alarmed that inaccurate speculation leading to fake news has overshadowed the spirit and the outcome of the event and unfairly affected the band.

“We wish to congratulate Måneskin once again and wish them huge success. We look forward to working with our Italian member Rai on producing a spectacular Eurovision Song Contest in Italy next year.”

• Quiz: Plan a Eurovision performance and we’ll tell you how many points you’d get