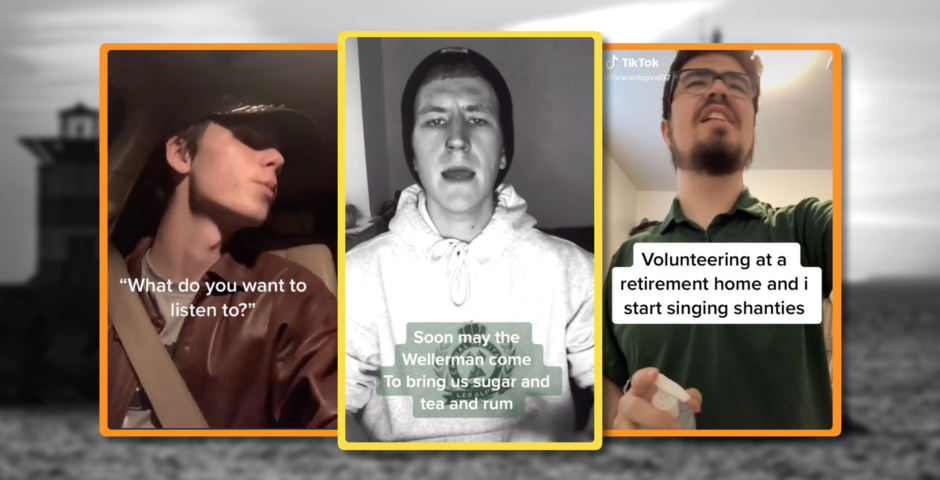 ShantyTok: Why is everyone suddenly obsessed with sea shanties on TikTok?

From skating down a road with cranberry juice to chugging nutmeg, TikTokers love to make a trend of the strangest topics going, and the latest is by far the weirdest of them all. If you’re the kind of person that starts either saying a phrase or listening to a certain genre of music ironically, before falling into a deep and unexpected obsession with that phrase or music – then this one is absolutely for you, for sea shanties are the latest craze to take over TikTok right now.

Why are people so obsessed with sea shanties on TikTok right now? What are the most popular sea shanties being sung right now? Can you recommend a sea shanty playlist on Spotify for me? Here is a full deep dive into the weird world that is sea ShantyTok.

2021 is the year of the sea shanty pic.twitter.com/ohOAGvkbtC

Why are sea shanties so big on TikTok right now?

It literally takes any one person to start a trend on TikTok if it’s catchy enough, and as such it is completely unclear how sea shanties became so big – but people are pointing at one particularly viral example, which has garnered nearly 800k likes on the app:

Nathan Evans is a 26-year-old Scotsman and, whilst you’d think he’d be able to make a pretty good day job from singing sea shanties, he’s actually a postman and he’s built a following by singing shanties for months now.

Sea shanties are over 600 years old and were invented by sailormen to simultaneously tell stories of their lives at sea whilst aiding the synchronisation of activities such as rowing and adjusting their sales. From running out of alcohol in turbulent winds to becoming shipwrecked on the rocks, they have a very distinctive story and character, something that has clearly resonated with the newfound fanbase of ShantyTok.

The Wellerman, which is the song that has brought ShantyTok to its widest audience yet, is a folksong originating from New Zealand. Although nobody quite knows who wrote it, it has been performed by many people prior to its resurrection on TikTok, but perhaps the most popular modern example is by The Longest Johns:

Before you hop onto Spotify to listen to this extensive sea shanty playlist that has over 50,000 ShantyTok-loving followers, surely you want to take a look at some of the best examples of people singing sea shanties on TikTok? Here are some of the all-time best ShantyToks. Prepare for the serotonin you’re about to receive:

• Are you as innocent as you think? Take the TikTok innocence test to find out

• Are you ready to expose yourself? Take the viral TikTok psychoanalysis test now

• How do I do the pretty scale test that’s everywhere right now?