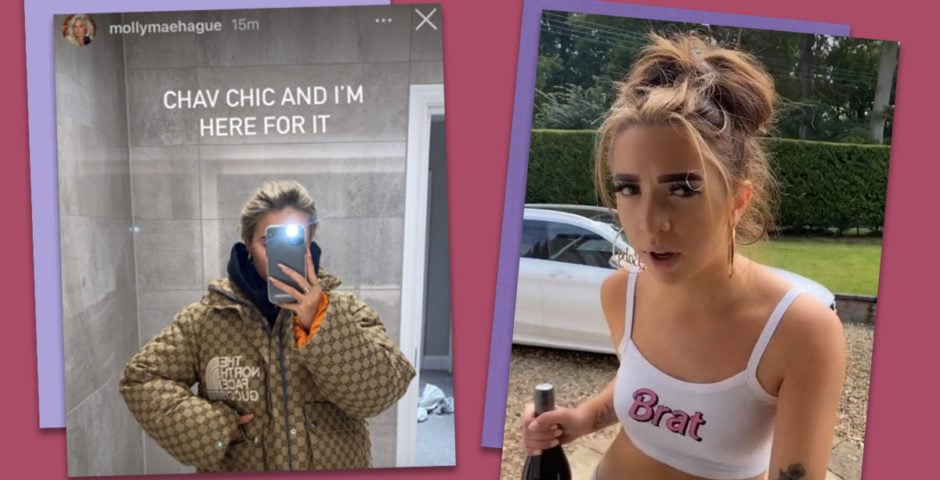 Here’s why you need to stop using the word ‘chav’

The word “chav” has unashamedly re-entered our vocabulary over the past year after the resurgence of the chav caricature on TikTok. From people plastering their face in orange foundation to the beat of Blackpool’s Millie B’s “M to the B” to chav checks, creators on TikTok have no shame in attacking the working class.

These skits have been embedded in British culture for years and this is just another resurgence, largely led by young people who don’t know better – but should. From the likes of Little Britain’s “yeah but no but” Vicky Pollard and Catherine Tate’s “Am I bovvered?” Lauren, it’s not new. But it wasn’t funny then, and it still isn’t funny now. As the same school uniform, bold eyebrowed caricatures crop up in TikTok trends and Instagram filters, the word “chav” seems to lose its weight and become a label for a look that its creators seem to think is harmless.

It’s not harmless, and with Molly-Mae’s £1,950 “chav chic” Gucci puffer coat making out like the style the media regularly demonises is now cool, enough is enough. The word “chav” will always be an attack on the working class, and your TikTok trends do nothing but showcase your classism. This is why you need to stop using it, incase the sheer embarrassment isn’t enough.

Pretty simple. If you don’t know what “chav” means, don’t use it. And if you continue to use it once you know what it means… that says something about the type of person you are.

The term “chav” is an acronym for “council houses and violence”. The word literally sets out to demonise the working class by labelling a type of individual based on identifiers which they have no control over. The characteristics that you define as chavvy were once defined by society, and held against the people that exhibited them. You can dress as chavvy for fun but in the 2000’s when that style was non-ironically worn, it was derided and seen as unprofessional and embarrassing. You’re co-opting it now because you can choose to step in and out of being “chavvy” when it suits you for humour or for clout, because you’re not working class.

And TikTok’s “chav-check” does exactly that: Here’s a 60-second video of me doing my make up intentionally bad, chewing gum, and holding a cigarette between my fingers with a kind of deviant swagger. Haha! I’m a chav! How stupid and funny am I!

At its worst, TikTok creators have produced “chav transformations” where they share the skit that they’ve finally found their “real self”. The skits always involve harmful jokes about parental neglect, alcoholism and drug abuse just to really make sure that anyone who resembles the character they’re playing feels really good about themselves and the world they live in.

There’s no way that the word “chav” can be harmless because the word is literally an attack on an entire class of people. “Chav” cannot be without the image exaggerated and taken the piss out of. That’s the air it breathes, it’s what keeps it alive. So stop feeding it.

Your overpriced sportswear will never be chavvy, and you need to realise that

Over the weekend, Love Island influencer Molly-Mae uploaded an Instagram story in a £1,950 North Face x Gucci puffer jacket with the caption: “Chav chic and I’m here for it”. Whilst Molly-Mae shook the internet with her controversial opinions about Italy’s food in the last year, her attempt to label her expensive streetwear as “chav-chic” has crossed the line into genuinely harmful. More misguided than Missguided, Molly-Mae.

Molly-Mae’s “chav chic” description completely dilutes the classism that founded the word in the first place. Items of clothing that were once the image of a “violent underclass” are now the goal for an effortlessly cool and vibey Insta grid. It’s nothing but evidence of the gentrification of sportswear that you would have made fun of working class people for wearing five years ago, except now it’s a vibe we should all work to afford. And we have to… gentrifying things tends to price out the people who used them in the first place. What was once affordable clothing, and therefore “chavvy” because it was worn by people who didn’t have much money, is now worth £2,000. If middle class people set their sights on gentrifying Primark we’ll have nothing left.

Throughout lockdown, influencers have lounged around their houses in matching loungewear sets and replaced the word “lazy” with “chav” on their ads. Comfortable, cheap sportswear has become an expensive effortless look that can cost a stupid amount of money. Stop trying to make “chav chic” happen, it’s not going to happen (if you have a conscience).

There’s no working-class equivalent to this kind of caricature

Through TikTok trends and casually labelling your style as “chavvy”, you’re doing nothing but showing off your privilege and making an entire class of people feel inadequate. But perhaps the obvious answer is that the working class take the piss out of the upper classes too, right? That would solve it, surely?

We’ve seen PoshTok, private school check and “my name’s Tarquin, I went to this school” videos seemingly take the piss out of the middle class but there is absolutely no harm in any of these trends. And more importantly: they’re made and perpetuated by middle-class people themselves. When a private school check seems tone-deaf, the creator can simply respond to backlash with a simple: “You wish you were me though!” and get on with their life. But for the working class, there’s a double loss: not only are they being taken the piss out of, but they are being repeatedly hit over the head with the opinion that their existence is the opposite of aspirational. It’s embarrassing. That’s why it’s a caricature.

Imagine an alternative to the chav check where we all grab a Prada bag, huge shades, a monochrome two-piece and greenscreen ourselves in front of Dubai or a range rover. It wouldn’t be funny, would it? It would probably be deemed as desperate or a bit sad. There will never be a trope in which the working class can poke fun at the classes above them and get away with it without being deemed as insecure. But the middle class have been punching down with these stereotypes for as long as the stereotypes have existed (because they created them, may I remind you). Until the word “chav” is eradicated from our vocabulary, the working class will continue to be assured they’re not good enough for both the physical and online worlds we live in.