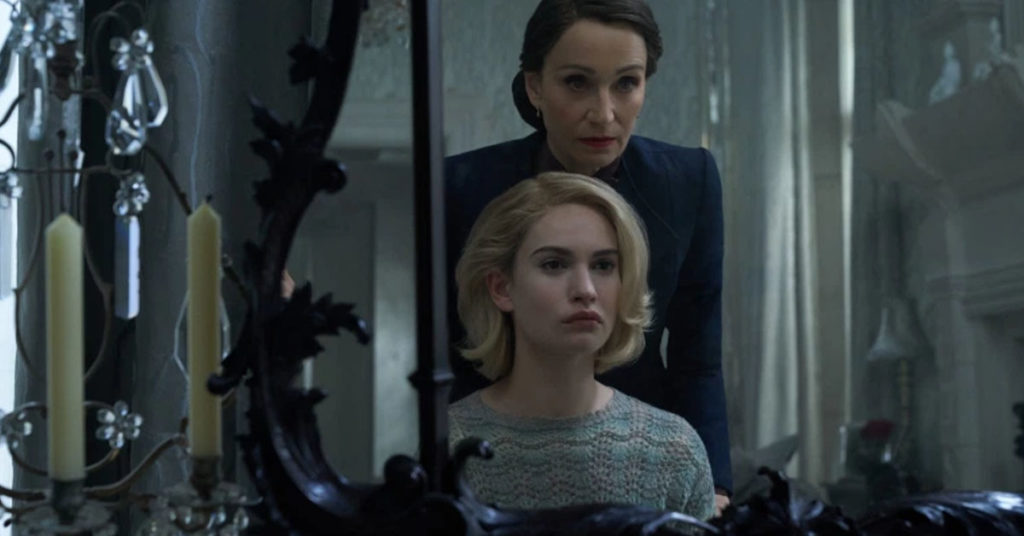 Netflix’s most recent drama film, Rebecca, was added earlier this week and the period drama with a psychological thriller feel is already in the Top Ten on the site.

It’s the story of a young girl who marries a widower, Maxim de Winter, she meets whilst working in the south of France. They quickly fall in love and after their honeymoon return to his massive country estate Manderley. There she encounters his cruel housekeeper Mrs Danvers and becomes haunted by the memory of Maxim’s dead wife, Rebecca, whose touch is still all over the house. Kinda like a spooky Downton Abbey.

Rebecca is actually an adaptation of Daphne du Maurier’s 1938 novel of the same name. It has previously been made into a number of films, most notably by Alfred Hitchcock in 1940. Hitchcock had to change a lot of the book, particularly the ending so that it would work for the strict 1940s production codes, however Netflix’s adaptation has been praised for how faithful it is to the original story.

However no adaptation is perfect and these are all the big differences of Rebecca the film vs the book:

Maxim and the narrator meet slightly differently in the book

In the Netflix movie the first time Armie Hammer and Lily James’ characters meet for the first time is in the hotel restaurant where he helps her pick up her change.

However in Daphne du Maurier’s novel the first time the characters meet is still in the hotel restaurant but Maxim saves the narrator from sitting at a table with wet tablecloth after she knocks over a vase.

We get more detailed dates in the film

You’d think their early dates in Monte Carlo would be longer in the book, however we actually see more of their time together at the beginning of the Netflix version.

In the film they go swimming, visit gardens and spend time on the beach. But in the novel Daphne du Maurier gives a quick over view of their time together.

Maxim is also far more reckless in the film, taking over a car and nearly crashing, whereas in the book he simply stands on the edge of a cliff, which is still pretty dangerous.

In one scene in Monte Carlo, Lily James’ character discovers a book of love poetry in Maxim’s car, which Rebecca had written in and he basically shouts at her to leave it alone.

However in the book when she discovers it Maxim is pretty chill and it’s the narrator who constantly looks at Rebecca’s handwriting and compares herself to Rebecca.

That sexy beach scene doesn’t happen in the book

Unsurprisingly there is no mention of Maxim and the narrator getting it on before marriage in the novel. However in the film we are treated to that lovely scene of Armie and Lily getting it on and there’s an implication that they have sex.

So Maxim doesn’t actually sleepwalk in the novel

One of the first scenes back at Manderley features Maxim sleep walking into Rebecca’s wing and Mrs Danvers popping up creepily. But this is purely made for the film as Maxim doesn’t sleepwalk in the novel.

When the narrator first discovers the boathouse and meets Ben, they only have that one conversation and then he is only seen a few times in the background of shots but they don’t have any more interactions.

However in the novel Ben is much more significant, Mrs de Winter talks to him frequently and through their conversations she pieces together what she thinks has happened to Rebecca.

However in the film all the visits are combined into one very awkward tea, where the grandma says Mrs de Winter isn’t Maxim’s wife.

When Mrs de Winter first meets the pervy Favell in the film, they get on ok and he even takes her horse riding and tells her a sob story about Rebecca.

However in the novel Mrs de Winter immediately dismisses Favell from the house, which is you know fair, considering how creepy he is.

Though she should have done, the narrator doesn’t try and dismiss Mrs Danvers in the book. Mainly because the incident that causes her to do it in the film is Mrs Danvers inviting Favell to Manderley, which doesn’t play out the same way in the novel.

The ball gown is actually white in the book

Unlike the striking red ball gown Mrs de Winter wears to the ball in the Netflix film, in the novel it is actually white. And it is Mrs Danvers herself who suggests she should wear it, rather than through her lady’s maid Clarice who suggests it in the movie.

The Rebecca revelation is slightly different in the book

The big revelation about what actually happens to Rebecca in the movie is very similar to what goes down in the novel, but with minor changes.

Firstly, Maxim tells Mrs de Winter the story of that night in the house, whereas in the movie they are at the boathouse. And in the novel he kills Rebecca out of pure anger whereas in the film he says Rebecca provoked him and egged him on to kill her.

Weirdly the film gives the impression Lily James’ character might shoot Maxim but she doesn’t, however in the novel she just tells him how much she loves him.

In the Netflix movie Mrs de Winter is very confident, with an almost over night change in her attitude and she councils Maxim at the trial. Whereas in the novel she is quiet and not as involved.

And the movie drags out the inquest over several days, has Mrs Danvers testify and Maxim and Mrs de Winter fall for Favell’s blackmail trick. None of which happen in the book.

The conclusion of the trial is that Rebecca died by suicide in the novel, however in the film it takes Mrs de Winter’s trip to London to make that possible. Whereas in the novel everyone goes up to London to try and figure out what happened to Rebecca.

Daphne du Maurier ends Rebecca with Manderley in flames and the couple returning to the house. However in the movie they return to the house, help with getting people out and Mrs de Winter follows Mrs Danvers to the beach where she commits suicide.

The ending is different in the film

One of the biggest differences of the Rebecca film vs book, is that the novel ends with Manderley in flames, whereas in the movie we see the couple in Cairo.

This ending is a hint to the novel’s beginning where the narrator describes their life moving from hotel to hotel but Daphne du Maurier never returns to that.

Rebecca is available on Netflix now. For all the latest Netflix news, drops and memes like The Holy Church of Netflix on Facebook.

•Netflix’s Rebecca is ‘unsettling’, ‘lush’ and ‘incredibly faithful’ to the novel