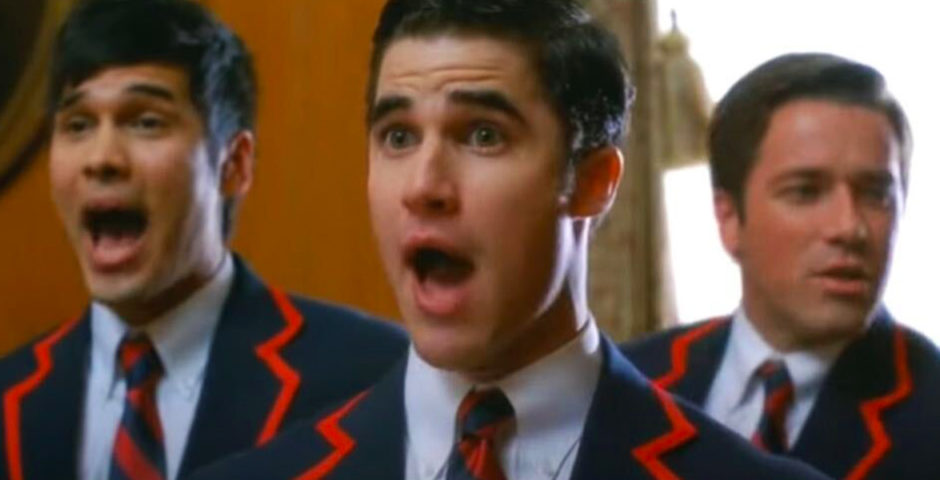 VOTE: The ultimate decision, which Glee performance slapped the hardest?

If you don’t vote Blaine we’re not friends

We all know that most of the performing in Glee is questionable. Whether it’s an autotune special from Sue or a 1D cover put together purely for iTunes sales, the singing at times distracts from the fantastic shitshow that is romance in the New Directions. But every now and again, the cast produces an absolute belter, reducing us humble Gleeks to sobbing messes on the floor.

There were nearly 900 songs across Glee’s six seasons, covering just about every artist you can think of from Sir Mix-a-lot to the Beatles. However, none made us cry, swoon or dance as much as the 10 listed here.

But which reigns supreme? It’s time to chose:

This is Glee at its best: they take an 80s classic, strip it to the bones and make it iconic for a new generation. It comes at a great time in the series too. Due to the insane emotional pacing of this show, Mr Schue offers an emotional goodbye to his Glee club IN THE FIRST EPISODE. But after seeing his rag-tag bunch of misfits belt out a tune he’s right back in the saddle.

Yes it’s cheesy, but if you don’t like cheese this ain’t the show for you chief. Nothing matches Don’t Stop for its raw, irrational hope.

Glee gave us two renditions of this Katy Perry classic, and as a “straight” 12-year-old boy, both of them left me deeply confused.

The first saw the debut of hair gel and smirk merchant Blaine Anderson. After meeting Kurt (let’s be honest they were basically married at first sight), Blaine leads the Warblers in the spirit of Perry’s original, keeping the song upbeat and energetic. In a room packed full of red-piped-blazer-clad dreamboats, we all fell in love with that voice and those eyes.

The second gives us something quite different. Blaine slumps over a New York piano, and belts out the song all alone after cheating on Kurt.

The second original song to appear in Glee, and the only one to make this list, Loser Like Me is born of defiance against coach Sue. She forced changes to the setlist and filled their lockers with dirt but the New Directions bounce back with this barnstorming number that takes them to a huge win at regionals over arch-rivals the Warblers.

It might be a bit over-the-top and you could argue we didn’t need yet another Finnchel duet, but this is still an iconic Glee moment.

Not the Boy Next Door

I am still fuming Kurt didn’t get into NYADA for this.

Lady Hummel steps away from the easy option and opts for a song that sums up his character perfectly. He leaps across the stage in shiny gold trousers and I for one am here for it. Often maligned for his lack of dance ability (once brilliantly by Santana), but Kurt moves with all his camp energy and wows the largely empty auditorium.

It’s hard to stay mad at Whoopi Goldberg, but WHO is getting in ahead of this guy?

Kurt vs. Rachel could be the contest of the century.

Tired of Miss Berry taking every solo served up by Schuester, the Hummels take a stand. They demand open auditions, and Kurt smashes the solo until the high note at the end, which he misses on purpose to protect his Dad (easily the best character in the show) from the abuse that comes with Kurt taking a traditionally female song.

Combine two belting voices, a Broadway classic and an insight into TV’s best father-son relationship and you get some upper echelon Glee magic.

Unpopular Opinion: the Troubletones would have been TWICE the group the New Directions were if they’d been allowed to grow, and this was them at their best. Mercedes and Santana were two of the strongest voices on the show, and they combine brilliantly here in one of the show’s better thought-out medleys.

Admit it. You cried.

In one of the show’s greatest guest appearances, April Rhodes (Kristin Chenoweth) stuns the New Directions with her rendition of this cabaret classic. With a voice straight from Broadway, Rhodes strips back her happy-go-lucky persona to tell a tale of loss and false hope. Like Mr Schue, she pines for a return to her high school glory days but knows they’re out of reach.

We needed more Rhodes in Glee, even if she did get half the club into drinking.

How did we have two Britney weeks before a Beatles week?

Another guest star that sparkles, Demi Lovato (playing Dani) re-imagines this 60s classic as a duet with Santana, taking them across the streets of early-morning New York in one of Glee’s finest semi-romances.

This loses marks for taking Santana into a relationship with someone other than Brittany, but it’s still a top performance.

Somebody That I Used To Know

Only one episode of Cooper Anderson was criminal.

Blaine was always the dreamiest of the New Directions but his older brother was something else. It was like Blaine was a Pokemon and Cooper was the evolved version. There’s a tension throughout the episode and it comes to the head at the end as the Anderson brothers sing out their anger in the auditorium.

Of course, they’re all friends again afterwards but in the moment it was a great angry number.

How do you settle an argument between rival gangs of high schoolers? You sing about it. Obviously. The Warblers and the New Directions take to the streets for perhaps the most violent song in all of Glee, as the two groups battle it out in an MJ-off. Acapella has never been so naughty.

In a classic piece of Glee madness, the song ends with Sebastian throwing a rock-filled slushy in Blaine’s face.

Now we’ve jogged your memory (as if it needed to be jogged we all know you remember these off by heart) it’s time to vote for your favourite below:

• I rewatched the first season of Glee and honestly what were these people on?