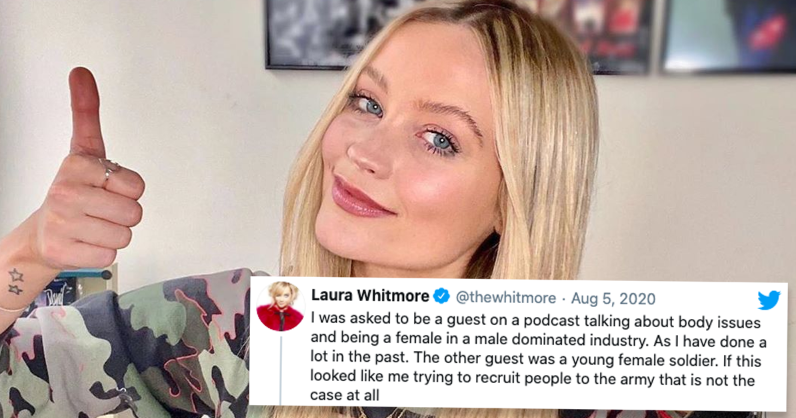 After Laura Whitmore got roasted for starring in and promoting a British Army podcast last month, the Love Island host denied she was trying to recruit people into the army.

However, documents obtained by The Times show the podcast was an effort to attract new recruits – and the British Army say influencers were told about this.

At the time, Whitmore said she was not helping the British Army to attract soldiers, saying: “If this looked like me trying to recruit people to the army that is not the case at all.” Instead, she claimed she was simply trying to highlight being female in a largely male industry.

Really pleased to share the first episode of the new podcast series ‘The Locker’ . Hear me talk about all things confidence, body positivity, being female in a male dominated industry & overcoming insecurities with the inspiring Ella, a soldier in the @britisharmy – Ella’s body changed when she trained and she didn’t fit into the stereotypical ‘feminine’ shape but she is proud of her body and knows to accept and appreciate herself and her strength. Her life is very different to mine but I learned a lot talking to her. We also chat pressures to look a certain way and fit in no matter what you do and where you come from #confidence #TheLocker #ad

Whitmore, who is Irish, was met with confusion after sharing a promo for the podcast and then immediately sharing a quote commemorating the death of John Hume, a politician who helped end the Troubles.

In the episode of “The Locker” podcast, Whitmore appeared alongside a female soldier, discussing body positivity in the army. She declared the Instagram plug as an #ad.

However, her denial that her involvement the podcast was aimed at recruiting people attracted its fair share of incredulity.

Documents obtained by The Times say: “The Locker podcasts are part of the RPP’s overall marketing strategy to attract applications by using a wide range of opportunities and media channels.”

The documents also revealed a budget of £46,825 spent on “talent” for the three episodes – of which Whitmore was a guest on just one.

A British Army spokesperson said all influencers involved in the podcast – including former footballer Jermaine Jenas – were told it was part of an army recruitment program, and that it “was an activity promoting army jobs”.

Whitmore told The Times: “I don’t agree with the history of the British Army and atrocities they have inflicted however I have friends and colleagues who are currently doctors and nurses there. And who are good people.

“I’ve never been in the army nor do I have any experience and so I would never be telling people to join something I have no understanding or experience of. It’s common sense really.”

• Can you actually name more than five people who were on Love Island this year?