Santana from Glee helped me come out, and bi girls will always be grateful for her

It was announced yesterday that actor Naya Rivera had passed away. Many have paid tribute to Naya, and even more have pointed out how influential she was in allowing them to come to terms with their sexuality.

I was 10 years old when Glee aired for the first time. In 2011, it was announced that the show would no longer be shown on Channel 4 and I begged my family to buy a Sky box that we definitely couldn’t afford so that I could continue to watch it. My parents probably assumed I had developed an addiction for the rollercoaster relationship of Rachel Berry and Finn Hudson, or was childishly obsessed with the rebellious storyline of Quinn Fabray – but they would have been wrong.

Santana in Glee was the gay older sister I didn’t have. Santana, played by Naya Rivera, taught me that it was more than okay to be bi, that I wasn’t the only person in the world feeling these confusing overwhelming feelings that I was afraid to talk about. She taught an entire generation to embrace themselves unapologetically, and bi girls will forever be grateful for her.

Santana validated feelings that were intensely confusing for me

Obviously, no Glee story line comes with any ease. Santana belts a cover of Brandy & Monica’s “The Boy is Mine” against her love-interest rival Mercedes early in series one, despite enduring a secret relationship with Brittany S. Pierce and then brutally rinsing Kurt for being gay on several occasions. It’s a complicated story line from the get-go, but so is coming to terms with not being straight.

Being a young teen and knowing that you’re almost equally as interested in girls as you are boys isn’t easy. A girly sleepover with your girl friends is difficult because you’re at an age where “experimenting” is part of a game, and you’re not meant to like it. Secretly liking it leads to a lot of insecurity and suppression, self-hatred even.

But then there’s this show, where an older give-no-fucks girl is four years ahead of you, working it all out, comfortably. Santana validates every stage of coming to terms with your sexuality, she helped me understand that what I was feeling was difficult, but totally totally normal. I knew that I would feel confused about liking girls in the same way I like boys, I knew I would feel very afraid about coming out, because Santana endured all of those things. How do you even begin to thank someone for showing you that?

In the episode, “I kissed a girl” Santana is forced to come out by Finn Hudson. Despite this episode being generally flawed, problematic and almost entirely focused on Finn, Santana comes out both gently and unapologetically.

She loves her cheerleading team with her entire being, and in a scene cut from the series available on Netflix she tells them: “It’s who I am. And if you don’t like it, that’s fine, tell me. But it doesn’t change the fact I am a natural born leader and I am not afraid to cut a bitch.”

As a young, closeted bi girl, I wanted more than anything to hold the confidence Santana has. I wanted to be able to stand in front of my friends and tell them how I felt, and be prepared to lose them if they couldn’t accept me for who I am.

I didn’t have anyone to tell me that after coming out, everything would be fine, if not better. But Santana was a force of strength among the other Glee characters and her confidence during her coming out story showed me that I could open up. Santana set an example for me, an example that I would reflect on during the time I myself came out to the people I loved, an example of how to not give a shit if someone can’t accept you for you.

There were a couple of LGBTQ+ women in cult shows before Santana – Willow and Tara on Buffy the Vampire Slayer, for example. But Santana was totally different. Glee wasn’t a cult show, it was everywhere, “Don’t Stop Believin’” was number one in the UK for three weeks. 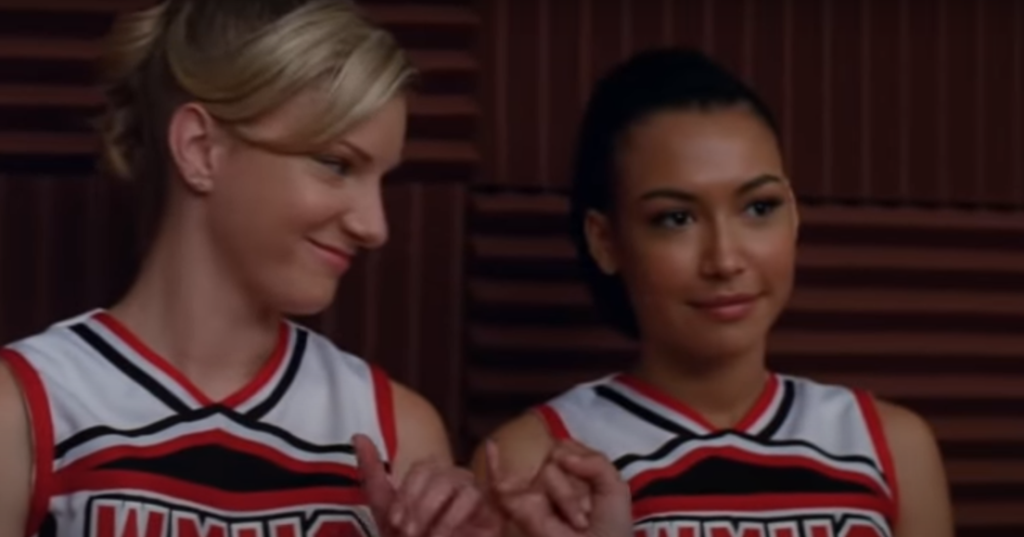 The Glee club was full of generic American high-school stereotypes before Santana. We had the popular cheerleaders, the sensitive jocks and the diva-in-training. Santana was meant to be the mean girl, but Rivera and on-screen girlfriend Heather Morris pushed for more representation, literally altering the development of their own characters. They pushed for representation, they literally allowed people to say: “That’s me” or “I feel exactly like that”.

Santana and Brittany’s relationship created a space for gay and bi girls to hope for safety in their sexuality, and Santana gave power to every single person who related to her. Santana hammered home that those who mind don’t matter and those who matter don’t mind. This lesson in itself told be it was a safe to come out, and that you will be loved regardless. Bi girls and lesbians who watched Santana and loved her will always be grateful for what she taught us, and we owe it all to Naya for her portrayal. From us: sincerely, thank you.

• These 17 books, docs and podcasts will help you educate yourself on LGBTQ+ issues