What’s the story behind the shredded cheese and fajitas meme on Twitter rn?

It’s the most Karen story you’ll ever hear

The shredded cheese and fajitas meme has taken over Twitter so quickly and so suddenly its precise origins have been washed away under a torrent of tweets. It’s all a big inside joke and you’re not in on it… until now. Thankfully this 300 words of text will clear up the mystery of the joke so you too can make funny memes about dairy products. Feel free to send me an email to say thank you. I’m being serious. Anyway, here’s everything you need to know about this weird joke about fajitas doing the rounds right now:

What is the story of the shredded cheese and fajitas meme and where did it come from?

The original tweet is this one below, in which an angry husband says of his wife: “My wife, date night after three-plus months locked up in quarantine. Waiting for shredded cheese as it’s the only way she can eat fajitas. We’ve asked four people, going on 18 minutes now. Just unreal at Allen, TX location. We gotta quit blaming COVID-19 for crappy service.” 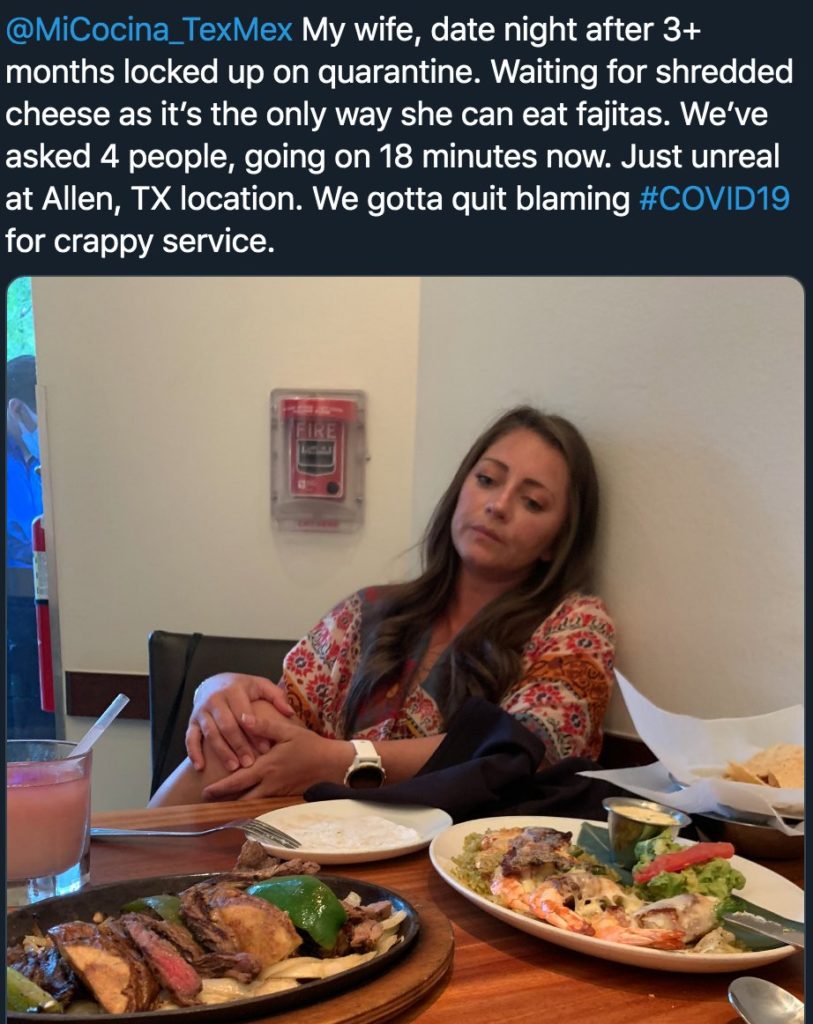 Now obviously @’ing a restaurant on Twitter to basically yell at the staff isn’t a very nice thing to do by any means, and thankfully Twitter responded in kind by rinsing the piss out of the face she’s pulling in the tweet and the quite frankly wild assertion that she literally cannot eat these fajitas without cheese on them. Now that you’ve seen the genesis of this lovely fresh meme, you’ll be wanting some examples of how it’s propagated throughout the internet. Lo and behold that’s what you’ll find below:

All the best examples of the shredded cheese and fajitas meme

the year is 3403 AD, fajitas are legal and shredded cheese is illegal, only one wife is willing to break the law to make fajitas edible again: Cheesewife

Congrats for simultaneously making your wife a meme, getting Mi Cocina cancelled for what the owners support (Chump and GOP), and giving Twitter the fodder to make Mi Cocina trend because their food sucks and your ridiculous wife *can’t eat fajitas* sans cheese.
I mean….WTF? pic.twitter.com/aMdSB1xT4y

please sir, she needs shredded cheese for her fajitas pic.twitter.com/yXZLjKjPCS

My Wife Waiting For Shredded Cheese As It’s The Only Way She Can Eat Fajitas pic.twitter.com/Ygywu9gnJj

THIS GUY WHO RUNS A PODCAST I GUESS POSTED FROM A MEXICAN RESTARAUNT THAT HIS WIFE WAS WAITING 18 MINUTES FOR CHEESE FOR HER FAJITAS WHICH SHE SAYS IS THE ONLY WAY SHE CAN EAT THEM WHICH IS FUNNY BECAUSE OF COURSE YOU CAN EAT THEM WITHOUT CHEESE AND NOW EVERYONE'S MAKING FUN OF H pic.twitter.com/ddoulDbQhS

• QUIZ: Which character from Avatar: The Last Airbender are you?

• Who is actually singing all the songs in the Netflix Eurovision film? An investigation