It was started by a 15-year-old

The “Justice for George Floyd” petition was created less than a week ago, but it has already become the most signed Change.org petition of all time.

The petition was created by a 15-year-old, Kellen S, who wanted to advocate for justice. It was started to demand local authorities in Minneapolis to arrest the officers who were involved in the death of George Floyd. Floyd was killed when white officers knelt on his neck, despite him telling them he couldn’t breath.

The petition, which was stated on Wednesday, has over 10 million signatures right now – making it the most signed in history. Change.org confirmed in a press release the page was the biggest it’s ever had. The petition is still gaining new signatures every second.

Kellen said in a statement on the site: “This has gone farther than I ever imagined. I hope that this helps bring the justice for George Floyd and his family that they deserve.”

The page reads: “George Floyd was murdered by a Minneapolis police officer. George was handcuffed and restrained and being completely cooperative when this all went down. The officer put his knee on George’s neck choking him for minutes on minutes while George screamed that he could not breathe. Bystanders beg for the police officer to take his knee off George’s neck, but the officer didn’t listen and continued to choke him.

“Not that it would matter at all, but George was not even wanted for a violent crime. A grocery store that he was signing a bad check. We are trying to reach the attention of Mayor Jacob Frey and DA Mike Freeman to beg to have the officers involved in this disgusting situation fired and for charges to be filed immediately.” 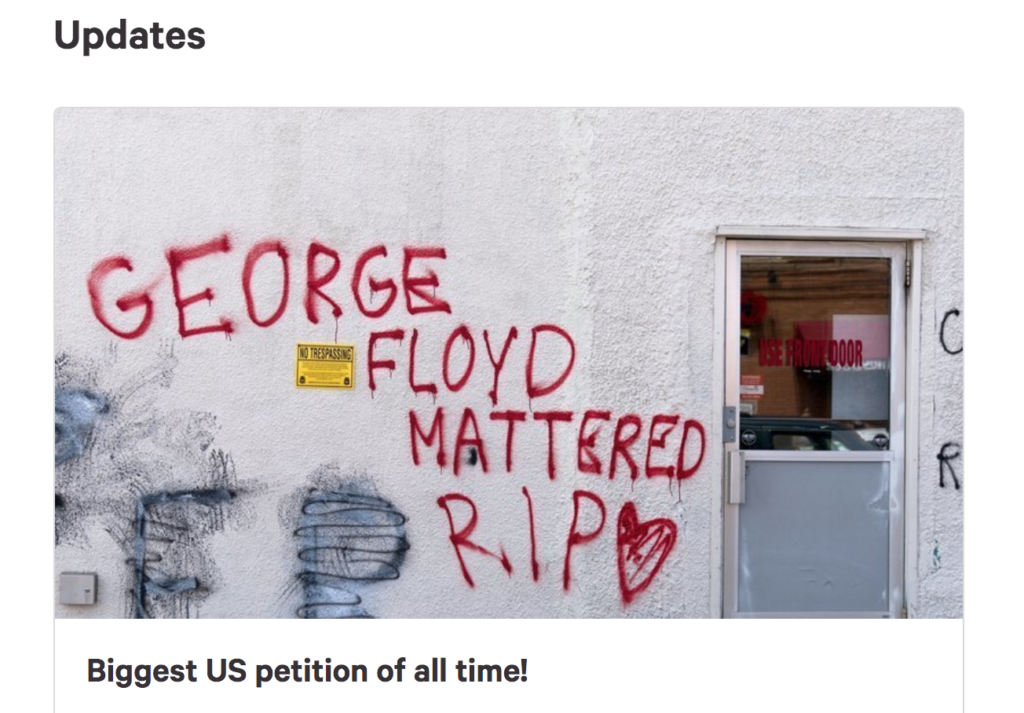 The petition is not just the biggest US one ever, but globally

The four officers involved in the death were quickly fired and Derek Chauvin, who knelt on Floyd’s neck, has been charged with third degree murder.

Signing the petition is easy. Simply go to the Change.org page here and enter you first and last name, an email address and postcode.

• ‘Whose hand is that colour?’: PLT gets backlash for black hand illustration