‘Whose hand is that colour?’: PLT gets backlash for black hand illustration

Seriously, who approved this?

PrettyLittleThing is currently getting dragged on Twitter for their illustration showing support for Black Lives Matter.

Earlier today they tweeted saying they are aware of their responsibility to discuss things other than fashion. They said: “We understand we have a duty of care to talk about topics other than just fashion and lifestyle news.”

Alongside the tweet was an illustration of a white hand holding a “black” hand. However the drawing of the black hand was literally black rather than a shade which accurately depicts a black person’s skin tone aka not jet black.

We understand we have a duty of care to talk about topics other than just fashion and lifestyle news. pic.twitter.com/6lybiBdogc

The tweet has received a load of comments from followers who asked for the picture to be taken down and to fire the people responsible for the design.

A number of Twitter users also pointed out that black people’s fingernails are not black and many called the design a “mess” and PLT were also criticised  for not linking any petitions or explicitly donating to fundraisers. 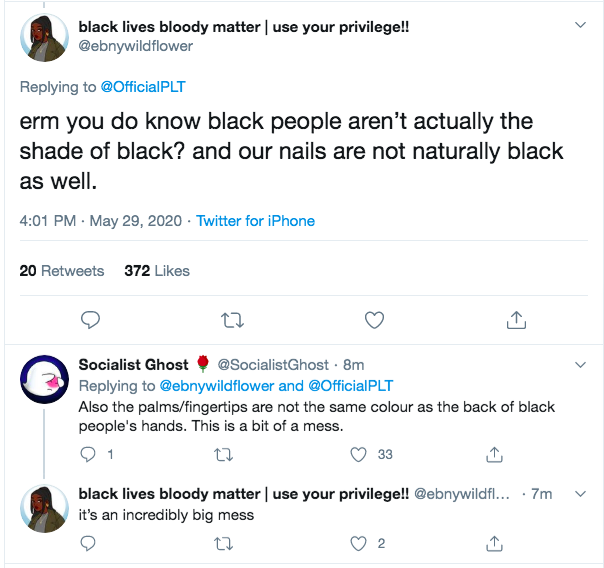 PrettyLittleThing followed up this tweet by expressing their love and support for those who had lost their lives following the tragic death of George Floyd.

They said: “We send our thoughts and condolences to the families of those tragically and innocently killed and we will do all we can to support the fight against racism. We ask everyone to stand together in this time of need. Let’s fight together, not against each other. Love The PLT Team x”.

PrettyLittleThing’s tweet is in response to the death of George Floyd who lost his life on Monday after being knelt on the neck by a white police officer in the US. His death has caused outrage and protests at police brutality and racism within the USA. A number of petitions have been set up to seek justice for his death as well as fundraisers in support for his family and to cover his funeral costs.

•PLT is selling a mask with ‘single’ on, so you can find love in the bread aisle