Loooool this film is a mess

It's here. It's finally here. The annual cheesy Netflix Christmas film has finally dropped. The Knight Before Christmas is described as a film in which "medieval magic sends a 14th-century knight to modern-day Ohio where he falls for a high school science teacher who's disillusioned by love." And it does not disappoint – it's as tragic as we all thought it would be.

Naturally, I gulped the whole film down in one go and wrote some of my thoughts when watching it:

1. Firstly, those red windows look a little too mechanically manufactured and modern for the 14th century. There's no way you'd use a single sheet of glass for windows that size. And you'd need glass, otherwise everyone in the building would freeze to death. But what do I know? I'm no expert on medieval architecture having dedicated an entire dissertation on it.

2. Ah, Vanessa Hudgens in a high school. Not. Predictable. At. All.

3. Also this "ugly" witch or "old spore" has freshly curled and perfect hair. Can we try to make this film a little more believable?

4. Hahaha wishing for a new boyfriend before Christmas, same.

5. Okay imagine you're a medieval knight who's just time travelled seven centuries, you probably would have never heard an American accent, how is he unfazed by the accent change?

6. Also, how does he know that Ohio is not in England, when America didn't even exist until the 17th century??? Were real historians consulted for the script or???

7. Is anyone else starting to feel slightly sick every time Sir Cole says "my lady?" 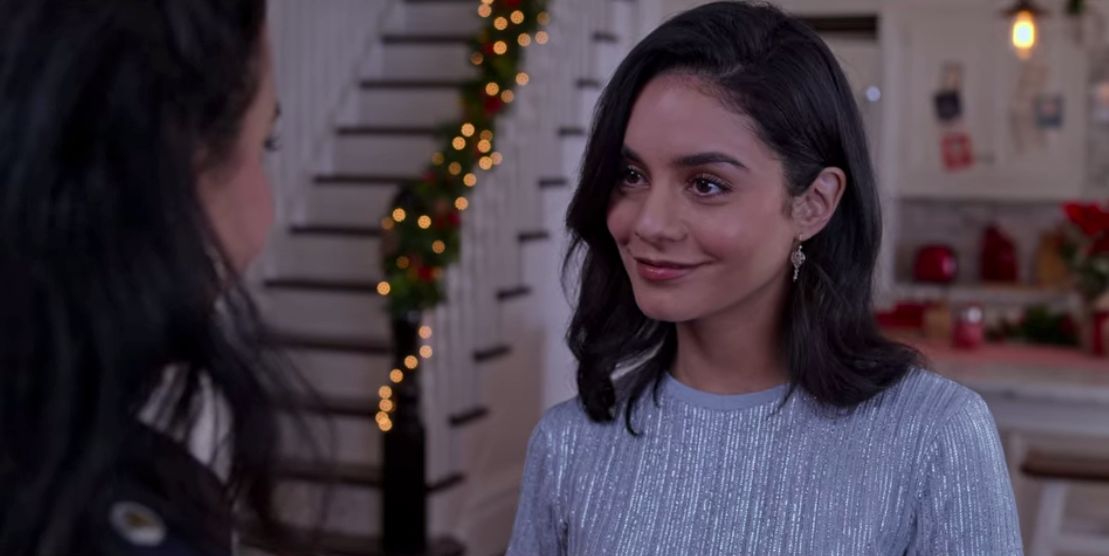 9. Sir Cole looks wired all the time. Look at how wide his eyes are open. I'll have whatever he's having.

10. Why is Brooke just letting a random man in her house like that? Does she not read the news?

11. Oh ok. Cole has just lit a fire outside and is doing some kind of pagan ritual. Brilliant.

12. So they're in the burger join now, but I need to know who cooked that burger because it looks burned to a crisp.

13. Honestly, this guy is lucky he's white because if he was openly carrying a weapon like that with a brown face, hooo boy. The film would be over right this moment.

14. But why does Sir Cole look so pained the entire time? Like what is this look on his face? Is he ok? Does his stomach hurt?

15. Wow there's a Netflix cameo on the TV. 'Holiday In The Wild' is another terrible romance you should absolutely binge on.

17. Oh my god Brooke!!! Don't give him your car keys. He's going to crash your car. Also he doesn't even have a license!!! He's going to run someone over. This is so irresponsible.

18. That door that was left open is giving me mad anxiety lol.

19. Ok, all these grey wigs are getting out of hand now.

20. Wait, he just chopped up the reindeer just like that? If that was my garden decoration, I'd be fuming. It's outrageous!!!

21. Errr so being "the biggest flirt" somehow doesn't make you a lady?? What is this sexist bullshit. This is the one thing that actually belongs in the 14th century.

22. Is anyone else starting to feel like Sir Cole is acting more like a child?? Like Brooke is fully just looking after him and is being a guardian to him. This isn't cute. Ew.

24. Ah of COURSE they're kneading dough together. How else do you get two of the main characters to fall in love.

25. Ok who is this redhead that keeps popping up everywhere??? Because I want to fight her.

27. Arghhh this kiss has honestly got me so tense and not in a good way. It was so awkward.

28. Sir Cole is leaving now. He's going back to Norwich. Gabriella- Sorry, Brooke is now crying and someone should play "I gotta go my own way" as the background music at this point.

29. Hahahah she found the magic bean, this film is so trash I love it. She's going to wish for him to come back isn't she?

31. So this whole time Brooke was his "quest?" Of course, how could we think that a film wasn't falsely equating the pursuit of romance to happiness for once.

32. Brilliant, the old witch is back and now his brother is going to do the great quest too? Bring on part two.