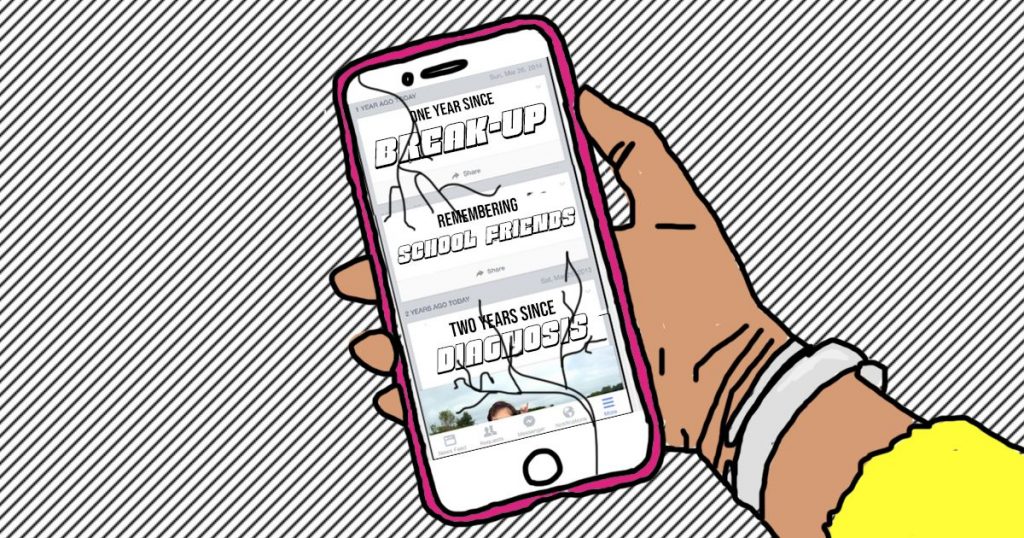 ‘Here’s a post from one year ago today’ – but what if we’d rather forget?

I'm an avid sharer of those Facebook 'friendaversary' videos. I love looking at pictures of me and my friends from years ago and thinking how beautifully our friendship has blossomed in that time.

But sometimes a memory will come up and it's something I'd really rather not have seen. A photo of a recent ex; of someone I'm not friends with anymore; or just a picture which takes me back to how bad I felt at the time it was taken.

October is never a good month for me – littered with anniversaries and often marking the onset of my usual seasonal affective disorder, I'd really rather ignore my Facebook memories from this month. They're seldom happy memories.

That said, I'm currently doing good. I’ve started a masters and moved to a new city and things are hard, naturally, but I’m not depressed. It’s not hard like things were this time last year. And yet, with autumn returning in earnest – I can’t help but think about "this time last year" and feel a little sad and strange and sick and oddly nostalgic about it.

It’s disconcerting, considering I’m quite happy and stable right now. Why am I here, one year later, having come out the other side, suddenly feeling ill at the thought of getting through these impending anniversaries? Does this mean I’m not over things I thought I was over?

In short, obviously not. Anniversaries are hard for everyone.

Well, as with a happy anniversary, it comes down to personal preference.

I spoke to some people and it turns out everyone has quite different ways of remembering. One of my friends, Jess, said she'd treat the day like any other. "I'd probably feel sad but try to hide it," she said. "I might tell my close friends so they'd understand why I was a bit off, but otherwise I'd just carry on with the day. I'd definitely still be thinking about it though."

She also pointed out the difficulty of trying to forget in this epoch of Facebook, Instagram, and Snapchat memories. "Sometimes I won't even be thinking of an anniversary but then I'll get a Facebook notification and see a picture of a memory from a year ago and that can upset me. It doesn't even necessarily have to be photos of my ex, but even photos with old friends I don't see anymore can be quite upsetting."

Charlotte also noted how Facebook comes into remembering. She said she often shares photos on social media to mark anniversaries, something increasingly common. "I think it's a nice thing to do and a small way to acknowledge the date," she said. "Especially if a Facebook memory comes up with a photo that I want to share."

Rose favours keeping busy. "Often if I can I try and get away to a different city that day – especially if it's a weekend and the place I'm in has a lot of reminders." She also chooses to consciously change the way she thinks about anniversaries: "I try to have a 'both and' approach too – as in, yes that thing happened on this day but I can still have good things today and laugh and be happy."

Valentines' Day for many is never an easy one – Sophie included. "This year – my first single Valentines in a while – I spent it with my besties doing a pub quiz and dancing in one of our rooms after and it was so lovely." Maisie also gets her friends on board: "I like to make sure I'm around friends to turn it into a memorable day for another reason."

Some will indulge in something more ritualistic. Will*told me about how he marks the death of his granddad. "We always go the the cemetery with the whole family and lay flowers." he said. "It's sort of nice how we do it every year." Rituals can certainly be comforting, in the same way that routine can be comforting – even if this routine is only followed for one day of the year.

Amelia said she turns reflective on anniversary dates. "I don't really do anything… but I might sit and think about how weird it is that so much has changed in the past years. When I look back it's like looking at a different person. Obviously the things I remember don't really affect me anymore but it is strange to reflect on everything that's happened since then."

Of course, while an unhappy anniversary for some might be a small-scale upsetting event, for some the event might be something with more long-term effects. Anna suffered a traumatic event on her 16th birthday. "I realised I could either let all my birthdays be ruined forever, or decide not to think about or look at 'dates' as being so important. If I find myself thinking about an unhappy anniversary on the anniversary I try to celebrate how far I've come since that day."

I'm also inclined to celebrate my self-growth. The anniversaries I'm dreading are still for things in the recent past so I wouldn't deign to claim that they don't affect me anymore, but it is true to say they affect me in a different way. I probably won't cry and spend the day in bed, but I'll definitely be feeling a little blue. But that's not necessarily a bad thing.

I’ve changed so much in the past year and will certainly change a lot more in the coming year. By being forced to reflect on the last 365 days through the unpleasant reality of impending anniversaries, I am pleasantly reminded of my own growth, and the fact that I still have so much changing to do. So while I’m sad for my younger, former self, I’m pretty chuffed for myself at the present moment, and my new-and-improved future self. I survived (and will survive, Gloria Gaynor style), after all.

Anniversaries don’t have to be about looking back and remembering sadness. They can be a reflection on how far you've come. Allow yourself a cry, a takeaway, and a day in bed if it’s what you feel like. But also allow yourself to be proud of surviving another trip around the sun. The anniversaries don’t get easier – you get stronger.