Revealed: The unis making students wait over a month for counselling

At one uni the average wait was 52 days

Some universities are making students wait over a month for counselling, new data has revealed.

The data, obtained by Lib Dem MP Norman Lamb, shines a light on the extent of the shortfall in uni mental health services, even as budgets increase to record levels.

Only 16 unis provided figures on average waiting times for the most recent academic year, prompting the MP to say a gap in knowledge was "putting students at risk".

Bristol topped the waiting time table, with students waiting an average of 52.5 days for counselling in 2018-19.

SOAS, Hull, and the Royal College of Music do best, managing to keep waiting times at two days or under. 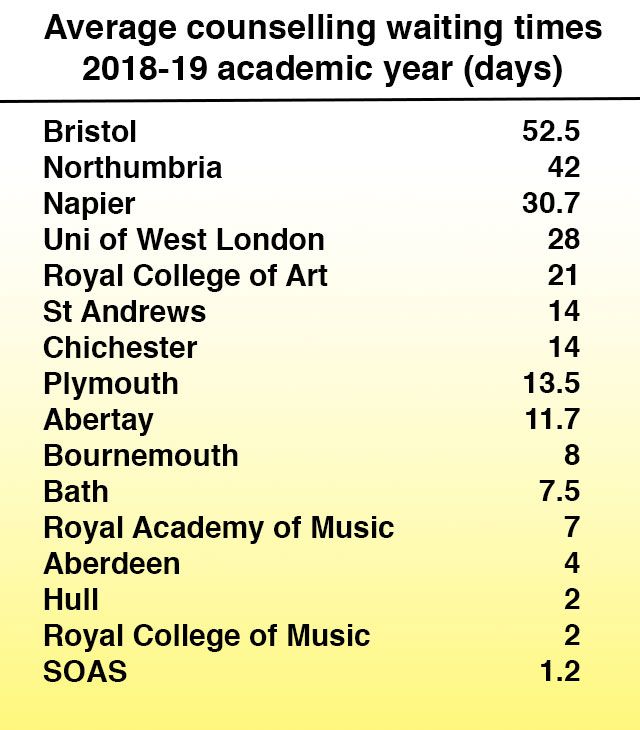 Of the unis with figures for both years, waiting times at Napier, Bristol, and Northumbria showed the biggest increases: 9.7, 7.7, and seven day jumps respectively.

Meanwhile, some unis managed to cut their waiting times, with Bournemouth and Plymouth delivering the biggest decreases.

The 2017-18 figures show more depth, as 46 universities provided data. Yet, the range of waiting times is largely the same. Whilst some unis manage to get students an appointment in a matter of days, others are pushing the wait to nearly two months.

"If we are operating in a fog, if we have no idea how long students are waiting… this is putting students at risk," MP Norman Lamb told the BBC.

"We know from the data that the longest waiting times could be over half a term for some students.

"We know also that there have been some tragedies among some student populations – students who have taken their own lives.

"If that happens while they are waiting for support, that's utterly intolerable."

• Happiness lessons and puppies: What are unis doing to help student mental health in 2019?

• Students are using confessions pages to talk about suicide, and nobody knows what to do