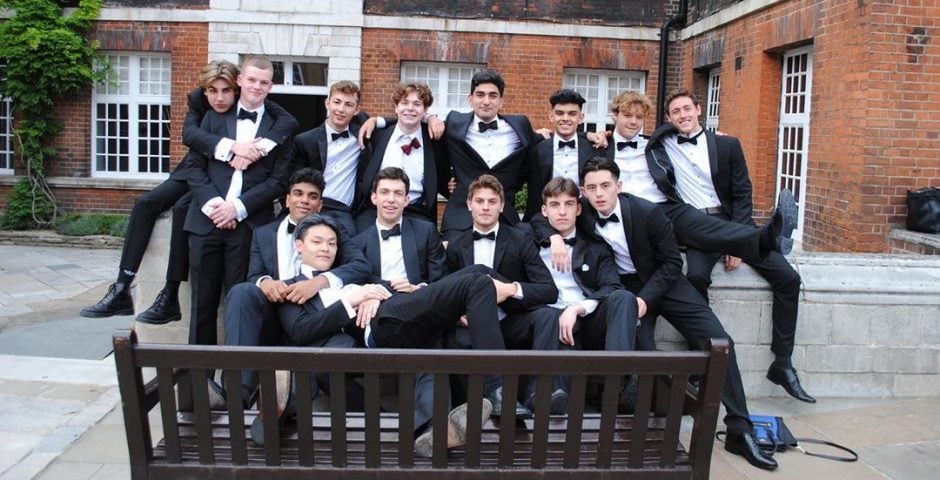 These are the UK’s most expensive private schools, if you’ve got a spare £30k

I guess Daddy’s going to have to find an extra £13,000 down the back of the sofa

Private school fees are always going to be expensive, that’s a given. But being reminded of quite how expensive is a shock.

We’ve collected the top 20 most expensive public schools in the UK using data mined by posho magazine Tatler for their Schools Guide 2020.

All of these are more than your uni tuition fees. For a term.

Serious feels…. Back to the glory years surrounded by my forever sisters. 10 years on… ?? #stmarysascot #reunion #backtoschool ????

St Mary’s Ascot is set in Berkshire with a term fee of £9,530. Imagine that the cheapest school on this list is STILL more expensive than an entire year at university. Wild.

A rare sight- our technical team yesterday, having a lunch break together! #wimborne #theatre #technicaltheatre #tuesdaytreat

Dorset’s Canford has Great Britain Olympic rowers Anastasia Posner and Brianna Stubbs amongst its alumni. It costs a lovely £9,657 to attend here every term and to attend boarding school, it’ll set you back £12,696.

It’s going to be a beautiful #BankHolidayWeekend! Wishing everyone a #HappyEaster ? Enjoy the sunshine – we’ll be back after the long weekend for the start of the summer term on Wednesday. . . #Bedales #Easter #Spring #IndependentSchool #Steep #Petersfield #Hampshire

Located in Hampshire, Bedales school costs £9,745 per term. Boarding school costs £12,400. Pupils are even allowed the luxury of calling teachers by their first names here.

But, actors Daniel Day-Lewis and Minnie Driver also attended the school. Some of you may know Minnie Driver as the woman who played Mandy in Ella Enchanted.

The rugby posts are up… must be almost the start of term!

Cheltenham comes in next. It costs £9,860 to attend Cheltenham College every term but remember, you can’t put a price on education. Pupils here have previously won gold and silver in British Alpine skiing Championships. Classic.

The guy who gets sliced in half at the start of the first Kingsman movie (Jack Davenport) attended here. He’s also the guy who played James Norrington in the Pirates of the Caribbean franchise. Fancy.

A sparkling array of frocks and suits on show in Yard last night, ahead of the Leavers’ Ball! #leaversball #prom #glamour #friends

Louis Theroux went here, which he reminded us of in May, when The Sunday Times ran a story headlined “Louis Theroux: gay sex was part of life for boys at Westminster School”.

Band Camp Day 1. Back in Wiltshire again after 2 years At Shrewsbury School.

This school is way out in Wiltshire and costs £9,915. Dogs are often known to be allowed to roam the corridors to give the school a more homely feel for the pupils.

Straight of Surrey (of course it is), Hurtwood House costs £9,916, a whole one pound more than St. Mary’s Calne. The experience must hurt as much as the price.

This school is notoriously hard to get into as you have to have a one-to-one meeting with the Head and his brother? Weird. But Emily Blunt attended this school so it can’t be that bad.

Disc'lame'r: As officially the first one to leave I feel like I am obliged to write a suitably emotional post, I apologise for the cheese in advance. I can't believe the day has come where I have to say goodbye to wycombe. It's been a weird and wonderful 7 years and I will honestly miss everyone who has made my time at Wabbey so special. To Clarence 2016, as it has been said countless times, I cannot imagine a more accepting, supportive, fun group of gals to grow up with and I will miss each and every one of you. I wish you all the luck in the world. #infidenahbae #constructionisdestruction #12n0 #queenclee

Our first £10,000 school on this list.Obviously this place is in High Wycombe in Buckinghamshire. It is £10,090 to attend here. It also has a sister school that’s just been opened in China.

Welcome back everybody. A new term is about to get underway and we can’t wait to meet and get to know our new Faulkner’s pupils as well as see familiar faces return #beautifulbradfield #College #school

Another spenny offering from Berkshire, Bradfield College is £10,360 every term. Apparently the food here is so good it has its own Twitter and Instagram accounts.

Sherborne School is also in Dorset. It costs £10,475 to attend here but when you’re basically attending Downton Abbey, did we really expect anything cheaper.

Based in Oxford, St Edward’s School costs £10,530 to attend every term. Last year three of their pupils attended Oxford university last year and a further 80 per cent go on to attend Russell Group universities, according to Tatler.

Our GCSE pupils are celebrating an impressive set of results today. Congratulations to them all and we're glad to see their hard work (and that of our staff) has paid off. #BryanstonSchool #GCSEResultsDay2019 #GCSEs #GCSEResults2019

Bryanston is situated in Devon and sometimes referred to as ‘Bry’. Probably some kind of inside joke, I guess. It costs £10,849 to attend Bryanston every term. Music is a particularly big subject here, with instrument and vocal lessons both being compulsory.

Welcome back to all of our pupils for another exciting and busy term! We would also like to offer a very warm welcome to our new pupils starting this year. #charterhouseschool #startofterm #backtoschool

Another posh school from Surrey, Charterhouse is £11,210 per term. Yes, we’re now in the big boi figures that are all above 10K. Charterhouse is very well-established school and is about to take on it’s first female pupils in 2021. About time.

On the bright side, Lord Rees-Mogg, father of our new fave political meme, Jacob Rees-Mogg attended this school.

Yet another public school in Wiltshire makes the list. Marlborough College is £12,605 to attend per term and 80 per cent of their students go on to attend Russell Group unis.

Both Jack Whitehall and Kate Middleton attended Marlborough, which is a weird combination but we like it.

Located in Oxford (again) Radley College costs £12,775 and is an all boys school. With 800 acres of lawns, there were presumably plenty of places for future England cricket captain Andrew Strauss to knock a ball around in his student days.

Miranda Hart attended Downe House. We like to think she spent her school years galloping down the corridors.

Downe House lies in Berkshire with an attendance fee of £13,050. Honestly, can they get anymore expensive?

Yes. Princess Anne (the Queen’s daughter) went to Benenden, a name which you can only say with an RP accent. This all- girls school will set you back £13,124 a term, BUT offers work experience in the local village shop, which is owned by the school.

Harrow costs £13,350 and was founded by Queen Elizabeth I. Winston Churchill and Benedict Cumberbatch went to Harrow. All the good things about Harrow will never compensate for the fact it’s not Eton.

Winchester College just missed out on our number one most expensive school but it’s still an extortionate £13,903. It’s in Winchester (no shit) and has even invented its own sport which is a mix of football and rugby. Don’t think this will catch on, somehow.

England was supposed to be rainy…

• The best public schools of 2016 according to Tatler

• How to spot a public school student