Okay, let me just put this out there: I have bad taste in men. Maybe it’s just me, but I keep ending up dating or seeing boys who have the emotional capabilities of a rock. A sexy rock, maybe, but a rock nonetheless. It’s got to the point where I’m sick of falling for boys only to realise they’re miles behind me in terms of emotional development. Having to do a thousand hours of unpaid emotional labour to try and bring them up to speed is frankly exhausting.

I’ve had enough. Time to speed up the process. But how do you find out who’s in touch with their feelings and who’s just a 14-year-old boy in a man’s body in the fastest way possible? Here’s how: I decided to message all of my dating app matches and ask them when they last cried and why, in order to find myself an emotionally mature man.

Why is this important? Because how a man responds to this question is a solid indicator of how well he handles his own emotions and also how well he deals with talking about emotions with a romantic interest. If he’s spooked then he’s not very emotionally mature.

Thought the ‘haha’ might make me sound less weird. It didn’t

I sent 27 of my new matches a messaging saying: “Hey, when did you last cry? Like shed a tear. This is legit haha, not a joke.” And it was only ignored by – get this – one boy. Ideal.

One boy responded: “Was probably relatively recently on a Sunday after a heavy night watching some sort of soldiers coming home surprising their families compilation.”

Wait – so does he know any soldiers? “I know no soldiers. Just find myself in a wormhole of emotional videos that I don’t stop myself watching.”

He asked if he’d passed the test, but there were more questions on my list. I asked if he was close with his mum, which is usually a pretty good indicator of how emotionally well developed a boy is. He said: “Yep, she’s one of my best ever friends. What about his dad? “Likewise. He’s a propa boy.” 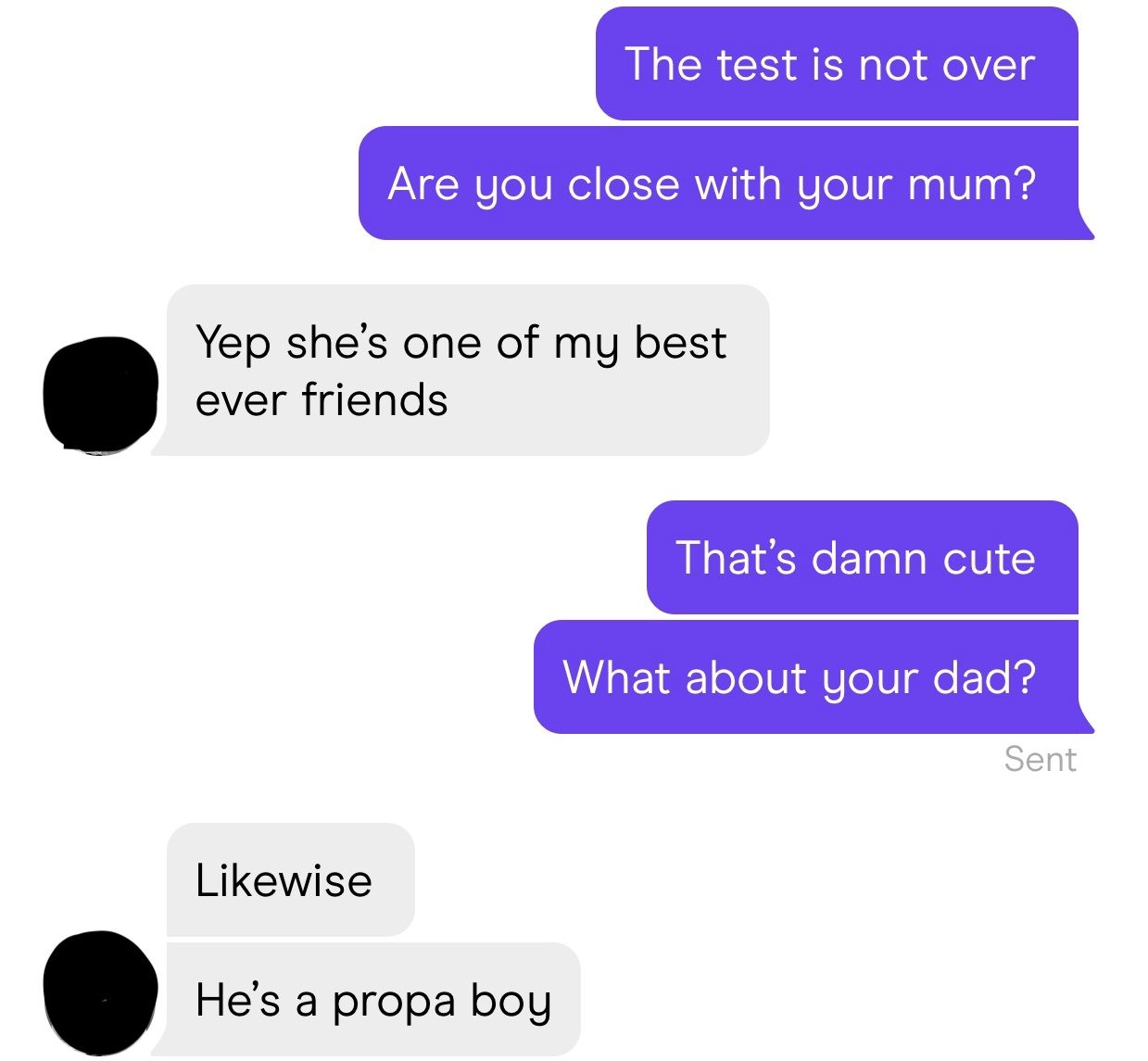 Fully fell in love with this man a little bit, not gonna lie. He replied: “Oh god, that’s a loaded question. I think maybe watching Beautiful Boy. Got a little choked up.” This was a perfect answer, especially because I cried at Beautiful Boy too – for a record four hours (the film kept buffering).

But why did he cry at that movie? He explained it was because of how helpless the main character was, which I thought was deep and pretty sexy.

Next I asked him if he was “emotionally pretty open” or not and he said: “I like to think I’m open regarding everything. Like I don’t wear my emotions on my sleeve but I’m always open to talk about anything or try anything.”

Pass or fail? He passed – with flying colours.

I honestly expected more of these responses but even one was disheartening. This boy said: “It’s a sad thing to admit, but I’m not an emotional person. I don’t cry.”

But why doesn’t he cry? And would he prefer to be a crier? He said: “Maybe I wasn’t breast fed as a child. And no, I like it this way. I don’t find crying helps me with anything.” What a legend. Extra lad points for this guy.

Pass or fail? Definite fail. Given that he thinks crying has no use, this leads me to believe he’s not very expressive of his emotions overall. A man who bottles things up is a worry and a possible wall puncher. No dates for him!

This boy said: “Ok ok, it’s when I didn’t get into Revs in CJ (Clapham Junction) last week because I was wearing Air Maxes.” I asked him if he was serious, and he said: “Yes, it cut my night short.”

Pass or fail? Fail. Points for funniness but not sincere enough. Probably not my future husband but prime shag material.

‘When I got my A Level results’

When did he last cry? “When I got my A Level results and thought I was gonna be a bin man.” That was it.

Pass or fail? Fail. I told him being a bin man was a perfectly respectable profession and moved on with my search.

‘I cried while watching About Time a few weeks ago’

He said: “I cried a few weeks ago watching About Time. The dead dad bit cut me, paired with that Nick Cave track.” Very fair answer. This scene also chokes me up without fail so I feel like we are on track for marriage.

But does he cry at fictional or real life situations more? “Definitely more at fictional things and music than real life.” Honest, but not ideal. But still passable.

Pass or fail? Pass. But I’d like a few real-life-prompted tears from my man if possible.

‘I cried at an episode of Queer Eye’

My kinda man! He said: “Ooh right in at the deep end. Probs at an episode of Queer Eye lol.”

But which episode? “Most of them tbh, last one I watched was the one on YouTube that they do for the dog and that got me welling up.” Interesting. Seems to have more empathy for dogs than humans. Moving on.

Next round. Does he consider himself pretty emotionally open? He said: “I think over the past few years I’ve tried to make a conscious effort to not be that ‘closed off dude’ archetype. So maybe not as open as I’d like but I’m trying my best!” Amazing answer. My heart is warmed and faith in men is restored.

‘When the cat I was babysitting went missing’

At first this guy kept talking about stories where he was crying with laughter, which simply does not cut it. I told him I wanted sad crying and sad crying only.

He replied: “Only thing I can think of is when I was babysitting the cats at home and I’d been working hard so was barely giving them any attention, and one went missing for a few days and I felt so guilty cos I thought she’d died alone.” This is actually quite sweet.

Pass or fail? Feel like I genuinely got to see this guy’s soft side. Also I like that he said babysitting and not cat sitting. Pass.

Those were just a few highlights out of my 20 something conversations on Hinge over the course of that day and let me tell you – it was the most I’ve ever enjoyed any dating app.

It cut through any bullshit, you could still tell if a guy was smart or funny from his response and most importantly, I got to see a side of these boys that normally would take weeks, nay months, to reveal.

I’m way more likely to take the candidates who passed this test on a date than my usual matches, and I feel like I trust them more. In fact – I might message the soldier-coming-home-video boy right now. But if you take anything from reading this, it should be that being vulnerable is actually pretty sexy. And don’t wear Air Maxes to a club.

• I asked all my exes for constructive criticism and wow, it got savage