On average, Russell Group unis are 77 per cent white

We already know the Russell Group unis have a problem when it comes to diversity, with grime artist Stormzy now offering scholarships for black students who want to go to Cambridge but would struggle to afford it.

The past year has also seen a number of shocking racist incidents on UK campuses. There was the Exeter group chat, the York student radio DJ who was called the n-word whilst she was live on air, and the black Sheffield student who had a banana thrown at him at Varsity.

A few months ago, a few people even said they had withdrawn their applications from Exeter following the group chat incident.

I’m eternally grateful that I decided to remove Exeter from my UCAS Uni options before I sent my application off. DODGED ?? A ?? BULLET ??

It is therefore maybe of little surprise to hear that on average the Russell Group unis contain 77 per cent white people. But which is the whitest?

The least white Russell Group university was Queen Mary University of London with less than half of its students being white at 41.95 per cent.

Here is the full ranking of how white each Russell Group uni is: 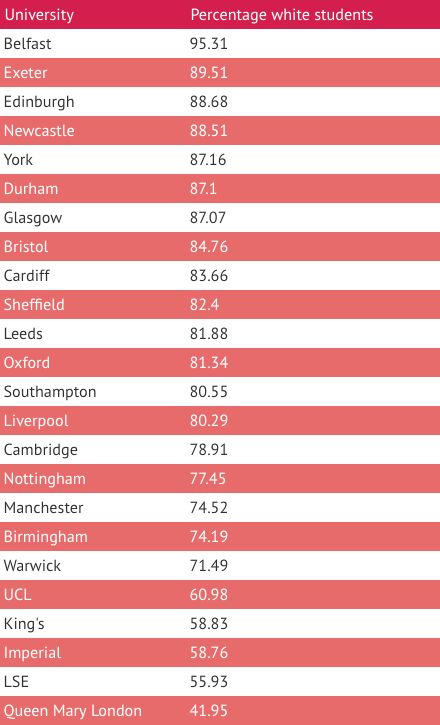