Love Island Gossip Column: The REAL reason Megan cancelled all PAs and which Islander cut their hair off?!

Which Islander cut all their hair off?!

Some thought she was recovering from surgery, while others assumed she wanted to spend more time with Wes. But it turns out the real reason Megan cancelled all of her PA appearances was because she wants to focus on making it as a "global superstar."

A friend explained to The Sun Online that Megan is keen to change her public image and wants to put her glamour girl reputation behind her for good.

They said:“She’s turned down over £100,000 of paid Instagram advertising in the last week alone and cancelled all her PA’s because she’s serious about making it as a model.

“Megan knows she’s too curvy for catwalk but wants to see what’s out there. She has meetings with big agencies like Select.”

It's full of cute photos videos of them together since leaving the villa. And you thought those two couldn't get any cuter.

"Ahohahoy" is spreading. It's a disease. Kill it with fire.

pls watch as his weirdness spreads to some other islanders

Posted by The Holy Church of Love Island on Tuesday, August 21, 2018

Don't worry, Paula aren't over, they were just bickering at a bus stop

When we reported that the couple were caught fighting by a bus stop yesterday, people started thinking that Paul and Laura have finally parted ways.

But in a message on Instagram, she wrote: "To answer any speculation – Paul and I have not broken up. We had a little bicker like any normal couple. Being in the public eye proves privacy is difficult, especially at a bus stop. #forgiveournaivety." Phew.

Laura has cut her hair and it looks really good

Jake Quickenden and Darylle are OVER

Darylle confirmed they had tried to make a relationship work, but it just didn’t take off. “We were seeing each other, but we’re both so busy at the minute and we live quite far away,” she said.

“We still speak and we’re still getting to know each other, but we’re not in a rush to go anywhere. He’s a lovely boy, we get on really well together. It would be nice, but we’ll see."

Remember Idris Virgo? The one who was extremely intense in the fireman challenge? Well, people have been tweeting pictures of Idris liking their photos from as far as four years ago. My bet is that Idris isn't actually creepy but he's invested in some liking bots.

Did Idris Virgo, the creep from #loveisland, just like my insta from 4 years ago? 😂😂😂 pic.twitter.com/kHs3SsiptF

Last night in Blackpool Georgia walked into a club with "These hoes ain't loyal" blaring in the background. The DJ kept shouting over it "Georgia's loyal." Cringe.

Imagine actually making that "your thing" after everyone rinsed you for it. It's even in her bio.

Georgia is literally a Fiat 500 girl

When she was moving in with Sam last week, she was driving a packed up Fiat 500 with all of her things stuffed in her car. So yeah, it's confirmed. Georgia is literally queen Fiat 500.

She wrote: "One thing I keep noticing is young kids scribbling there faces out when uploading pictures with me and jack or even with friends. It really upsets me that you don't feel good enough to show your beautiful face in the photo! Please be proud of who you are. And stop scribbling your face out I want to see all of your beautiful faces." 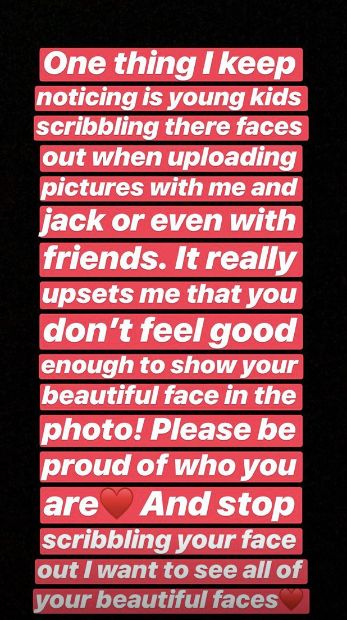 Are New Jack and New Laura still together? Because they haven't posted any pictures of them together in a week

They may keep commenting on each other's posts with love heart emojis but the couple haven't posted anything of them together that's not to do with PAs for a long time. Or maybe they have a real relationship and don't need to publicise it on Insta… Who knows? 👀

She said: "I had bulimia and an eating disorder since I was 16. Being a surfer and traveling the world and modelling put all these pressures on me as a girl growing up in that industry. I was 21 when I got better. I’m 23 now."

She says she feels much healthier now. Mentally and physically. She continued: "An eating disorder is a mental illness. It f**** you up in the head and it shows… It’s hard to let go, but once you do you get your life back."

• Inside Jack and Dani’s BEAUT flat and which ex-Islander got ‘proposed’ to?!