Breaking: The lecturer strikes are officially OVER

Have never wanted to go to uni so badly

After weeks of missed lectures, picket lines, and industrial disputes, the lecturer strikes are officially over.

Members of the striking union, the UCU, have voted to accept a proposal by Universities UK to end the ongoing strikes over a change to pensions.

Sally Hunt, the General Secretary of the UCU, hailed the deal as "won through the amazing strike action of UCU members."

In the member consultation on the #USSstrike ballot, 64% of members who voted voted to accept the proposals on a record 63.5% turnout. All strikes are suspended. Message has gone to members. More on https://t.co/DjyFmHIKhv shortly.

UCU members voted by a margin of 64 per cent to 36 per cent to accept the proposal, in a record turnout for the union.

All strikes have been suspended as a result, meaning that disruption to exams will be minimised, after it was reported that strike dates would target exam dates for maximum disruption.

The strikes have seen students starting petitions asking for refunds over missed contact hours, occupying university buildings, and reports of assault as students yelled at others for actually going to their lectures.

Changes proposed by UUK to the University Superannuation Scheme (USS) pension plan could have cost university staff up to £10,000 a year in retirement.

In March, UCU branches voted overwhelmingly to reject a deal that would have brought an end to the strikes.

However, with this new deal being struck between UUK and the UCU, strikes have been suspended. 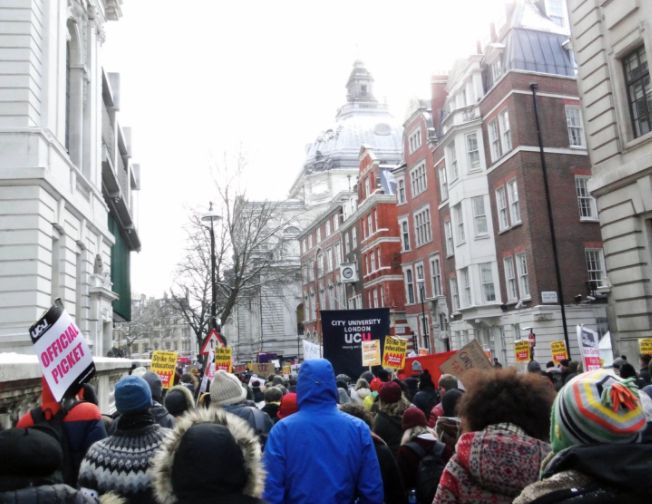 UCU general secretary Sally Hunt said: "Members have participated in record numbers in the consultation, with a clear majority voting to accept the proposals. The union has come a very long way since January when it seemed that the employers' proposals for a defined contribution pension were to be imposed.

"Now we have agreement to move forward jointly, looking again at the USS valuation alongside a commitment from the employers to a guaranteed, defined benefit scheme. USS, the regulator and government now need to ensure that UCU and UUK have the space to implement the agreement effectively.

"We hope this important agreement will hearten workers across the UK fighting to defend their pension rights and was won through the amazing strike action of UCU members.

"UCU has more work to do to ensure that the agreement delivers the security in retirement that university staff deserve. On behalf of all UCU members I want to say thank you to students and other staff for their inspiring support throughout the dispute."

Get breaking news straight to your WhatsApp by clicking here and sending a message with the name of your uni. If you have any tips, message us on +44 7715 750931.