A Computer Science course spreadsheet was inundated with racist comments after a professor shared it with his first year students at the University of Southampton.

The spreadsheet was open to all students on the course who were able to edit it to say what topic they wanted to do a presentation on.

However, when the best topics got taken quickly, members of the group began to write racist and homophobic comments including the terms "n****r" and "f***t".

Readers should note, the following screenshot contains uncensored language of an offensive nature. 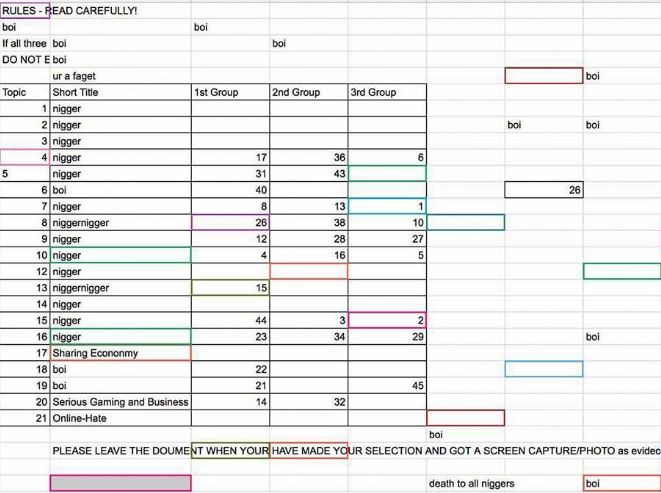 The spreadsheet sent to students on the Computer Science course

The students began by simply deleting the entries of other students, meaning that their chosen topics were no longer taken. It then very quickly escalated to posting pictures of Hitler as well as anti-semitic, homophobic and racist comments.

In addition to writing "n****r" on the spreadsheet, comments also included "hands up don't shoot", which refers to a slogan belonging to the Black Lives Matter movement in a clearly racial attack.

The Tab have been told there are fewer than five black students on the course, however it is not clear whether the comments were directed at any of them specifically.

The Tab are yet to discover the identities of the students who wrote the racist and homophobic comments.

The professor for the course who started the open spreadsheet, Professor Hugh Davis, sent an email to all the students involved saying: "It seems the idea of making a selection was too grown up for a small number of you who choose to deface and alter the document.

"I've closed the document and will allocate topics to you instead. I'm really sorry to many of you who did a proper job." 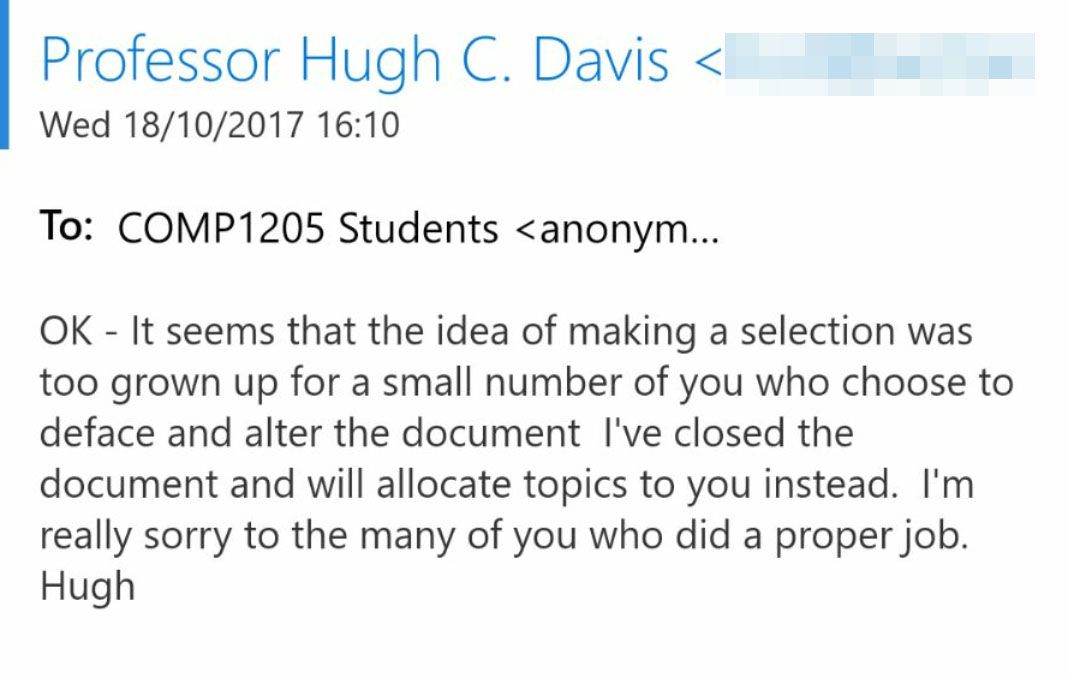 He took the spreadsheet down after 15 minutes of it being live after having seen what the students were writing on it.

This email was shown to members of the African and Caribbean Society, many of whom said that the email didn't properly address the severity of the comments made. 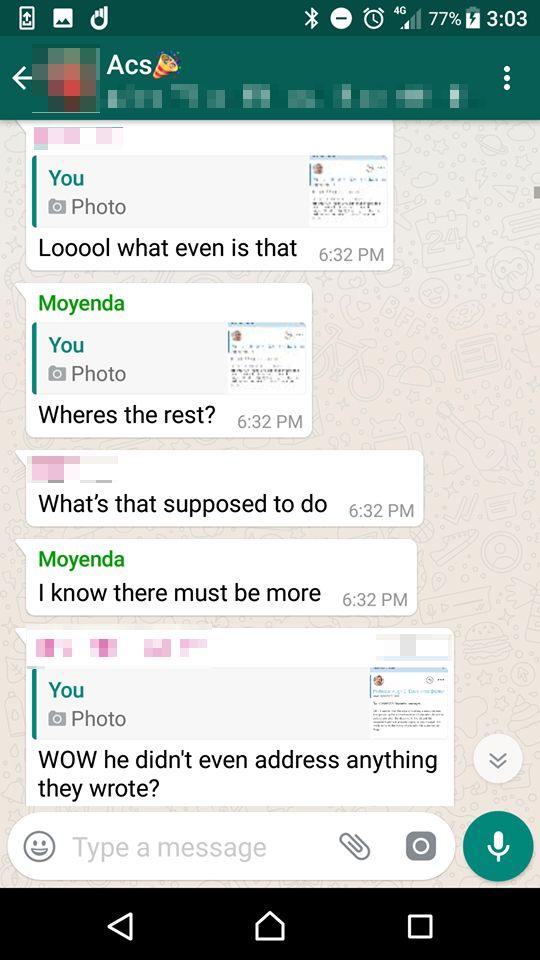 Comments made about the professor's email on an ACS group chat

Professor Davis has since made a further comment, condemning the offensive behaviour: "Like many of you, I was deeply upset by the behaviour of possibly just one student yesterday who went well beyond the realm of childish behaviour and decided to put racially and sexually offensive comments into our shared spreadsheet, and alter the content of the sheet.

"It was undignified and offensive. As a disciplinary offence, it is now outside of my hands. The University authorities are handling it."

A member of Southampton Uni's African and Caribbean Society, who wishes to remain unnamed, but is in their first year studying Medicine, was shocked at what had been written when they saw screenshots of the spreadsheet. They told The Tab: "I was very shocked because university is place for diversity and a chance to meet and interact with new people.

"There are going to be people who have left home who may even be from another country so seeing something so offensive could knock their confidence. It also heightens their sense of danger because they're already in an unfamiliar environment, but to top it off, they're receiving hate for something they cannot control.

"If these people have the confidence to say that in lectures then they can do anything."

According to a spokesperson from the University of Southampton, a formal investigation was launched immediately. The next day, during a course lecture, the students were told that this behaviour is unacceptable and there would be consequences for the guilty parties.

The university has stated that if any student is found guilty they will be expelled from the course.

Each student was contacted individually asking for further information which could lead to identification of the perpetrators.

When contacted by The Tab, the university said: "The University of Southampton took this matter extremely seriously. Staff removed the offensive material within 15 minutes of being alerted. The University launched an urgent internal investigation and informed the police.

"The University has a zero tolerance policy against racist and other forms of offensive behaviour.

"This incident was utterly unacceptable and the University condemns, in the strongest possible terms, the behaviour of those who sought to cause offence and harm through their actions.

The police have also been informed, but no formal action is being taken as of yet.

This is the latest racism story to arise in a series of scandals across UK universities.