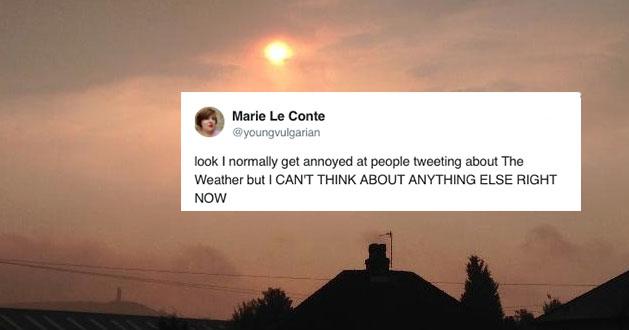 We’re all definitely about to die

Look outside. Right now. Everything is fucked up beyond comprehension.

The sun is red, the sky is a dark orange. The birds have stopped chirping. It's the apocalypse.

In times of peril, everyone's first reaction is of course to whip their phone out and tweet about it.

Here are the best tweets from people who are not coping well with the sky looking a little different today.

Tfw you're standing at a bus stop looking at the sky & a little old lady whispers to you, "It has begun… The Reckoning."

Hello, and welcome to the Apocalypse, live on BBC News pic.twitter.com/UuG9gdXDg1

this is fine this is not linked to the red sun at all this is completely fine pic.twitter.com/plYinA3qCn

Took a pic of the red sun and when I put a filter on it a plane appeared that no one could see? ? Count me out this is some weird shit ?? pic.twitter.com/hXMUN6uE0H

THE END IS NEAR #redsun #London pic.twitter.com/u0MvbySdMt

I think this might be it guys. It’s been mostly fun but the last couple of years pretty awful so on balance we probably deserve it #RedSun

Praying that this red sun is a sign that the world is ending. I've had enough x

Getting the hell out of London #redsun pic.twitter.com/oivlvJ1cLN

Today is the day we die, the apocalypse is coming. Lock your doors and remember to remove the head or destroy the brain #RedSun red sun pic.twitter.com/C6Vx8QNMU0

Can you imagine seeing this sky pre-information age when we had no idea about #Ophelia? I'd be freaking the fuck out.

the sky in london rn is extremely my aesthetic

Red sky at night, shepherd's delight,
Red sky in the morning, sacrifice your least interesting child to the sun god without mourning#REDSUN

The sky is seriously weird today. This ominous orange is not good for the imagination of a lapsed catholic. pic.twitter.com/ivdhVACi2y

I wonder what the official UKIP explanation for this is… #Ophelia pic.twitter.com/TYb0qucAyA

Right, it’s the end of days, thanks for the memories but we’re all definitely about to die. Hold your family close and tell them you love them.