What Love Island contestants actually do, according to their LinkedIns

It’s hard to imagine anyone from Love Island existing out of the villa, sitting behind a computer in the real world wearing a suit instead of a bikini. But believe it or not, there was actually a time when Amber was pale, when Theo was one of those guys trying to sell you JuicePlus+ on Facebook and Montana sold mascara behind the Estée Lauder counter.

We’ve all seen their Instagrams, but what about their professional profiles? We found the contestant’s Linkedins to find out what they actually do and how they portray themselves professionally. 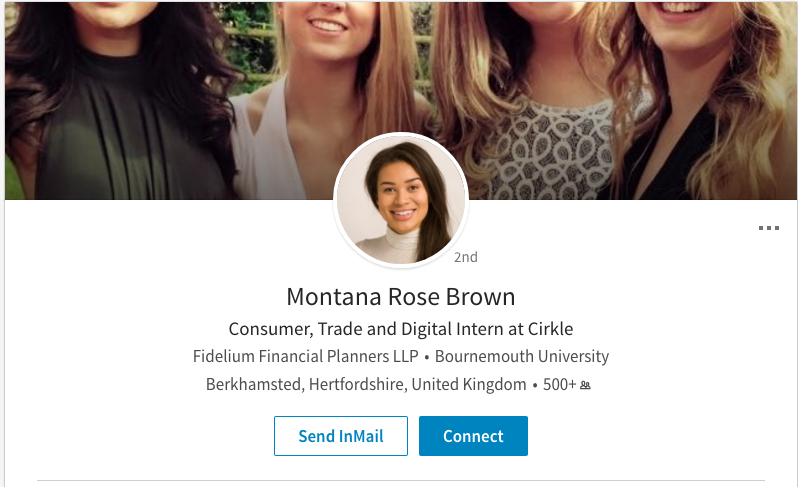 Looking through Montana’s profile will make you feel awful about yourself. Despite only graduating from Bournemouth uni this year, she’s had more experience than most people ten years older than her.

She’s spent a year and a half as Client Services Executive at Fidelium Financial Planners, four months as a Trade and Digital intern at Cirkle, interned in PR, film, events, radio and marketing. She also worked as a shop floor model at Hollister, waitressed and worked behind the counter at Estée Lauder.

While she was at school, she was captain of the netball team, fundraised for Cardiac Risk in the Young, was part of the chamber choir, interned at multiple places, taught drama, and was a teaching assistant at a primary school. 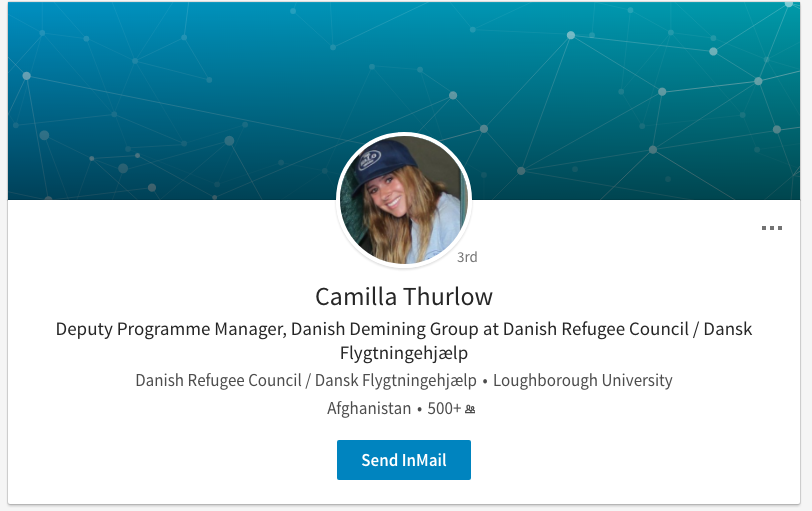 Camilla’s insanely intimidating Linkedin will come as a surprise to nobody, after all, she defuses bombs for a laugh. After smashing 9A*s 2As at Fettes College where she was Head of House and a prefect, she got a first from Loughborough where she also won awards as captain of the Lacrosse team.

She has over 500 connections and glowing recommendations. “She has never failed to amaze me”, said one, “A talent so unique and dedicated as Camilla will succeed in any endeavour she chooses to pursue”, said another.

She can speak French, has a Level 3 Explosive Ordnance Disposal qualification and has been endorsed for recruiting, leadership and fundraising. Wbu? 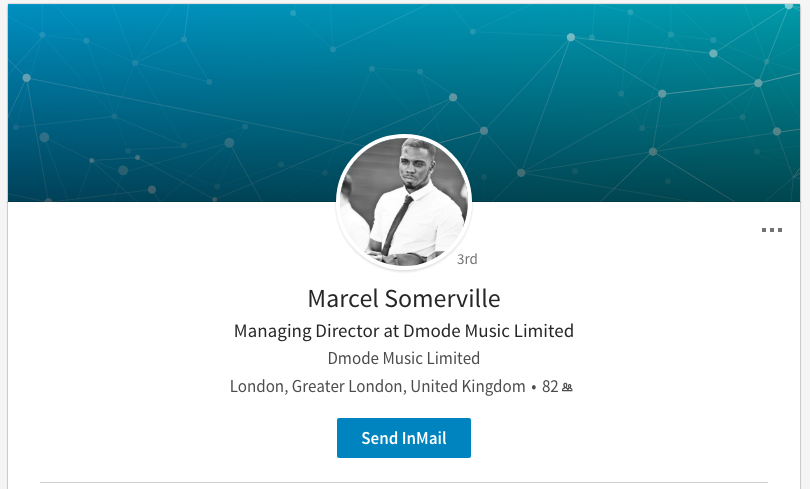 Of course, the highlight of Marcel’s profile is his 2001-present role (16 years) as ‘Musician at Blazin’ Squad. Since his Blazin; Squad career he worked as an Account Manager at PPL then onto the business side of music, working as Director at Dmode Music Limited.

Despite his experience, Marcel’s featured skills include Microsoft Word, Microsoft Office and Excel, which he’s still waiting to be endorsed for.

Under his accomplishments, he’s listed ‘Language – English’. But look how handsome his prof pic is!!

While Dom doesn’t have a LinkedIn profile, he worked as a careers advisor in Manchester before joining the show. Before that, he worked as a Sales Assistant at AllSaints in the Arndale Centre. His colleague Sabrina Patel told The Tab: “I only worked with him for a few months, but he was always super friendly and so much fun to work with.” 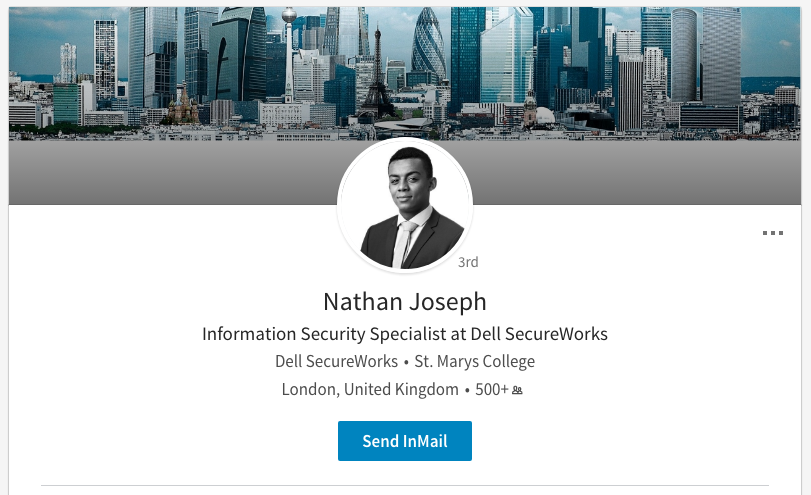 One glance at Nathan’s profile and you know he means business. The heavily-filtered city backdrop cover image, the 500+ connections, the smouldering black and white eye-fucking headshot (he’s winking at me right) screams “dw I got this”. 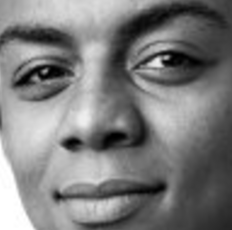 Nathan doesn’t have time for your bullshit, fitting his bio into one (kind of long) sentence: “I help organizations make better business and investment decisions that will guide their technology strategy, enhance their information security posture to ensure business continuity, minimize risk, leverage current resources and maximize ROI.”

Since his BSC at St Mary’s College, he’s worked as a Specialist Consultant and an Information Security Specialist – helping IT organisations comply with regulations and protect their assets.

“I am ready for everything that’s thrown at me”, Amber says on her dance profile, where she specialises in Live Performance, Musical Theatre, TV and states she’s not open to performing naked. 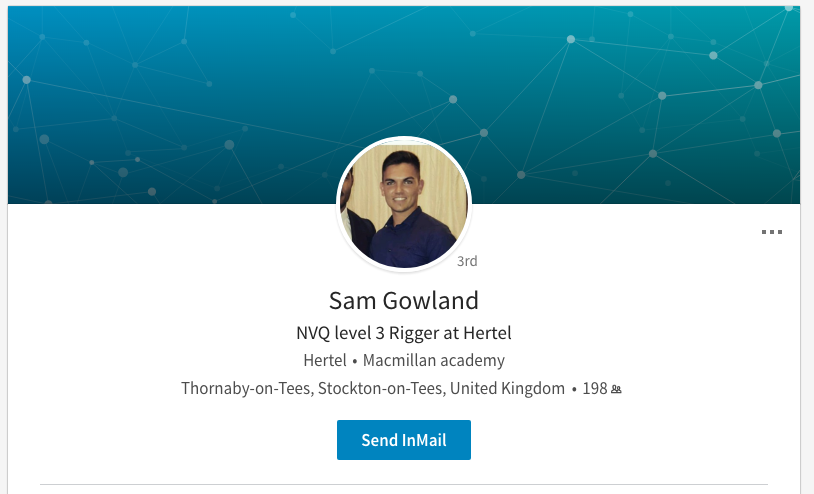 “I consider myself as highly motivated individual”, says Sam, who’s been an oil rig worker for Hertel since 2013.

He’s been endorsed for skills in “oil & gas” “petroleum” and his interests include Shell and BP. 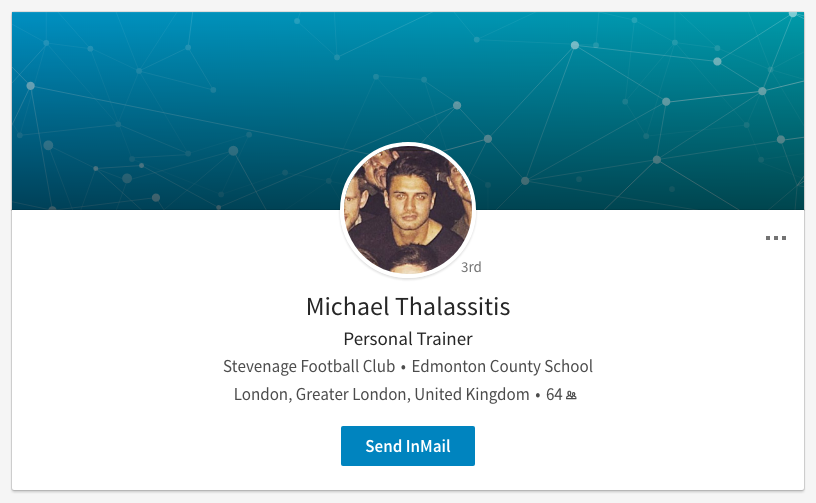 Well a career with Stevenage FC isn’t exactly top tier football is it. His two interests are David Lloyd Leisure Centre and Hayes & Yeading United FC and look at this guy is in the background of his profile picture: 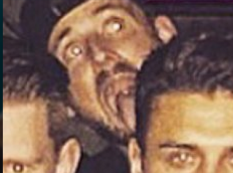 Georgia works as a PA, and has appeared on Towie. 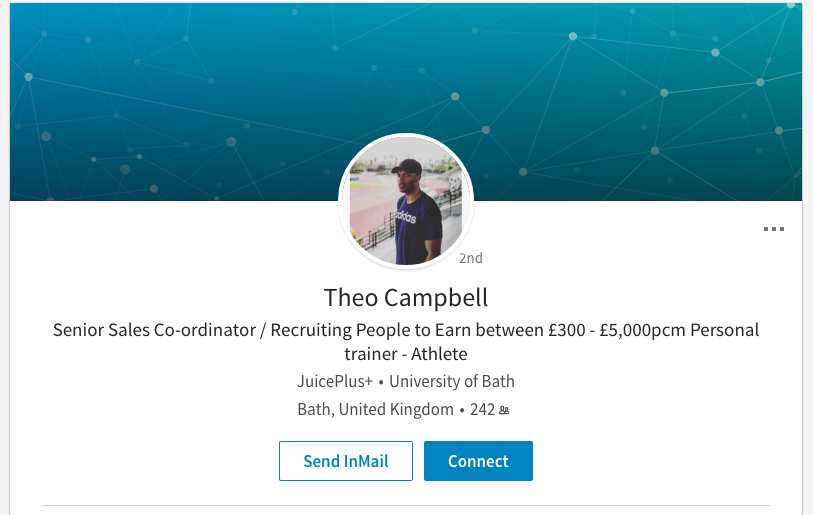 Yeah he’s a GB Athlete, so it makes sense that most of his profile is dedicated to recruiting people to join his network marketing franchise selling juice powders.

As a Sales Coordinator at JuicePlus+, his bio mostly consists of “guys you can earn £300 – £5,000 a month from the comfort of your own home!!” without really explaining what it actually is. 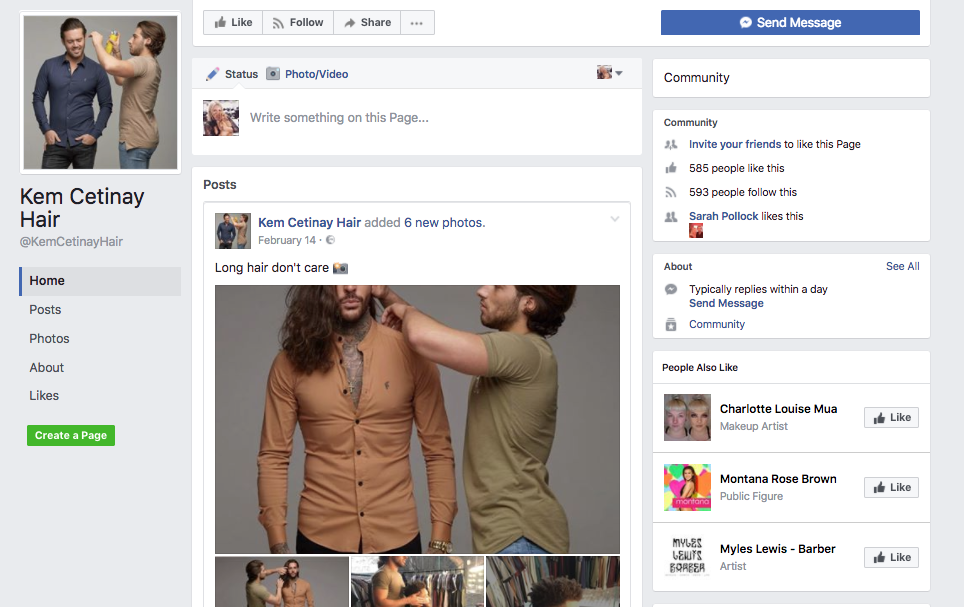 While he doesn’t have a LinkedIn, hairdresser Kem has his own hairdressing Facebook profile which shows pictures of him styling Spencer Matthews and Pete Wicks. 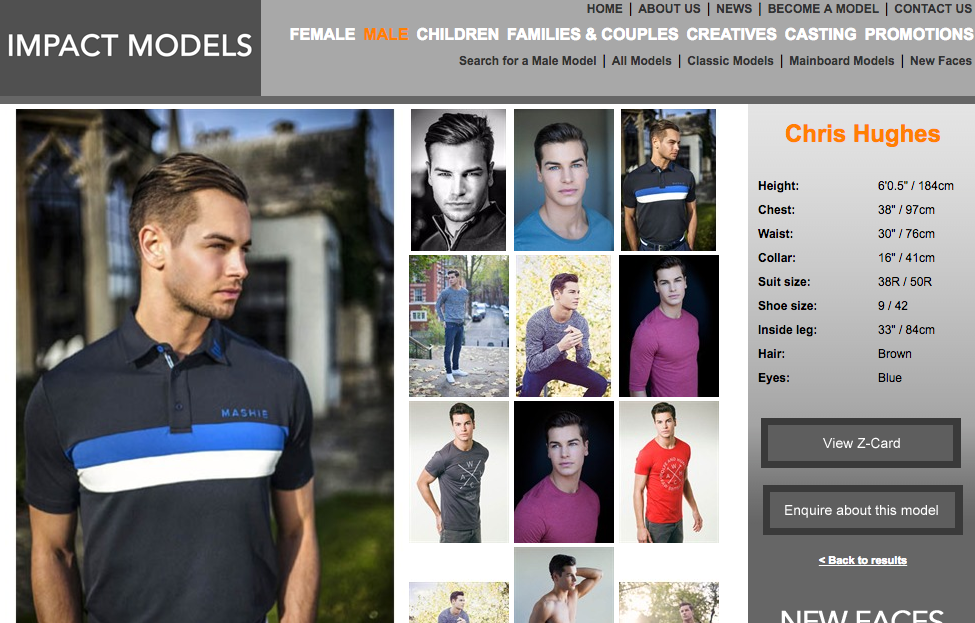 Again no LinkedIn, but WOULD YOU JUST LOOK AT HIS MODELLING PROFILE! 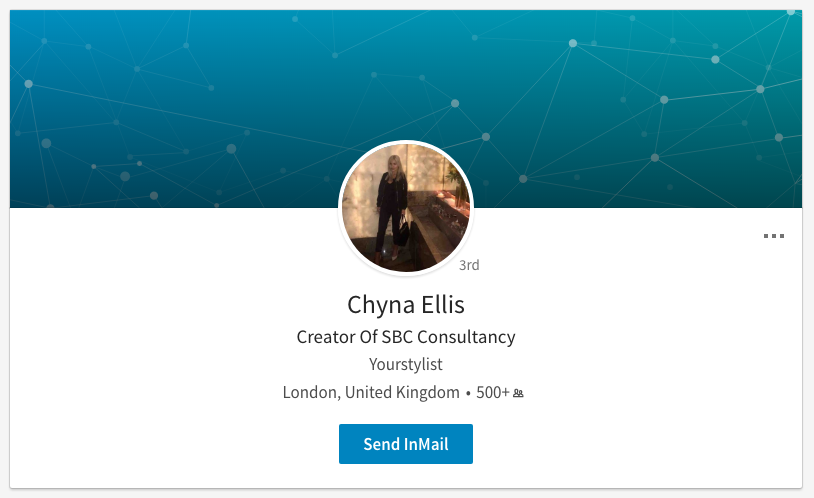 Talking about herself in third person, Chyna describes herself as “qualified creative consultant & fashion stylist.” She’s got a degree from LCF, can speak Spanish and launched her Personal Styling Consultancy service based in Essex. But it looks like she doesn’t want anyone to know how to get in contact:

He hasn’t got a LinkedIn, but before joining the villa Jamie was a model and actor from Essex. He also made an appearance on E4’s brief Made-In-Chelsea style reality show Taking New York. Skip to 0:18 and your mind will be blown. 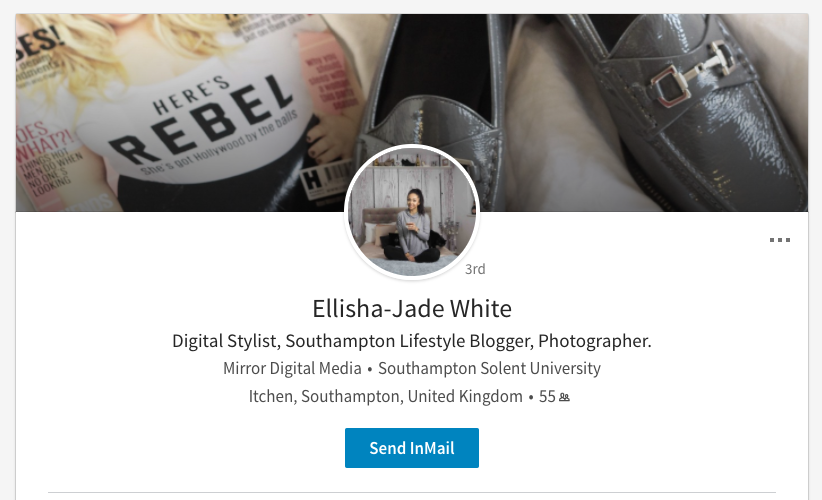