She argued that male pregnancy infringes on ‘nature’s flourishing’

A University of Nottingham professor has been criticised for comparing transgender people to Frankenstein in an online article.

The article written by Alison Milbank, an Associate Professor of Literature and Theology at the University of Nottingham, draws a parallel between men and women being able to stage surgical intervention to change genders and Dr. Frankenstein to create the Monster out of body parts of corpses.

A spokesperson for the university's LGBT+ Network called the article "particularly hurtful", and told The Tab Nottingham that "this has highlighted the need for LGBT+ welfare training for people at university who have students under their care". 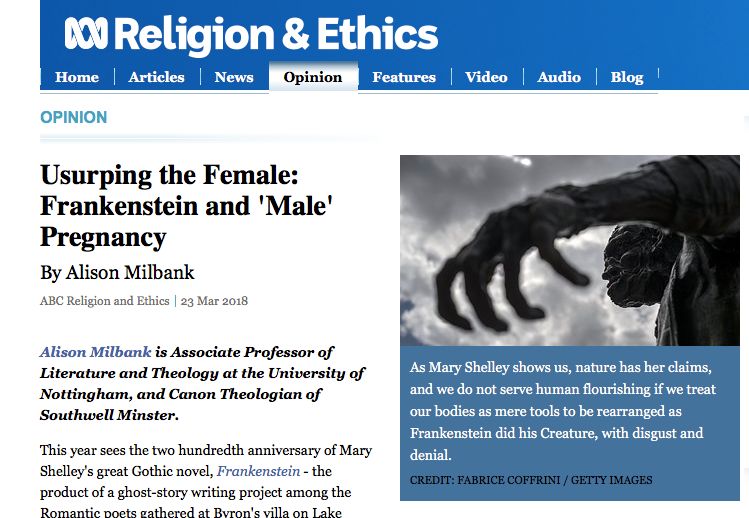 The released article, now removed from the ABC website

In the article, on the ABC's website Religion & Ethics section, Milbank comments on the recently released documentary A Deal With The Universe, a film about a man acting as both male and female roles in conception, pregnancy and birth, because his wife could not conceive.

Milbank states that, similarly to Frankenstein's actions in the famous novel, the 'mutilation' of one's limbs and organs seizes "both the divine act of creation and also the maternal role in giving birth."

The theology professor goes on to comment on the author Mary Shelley's novel: "As Shelley shows us, nature has her claims, and we do not serve human flourishing if we treat our bodies as mere tools to be rearranged as Frankenstein did his Creature, with disgust and denial."

The article has since been removed from the ABC website, but a cached version is available, linked in the above tweet.

In response, John Milibank (unrelated), a Research Professor of Religion, Politics and Ethics at the University of Nottingham, and director of the Centre of Theology and Philosophy, expressed his disdain relating to the incident, saying "Free Speech is nearly at an end!"

The Australian Broadcasting Company has now removed from their website Alison Milbank’s article criticising ‘male pregnancy’ basically because people ignorantly suppose that ‘Frankenstein’ is the name of the monster, not it’s creator. Free Speech is nearly at an end!

A cached link to the article is linked below in a tweet by Matthew Schmitz, Senior Editor of the First Things Magazine:

So, Alison Milbank wrote an article for @ABCaustralia on how male pregnancy usurps the role of women, “effacing their collective claims for justice & good treatment.”

Now her article has been deleted—effaced—from the ABC site. Here is the cached version. https://t.co/LmWZxp4V1w

The Campaigns Officer and Spokesperson for the University of Nottingham LGBT+ Network told The Tab Nottingham: "As a transgender person, but also a person of faith, the article was particularly hurtful to read. As a Campaigns Officer for the LGBT+ Network, this has highlighted the need for LGBT+ welfare training for people at university who have students under their care.

"Regardless of people’s opinions, they need to recognise that LGBT+ people are their students. They may be ‘out’, or may be ‘in the closet’, but they will all be affected by such hurtful words. Students' welfare should be of prime concern."

The Tab Nottingham contacted Professor Milibank via email in which she said: "In response to those who have misread the article, I should like to point out first, that this feminist argument is specifically about male pregnancy, and not about transgender identity as such, prompted by the example of a documentary about a man who had changed gender from being a woman, who 'impregnated' his female partner with his own eggs, and then had the foetus back to give birth."

"He used the language of masculine empowerment for the whole procedure. Secondly, I discuss features of cross-gender culture which are sometimes seen as unacceptable to feminists."

"Thirdly, my focus is not on the Creature – whom I would never name as Monster – but on Victor Frankenstein himself. I was quite careful to avoid ambiguity on this issue because those who have not read the novel do sometimes assume that Frankenstein is the Creature."

"At no point do I compare trans-gender people either to Dr Frankenstein or the Creature, nor do I compare the process of sex-change to the creation of a monster."

"Fourthly, I should like to emphasize that none of the responses I have seen engage with my arguments and I resist any attempt to silence women's voices."