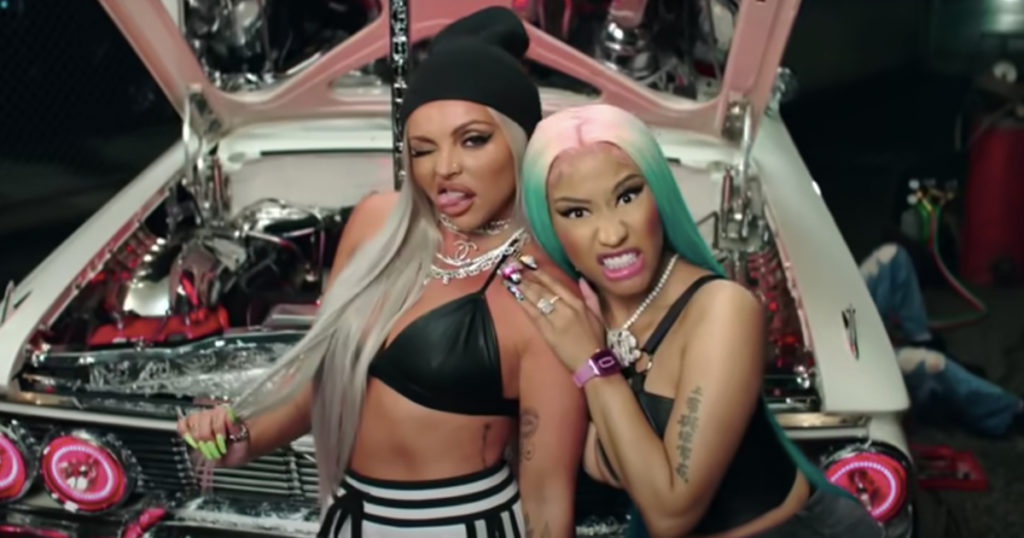 Last night Jesy Nelson and Nicki Minaj went live on Instagram together. They spoke about their recent song Boyz, as well as the blackfishing accusations Jesy Nelson has faced since leaving Little Mix last year. But what’s got everyone’s attention is how the pair spoke about Leigh-Anne Pinnock, or more so the way Nicki spoke about her and the fact Jesy didn’t do anything except laugh. Fans of Little Mix, especially the ones who have continued to support Jesy, are very pissed off because Jesy failed to support her mate when Nicki was going IN on her in front of over 100,000 people.

People are either really upset, sharing love for Leigh-Anne or just making memes out of their Instagram live. Here’s what they all had to say:

A lot of people were disappointed in Jesy, especially since having watched her documentary with the BBC on mental health. One person on Twitter said: “Jesy Nelson made an entire documentary on the BBC about being kind and trolling online, but just sat and laughed as Nicki Minaj slated Leigh-Anne Pinnock to 100,000 viewers on a live. That does not sit right with me.”

Another person said: “Next time Jesy wants to make a documentary about bullying, be sure to include the clip of her sitting in silence letting someone tear apart someone whilst laughing.”

A lot of people have found that Jesy sat back and allowed Nicki to talk badly about Leigh-Anne really uncomfortable to watch. Someone tweeted saying: “If you still support Jesy Nelson please leave. Unfollow me, block me, I don’t care but just don’t be on my page.”

if you still support jesy nelson please leave, unfollow me, block me, idc. just don’t be in my page.

This person shared screenshots of Jesy’s reaction to Nicki calling out Leigh-Anne. They captioned them with: “The reaction of someone who has just heard someone insult their ‘sister’ who is literally the most unproblematic person ever and who just had two babies. Fuck Jesy Nelson, fuck Nicki Minaj and leave our girl Leigh-Anne out of your lying mouths.”

the reaction of someone who just heard someone insult their “sister” who is literally the most unproblematic person ever and who just had 2 babies… fck jesy nelson, fck nicki minaj and leave our girl leigh-anne out of your lying mouths pic.twitter.com/X0gSSJ8YTH

And obviously some people on Twitter are just straight up making memes and showing their support for Leigh-Anne. One person wrote: “Nicki Minaj saying Leigh-Anne Pinnock is jealous of Jesy Nelson? Sorry, come again?????”

Another person said Leigh-Anne is “one of the loveliest, most genuine people” they’ve ever interviewed and “To see her vilified to 100,000 people was very sad indeed.”

Leigh-Anne’s one of the loveliest, most genuine people I’ve ever interviewed.

To see her vilified to 100k+ people was very sad indeed.pic.twitter.com/AMsHAZPbs9

On top of all of these reactions and love for Leigh-Anne, people are obviously making memes as well. Someone said: “Anytime I see Nicki Minaj or Jesy Nelson on my timeline” and attached a video of Gemma Collins saying “Nah, not for me. Fucking not for me.”

Anytime I see Nicki Minaj or Jesy Nelson on my tl. pic.twitter.com/J7V29EaQdN

Another person who watched Jesy Nelson and Nicki Minaj on Instagram live said: “Jesy Nelson’s single rollout should be studied on marketing degrees for how NOT to do pretty much everything.”