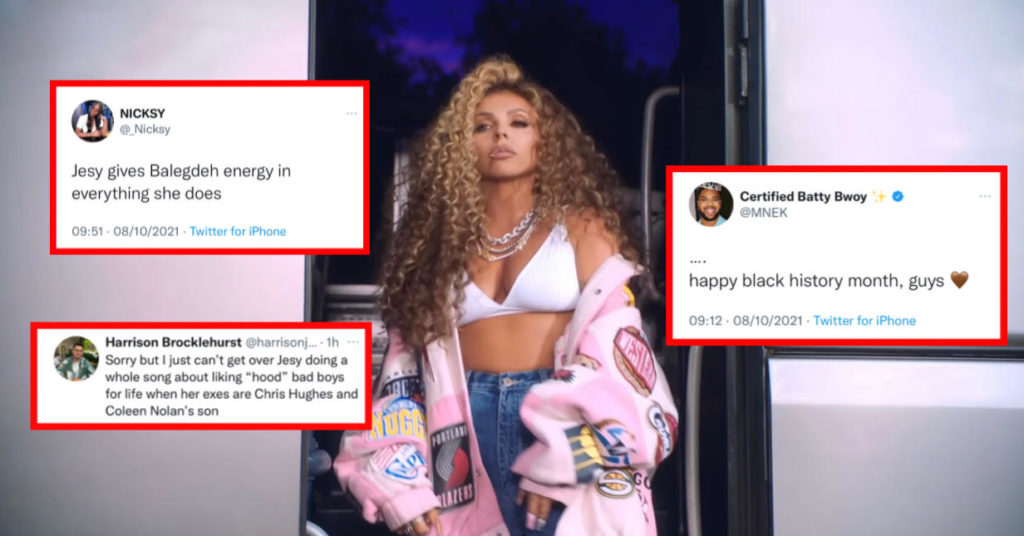 Well, the self titled “UK Baddie” has finally arrived with her debut song Boyz. Featuring the antivaxxer that “went to school with Marg-ret Thatch-or” herself, Nicki Minaj. And despite frequent allegations of blackfishing over the last year, Jesy Nelson has stuck to her guns and released her solo single and video to a largely critical response. Of course, when big pop moments like this happen, Twitter will always explode into a cacophony of opinion. Here are some of the best Twitter reactions to Boyz, the debut solo single and music video by notorious bad boy dater Jesy Nelson.

1. Where are the bad boys you speak of in your love life please Jesy?

2. The Beaker energy of that music video is unbelievable

3. Who signed off on these lyrics please

Jesy singing she likes them “so hood, so good, so damn taboo” where does this bangers and mash english girl think she knows hood mandem from???

4. The question on everyone’s lips

sorry but i can’t stand jesy nelson why is she getting away with branding herself with this whole “hood” blackfishing aesthetic when she’s 100% white and from ROMFORD ??????

5. A tough day to be a Nelsonator

That mad Jesy Nelson fan account is going to have a field day today defending her.

6. I would have preferred this aesthetic than what we got

7. Bad boyz for life though!

The FUNNIEST thing about this is Jesy Nelson’s ex is Chris Hughes from Love Island. Olivia had that man on ropes every week and told him to stop crying

8. Sorry but what is happening here may I ask

NOT JESY NELSON AT 7:55AM IN LEICESTER SQUARE 💀 pic.twitter.com/BkxUHsKHZW

9. Our Lord and saviour Alexandra Burke did it better let’s face it

That Jesy Nelson song is nothing on the true Bad Boyspic.twitter.com/QlYfvgDX1t

When Diddy made a cameo calling Jesy “Jeezy”, was everyone not embarrassed? Nah if I keep talking they’ll put my tweets in her next documentary

If you've ever seen any R&B/hip hop artist in concert and watched in horror as a bunch of white people loudly sing along with the N word…that's exactly who this Jesy Nelson single is for. Hideous.

12. Can’t stop thinking about this

13. Everything about it is so off

Jesy Nelson gone solo, coining herself as the U.K. “badee” singing I want a bad boy-why is she at 30,so desperate to take on this hood persona when she’s from Romford,born to a business man &a police woman.

strange-ps the song is awful, but I guess I’m not the target audience pic.twitter.com/H6FjqH76xt

14. She will never live down that balegdeh energy

Jesy gives Balegdeh energy in everything she does

15. Her appearance on Capital FM this morning to promote Boyz has gone down badly

Glowing? Or is she now black?

16. MNEK, who has written several of Little Mix’s hits with them whilst Jesy Nelson was still in the band, tweeted some shade

17. And then an important thread

so….. from the heart, I just wanna take this time to promote some talented BLACK female artists who I feel deserve more of the shine than others (others being white people, yes, get uncomfortable) are getting ..

Why is Perfectville full of white people and then it gets horrible when the NEEGURS and Jesy arrive? Does she think she’s one of us?

20. Jesy Nelson is so brave for sitting on that roof

this is in the youtube comments like is this the best compliment you could find sis? pic.twitter.com/OXoeNNC5KD

21. Why is nobody saying anything to her? Where are her team?

can’t pretend i don’t fake tan but i respectfully remain within the acceptable shades of orange available to white girls, this is soooo uncomfy to look at how is no one around you pulling you for a chat about this https://t.co/SPLGQQ9dDs

Listen to Boyz by Jesy Nelson and Nicki Minaj to make your own mind up by watching the video here.

• ‘It took me a while to get angry’: What drag kings thought of Little Mix’s Confetti video