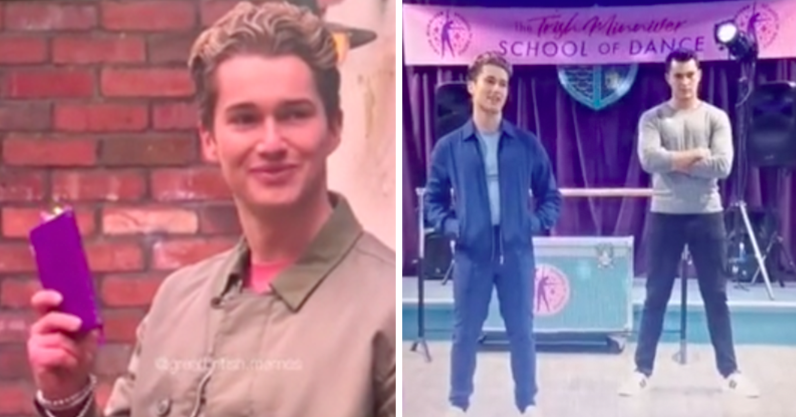 So you’ve seen the awful clip of Curtis and AJ Pritchard “acting” in Hollyoaks, obviously.

It was a crime against acting. For the uninitiated, the reality TV brothers were given a cameo storyline in the soap which involved them wanting to sabotage Trish’s dance school, with Curtis telling AJ to “prrrrrrobably stop whinging?”

I cannot stop watching this pic.twitter.com/hb4QVqYhL6

It’s spawned a thousand TikTokers trying to imitate it, and you can even buy a “How’s Trish?” t-shirt, but there’s more than just the one iconic moment.

Despite the pair making a swift exit from the show after their cameo ended, there was still enough time to film some horrendous scenes. We even get to see them go face-to-face with Denise Walsh.

Not only is it an insight into a wild storyline, but the way they alternate lines is truly terrifying.

Curtis, delivering the line with all the gravity of pre-Newton apples, purrs: “Ooooh she’s finished. How did you get it?”

Then AJ, inexplicably, spins around and says “I have my moves”.

It’s just too much, but somehow not enough.

“Just come to witness the fall from grace”, Curtis blurts out. Clearly, he’s been cast as the sinister enforcer to AJ’s Joker-like ringleader.

In fairness to Curtis, he gets somewhere close to menacing with the line: “So much so we’ve decided to take over the clientele and jump ship after our little…confessional”.

In a third scene – presumably the dramatic showdown to round off the storyline – Trish accuses them of “what is known by law as theft of company information”.

You know what? I’m actually quite invested. Give the pair their own soap.

• AJ and Curtis’s acting debut in Hollyoaks is cursed, and these reactions prove it

• Ranked: A considered analysis of the worst men in reality TV