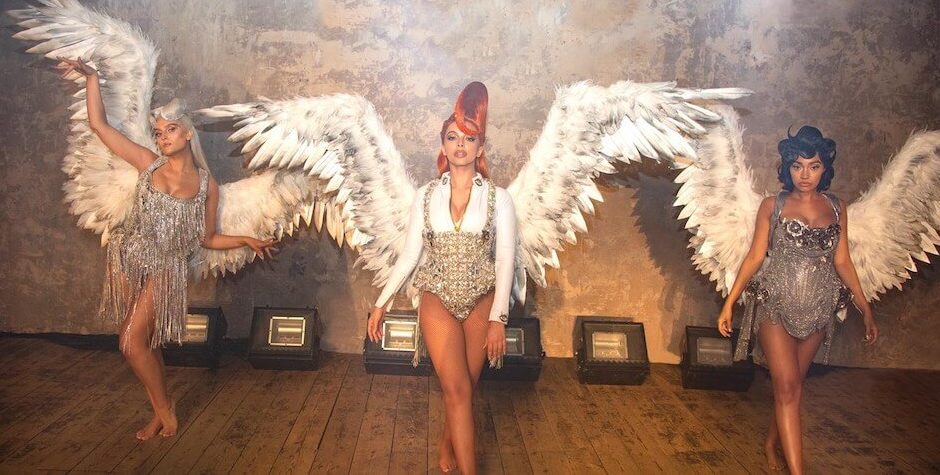 New Music Friday: Everything out today you have to listen to

We do not speak of Lana Del Rey’s single artworks

New Music Friday can be so overwhelming. Where to start? Where to stop? Not everyone’s got a spare hour to sift through their Spotify release radar to find their new favourite songs. With that in mind, we’ve been charitable enough to do it for you. Here’s a quick roundup of the 10 best new songs out this New Music Friday and the albums released that are definitely worth a spin:

When Lana Del Rey announced that her new album Blue Banisters would be coming out on July 4th, with the above image as the album cover, it wouldn’t be daft to have assumed she was joking. She only released her sixth album in March, and the self-made  artwork for Blue Banisters is… a choice, let’s just say that! But, she shuts you up as soon as she starts singing, and this is one of the most well written and sang tunes in her discography. Her vocals sound so powerful.

Listen if you love: Listening to the most gorgeous music to ever grace a human being’s ears

MARINA is back this New Music Friday with the title track from her upcoming fifth album Ancient Dreams in a Modern Land, and it’s (thankfully) great! She kicked off the era with the sublime Man’s World last year, and followed it up with the bloody dismal Purge The Poison; a racket with some of the worst songwriting in the game. But she’s back on track with this one, and the pop punk elements with her signature head voice work wonderfully.

This is officially Little Mix’s first new music as a trio, and it’s a really fun chart ready feature with David Guetta and Galantis that’s a bit of a paint by numbers bop but it’s a bop all the same. The girls sound amazing, but literally when do they not.

Listen if you love: Music that plays over Love Island montages

Georgia – Get Me Higher

Georgia was the last gig I went to before we were locked down in March 2020, and there’s now this kind of extra euphoric layer to her music that signifies clubs being open and partying with your mates. Her new single Get Me Higher is her most danceable yet, and is just an absolute BLAST.

Listen if you love: The 1975’s poppier stuff

Probably Nas’s most personal music moment yet. Much more raw instrumentation in the production, softer vocals and lyrical content that delves into his life before fame and coming to terms with his sexuality and not fitting in. And being a Nicki Minaj fan. It’s a nice different side to Lil Was X after the phenomenon of MONTERO (Call Me By Your Name), and is another exciting taste of his upcoming debut album.

Listen if you love: Khalid, but with actual personality

GET. ME. TO. A. CLUB. NOW. This is an absolute banger. Funky baseline meets house drums and a clapping instrumentation that needs vogueing choreography put to it immediately.

Listen if you love: Not being able to stop yourself dancing round your bedroom

Sharon Van Etten & Angel Olsen – Like I Used To

You know when you press play on something and you just know you’re going to listen to it all year? That’s how it feels with Like I Used To. It’s got a timeless charm that’s just stunningly beautiful. Feels like a huge American classic. Unreal.

It was getting to the point in Jack Antonoff’s career where he’s almost more well known for his work with Lana Del Rey, Taylor Swift, Lorde and St Vincent than he is with Bleachers. Well, he’s putting a stop to that with the EXCELLENT Stop Making This Hurt – a little blast of serotonin and carefree euphoria with lush vocals and an irresistible sax. Incredible.

Listen if you love: Feeling the emotion of happiness

How do you make the already incredible 2021 single Starstruck even better? You get Kylie bloody Minogue on it, obviously! Olly and Kylie sound absolutely electric together on this, and you can just tell he’s having the time of his life singing alongside such a legend in the field. Huge banger.

Listen if you love: Songs that would sound at home on Dua Lipa’s Future Nostalgia

Remember how Dynamite by BTS lived rent free in your head for the entirety of 2020? Well, in walks Butter. It’s your 2021 equivalent. So catchy it should be against the law.

Listen if you love: Manufactured pop music of the highest order

The biggest new pop star on the planet has shown up to New Music Friday with her debut album and it is outrageously brilliant. Pop rock and balladry in equal measure, her songwriting is just really setting her apart from any other new artist right now. Everything feels so self assured and confident – one of the albums of the year for sure.

Zara’s reissued her earlier 2021 album Poster Girl with a few new tracks, and if you never heard it the first time round, this is now the definitive version you need to listen to. The princess of scandipop brings it constantly on this record – it’s absolutely stellar and if you didn’t watch her live YouTube concert, go and watch it IMMEDIATELY.

• Every Cheryl single ranked from great to greatest