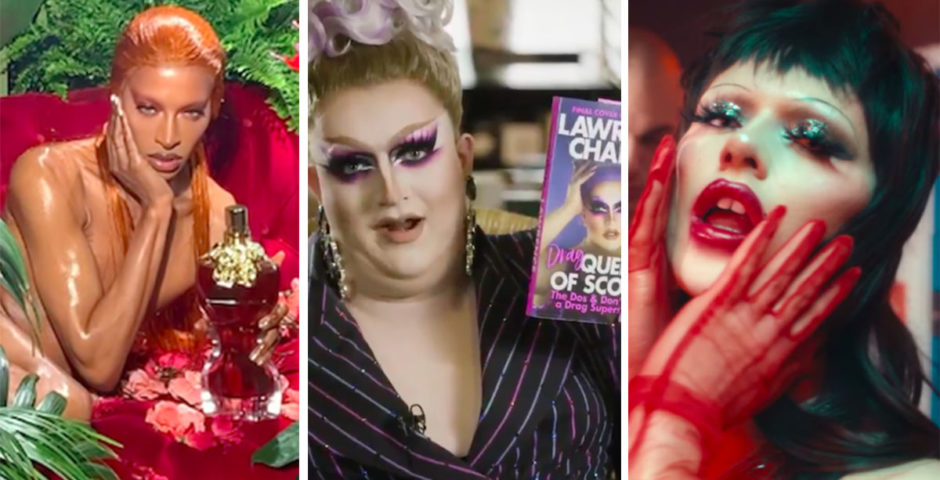 Singles, Netflix and Little Mix: Everything the queens have been up to since Drag Race UK

Bimini has been on nearly every magazine cover going

It’s been over two months since the Drag Race UK finale and I’m still having withdrawal symptoms. Luckily the queens have not been quiet since Lawrence Chaney was crowned the winner of season two.

All over Twitter and Instagram they’ve been celebrating each other’s success and shouting about the new projects they’re all working on and I just love to see it.

Since the show ended the queens have been busy getting book deals, tours and releasing singles. A’Whora is performing at over 200 events, Bimini is now a model and Tayce is doing sponsored content for Heinz Baked Beans.

All the queens will be coming together again next year when they all take part in the Drag Race UK tour. The tour was originally meant to just be the four finalists, however after backlash from fans all the queens have now been added to the tour.

This is everything the season two queens of Drag Race UK have been up to since the show ended:

Our wonderful winner Lawrence Chaney made a big announcement in May – they’re writing their own book. Lawrence’s book will be called “Drag Queen of Scots” and is set to be released at the end of September this year.

Lawrence has appeared on an episode of Celebrity Juice and joined The Vivienne in their Netflix show.They’ve also got loads of events lined up including Klub Kids.

Is there anything Bimini hasn’t been up to since the show ended? Firstly they made the very excitement announcement they would be releasing a book later this year titled “A Drag Queen’s Guide to Life”.

If a book deal wasn’t enough Bimini has also announced they have been signed by Next Models as part of the main booking list.

Bimini was honoured with a mural in their hometown of Norwich starring their first look of the series – the Norwich football team outfit. Sadly the mural has been painted over in an act of vandalism.

And they haven’t stopped working. Bimini has been on the cover of Evening Standard magazine, Notion magazine and Time Out magazine.

They’ve starred in Little Mix’s video, hung out with Sadiq Khan, starred in a campaign for Selfridges and if that wasn’t all they’ve also just released a single called “God Save The Queen.” Phew, I’m exhausted just reading that. How does Bimini do it all?

Everyone’s favourite, Tayce, has been smashing it since the end of the show. They’ve appeared in ad campaigns for Coca Cola, Jean Paul Gaultier, Bluebella lingerie and the most iconic, Heinz Beans.

She’s starred in Little Mix’s Confetti video alongside Bimini and A’Whora. Tayce has also been busy performing as well, including at the Drive Time Drag show.

Fourth finalist Ellie Diamond has mainly been busy performing on tour since Drag Race ended. She’ll also be on the official tour next year.

Wow A’Whora has been busy booking up a LOT of events since the finale of Drag Race. Like the rest of the queens she’ll be joining the finalists on the UK tour next year.

But before that she’ll be performing with the UK Huns on their tour this year which will not only be in the UK but also in Canada and Australia. A’Whora will also be performing at Holy T in The Park, Manchester and London Pride, Mighty Hoopla and Drag Fest.

A’Whora has been signed to modelling agency Elite both as A’Whora and George. She’s worked with makeup brand Lottie London, starred in Little Mix’s music video, appeared in Bluebella’s campagin and featured on the cover of Gay Times magazine.

Sister Sister will be joining the rest of the queens on next year’s tour but apart from that she hasn’t been up to much.

Although she does have more merchandise available including a hoodie and pillow with her iconic blue lips look.

Tia has really stepped up her looks since she left Drag Race, like wow.

Tia will be performing at Holy T in the Park and has recently performed in the West End alongside Veronica Green and the Vivienne for a one off performance.

She also joined The Vivienne in her Netflix show to discuss Eurovision. Her most recent exciting announcement is Tia will be joining Virgin’s LGTBQ+ radio station as a presenter for the next few months whilst the station is live.

Tia has also done some sponsored posts for Alpro.

Easily the most iconic thing that’s happened to Joe Black since leaving the show, is the news that she’s auctioning off *that* H&M dress for charity.

Joe announced on her Twitter people could enter a raffle to win the dress in order to raise money for Sussex Beacon which is a charity helping people with HIV in the Sussex area.

Joe has also announced her own tour for September and will be joining Tia Kofi and the UK Huns at Holy T in The Park.

The biggest news for Veronica Green was the announcement that she’s releasing her debut single called Stars, which has been written and produced by Strictly Come Dancing’s music producer. She even performed the single alongside Myleene Klass.

Veronica also joined Tia and The Vivienne for a show on the 17th May. Oh and she’s signed up for Cameo too if you want a personalised message.

Ginny Lemon has been pretty busy since the end of Drag Race UK. They’re appearing alongside Bimini in a number of special shows dedicated to talks about gender and raising money for charity.

But most importantly the Birmingham Bullring has had a Ginny Lemon inspired makeover. Complete with yellow Crocs.

Shortly after the Drag Race finale Asttina made the very sad announcement that her mother had passed away.

Writing on Instagram she said was “broken beyond belief” and celebrated her mother Dawn Elizabeth Seaton for being the “strongest most powerful woman ever to walk this earth”.

She wrote: “Dawn Elizabeth Seaton – Born 1st Oct 1964 was the strongest most powerful woman ever to walk this earth, battling and fighting breast cancer, and fighting every second against her illness and I know and so happy that she is no longer in pain and she is at peace, up above among the stars and heavens.

“THANK YOU MUM, THANK YOU BEING YOU, THANK YOU FOR THE LIFE YOU GAVE ME AND THE 28 YEARS WE SHARED TOGETHER.”

Asttina thanked everyone for their support and has been keeping a low profile since she shared the sad news.

During the last few months Cherry has been continuing to work as a nurse but recently released her debut single called “Aesthetic”.

Cherry will also be appearing on the UK Drag Race tour and speaking on a panel at Manchester Pride later this year.

•Alright babes? It’s time to find out which Drag Race UK season two queen you are

•If you miss the Drag Race UK queens already, here’s what they’re up to on TikTok

•Still not over last night’s Drag Race episode? Recover with these 33 finale memes