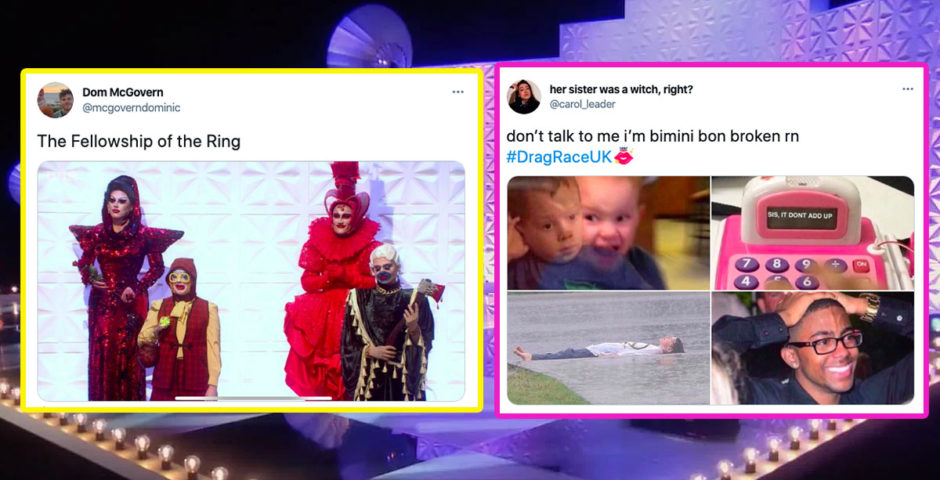 Still not over last night’s Drag Race episode? Recover with these 33 finale memes

‘A Bimini Bon burglary has occurred’

In all seriousness the Drag Race UK final had everything – tears, insane outfits and the lip sync battle to end all lip syncs. The episode ended in Lawrence Chaney being crowned the winner of season two, and the first ever Scottish winner of the franchise.

As with every Drag Race episode Twitter was full of funny reaction tweets and memes. The resounding feeling was everyone was very happy for Lawrence but also devastated for Bimini Bon Boulash. There was also a lot of love for the return of Ginny Lemon’s facial expressions as well as everyone being incredibly disappointed the show is over and questioning what the hell we’re going to do now?

So whilst we wait for season three, at least we have these 33 reaction memes to last night’s Drag Race final:

2. Not here for trauma

Ru: GIVE ME YOUR TRAUMA

Tayce: MY DAD WAS IN WHAM. HE WAS VERY SUPPORTIVE

3. Honestly how did she not drop this in sooner?

i can’t believe tayce was holding in “my dad was the bassist for wham” the entire season like we didn’t get a werk room moment for this ?????? what

5. I will do literally anything

The BBC editors trying to sync up the queen’s verses in ‘Everybody Say Love’ #DragRaceUK pic.twitter.com/Zb8SCfKmgH

18 mins later and still recovering from @its_tayce having the nerve, the audacity, the gaul and the gumption to slay a little bit of love like that pic.twitter.com/XpDDYcHzRc

8. Don’t think I’ll ever be over this photo

The Fellowship of the Ring pic.twitter.com/ktJhEXJmmG

When you're 6 years old and your mum has been chatting to someone you don't know for over 10 mins at the supermarket #DragRaceUK pic.twitter.com/40eXLYjt4n

Asstina looking like an elegant, housewife dropping her child off on World Book Day truly the highlight of this episode #DragRaceUKFinale #dragraceuk pic.twitter.com/efzuCwLTK4

And the winner is… pic.twitter.com/zHvp6b086M

the English, Welsh and Scottish governments individually trying to stop the spread of Coronavirus #DragRaceUk pic.twitter.com/iCQANWrZs0

15. Just give her the Beyoncé ffs

thinking about the fact Tayce didn’t get one contemporary uptempo bop to lipsync to all season. Here she is killing it to Ru’s vinyl collection when the poor lass just wants some Beyoncé. pic.twitter.com/w20pUNWgUn

18. Legend is an understatement

she’s an icon, she’s a legend and she IS the moment #DragRaceUK pic.twitter.com/rjBBvEAREC

This is Bimini Bon Bullshit #DragRaceUK

21. But also we love Lawrence

23. They were the winner, don’t know what you’re talking about

gonna tell my kids this was the winner of drag race uk season 2 #DragRaceUK pic.twitter.com/UO3W48zI6U

25. Is the wedding cancelled?

bimini came back from quarantine and won four out of five challenges and they still didn’t crown her… #DragRaceUK pic.twitter.com/BF8AYfisrb

How ironic that the government are bringing in all these rules about protesting just went Bimini got bimin bon burgled … #DragRaceUK pic.twitter.com/5KiLUBwYxd

29. The nerve of some people

people on my TL having the audacity to tweet about football at a time like this pic.twitter.com/YHVJHa1fDG

A season that gave us

Sorry but what are actually going to do with our lives now #DragRaceUK is over pic.twitter.com/lhSZnSWHeU