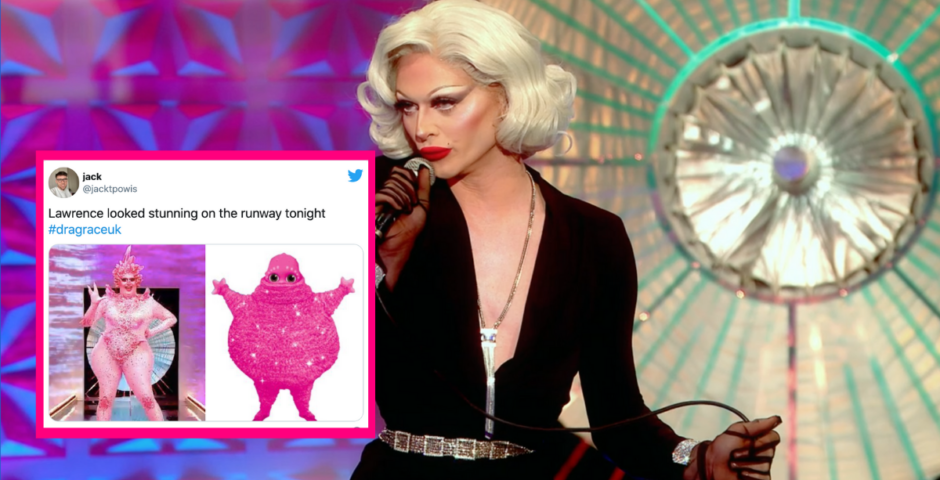 These 23 Drag Race UK tweets are the best thing you’ll read today, not a joke just a fact

Last night saw the top five of Drag Race UK battle it out to get into the semi-final of the competition, and battle truly is the only word to describe what went down. It was a battle of the bitches. In short: Lawrence, A’Whora and Ellie had the biggest row over performance ordering in history whilst Tayce and Bimini watched from the sidelines.

Quite frankly, the amount of drama that went down in this episode was more than the rest of the entire season put together – seriously, it was worse than Ru’s H&M meltdown.

So if you’re looking for an outlet to channel all your rage after last night’s episode, read these 23 tweets.

1. A ready-made drinking game for when you come to rewatch this episode

Take a shot each time the word BADGE is said in this episode of #rupauldragraceuk I promise you will be lit in the 1st 10 minutes! #rpdruk #RuPaulsDragRace #RPDR #DragRaceUK #DragRace pic.twitter.com/UX3xz1R0Yj

2. Lawrence and A’Whora’s anger in the whole episode was on another level

3. We’re actually not sure people will recover from how angry Lawrence was

All Ellie did was play the game like it should be played, not sure why Lawrence and A'Whora acted like she'd just committed a war crime or something #DragRaceUK pic.twitter.com/en2QBsJA9r

4. Tayce and Bimini just sat back and took in the tea

#DragRaceUK Lmao A'Whora and Lawrence are loosing their shit at Ellie whilst Tayce and Bimini just watch on like pic.twitter.com/rNVd266drL

5. No one sums it up better than the GC

6. Tayce once again proving she is the most naturally funny queen

When you're trying to flirt, but you haven't had lunch yet #DragRaceUK pic.twitter.com/CUAklkDYVY

I mean…. it wasn’t even.. that bad? Grow up BBC. #dragraceuk pic.twitter.com/lbdXObohwt

8. God save Queen Bimini for actually giving us the comic relief we came for

9. Well done Bimini, we love you

10. The nation has collectively decided it will dismantle the patriarchy for Bimini

Not a joke, just a fact

11. The contrast between Ellie’s Dirty Diamond and Tayce’s love of beans

12. Twitter is absolutely raging because Tayce was actually funny??

13. Lawrence Chaney came out on the runway dressed as a Boobah

14. Oh wait, no, Lawrence decided to come as an extinction-level event

Ru: as a prize you get to pick the lineup

16. RuPaul really did have the nerve, the audacity, the gall and the gumption

In honour of @dragraceukbbc Day may I present my ode to @biminibabes– UK Hun, but as a dramatic monologue in the style of the Royal Shakespeare Company pic.twitter.com/kFKkRV4S1P

18. Even though shit was getting heavy on the main stage, this height difference actually had us giggling

19. Let’s face it, tears were shed hearing RuPaul tell A’Whora to ‘Sashay Away’

20. Should we just give Bimini the crown now?

21. Petition to RuPaul: WHERE IS THE DOUBLE SAVE WE ALL NEEDED?

so rupaul can wait like 5 episodes to eliminate anyone in american drag race but can’t do a double save with awhora and tayce when neither deserved to go home???? #DragRaceUK pic.twitter.com/wF6sZBnM6e

22. If there’s ever been a time for a double save in Drag Race UK HERstory, that was it

23. And finally, a tweet capturing how we all felt coming away from last night’s episode

This was my literal face watching the last episode of #rpdruk pic.twitter.com/fqF2Rt0lJX

• Drag Race UK: What did A’Whora say in her bleeped-out stand-up routine?

• Hey squirrel friends! It’s time to find our which Drag Race season 13 queen you are

• What did A’Whora say in her bleeped out comedy routine?

• Alright babes? Time to find out which Drag Race season 2 queen you are

• ‘There might be a UK Hun? Ep’: Tayce and A’Whora on their experience doing Drag Race UK