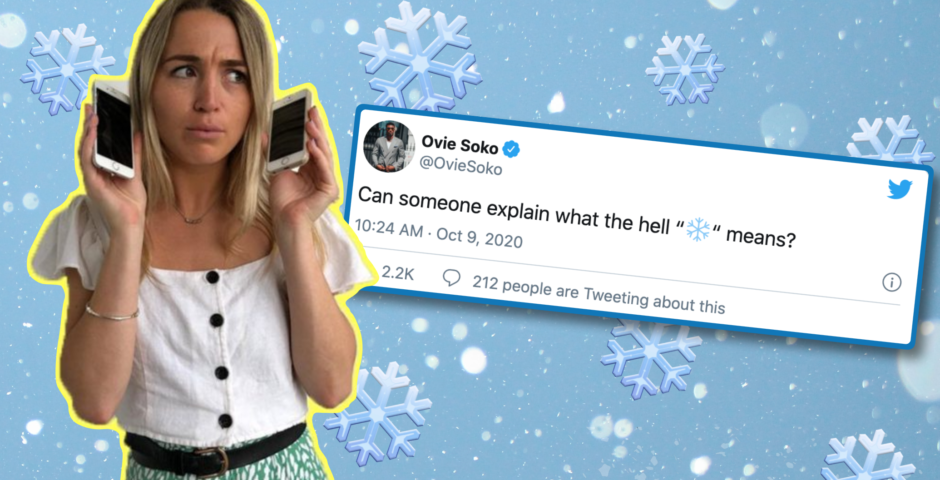 Right, why is the snowflake ❄️ emoji all over Twitter right now?

Another day, another search term that has to be blocked on Twitter before it makes you go absolutely INSANE. For the last week, it’s been the infinitely hateable “how it started / how it’s going” trend, but now that seems to be mostly wrapped up, the next annoying and repetitive phrase has already come rudely barging through the door. We are, of course, talking about the snowflake ❄️ emoji, that you simply cannot escape from on any form of social media right now.

Can someone explain what the hell “❄️“ means?

What does the snowflake ❄️ emoji mean?

Now we’ve asserted how annoying this trend is, you’ll be just as irritated to learn that the story behind it is just as simple and nonsensical. Essentially, it goes a little like this. Quavo, rapper and part of Migos, started out by taking part in the aforementioned “how it started / how it’s going” trend.

This involved him sharing the first DMs that were shared between him and his beau “Saweetie” (me neither). In these DMs, he opens by sending her a snowflake ❄️ emoji.

HOW I PULLED UP: HOW WE COMING 😂 pic.twitter.com/hIYyicrfIj

And that is genuinely it.

Really, I’d love more than anything to tell you that there was more to the story than this – I really would, but alas, that’s just the way it goes sometimes. So, if you’re thinking of sliding into that one person’s DMs in the coming days, just know that simply sending a random emoji will suffice (if you’re super-rich and famous, that is).

There’s been a couple of tweets mocking this trend which, still, will coax no more than a small exhale through your nose, so it’s no use even showing you them. Life = complete.

• What the emojis you have in your bio say about you

• I took a month off social media: Here’s what I learnt