NHS coronavirus tests are only available at four of the 24 Russell Group universities right now, a Tab investigation has found.

When The Tab tried to book tests on the gov.uk website using postcodes for each uni, we were told the service was “too busy” for the remaining 20. In other words, NHS tests aren’t available at 83 per cent of the country’s top unis.

Instead, we were told to try again later.

SAGE, the government’s group of scientific advisors, says the influx of students to uni towns this month “could amplify local and national transmission”.

Whilst some unis, including Exeter and Nottingham, are ordering private tests for students, there are still concerns this won’t be enough to deal with the return of students.

“In addition to the steps being taken by our universities to reduce transmission on campus and in the wider community, we would urge the Government to ensure that sufficient local testing capacity is in place,” a Russell Group spokesperson told the Evening Standard.

These results show just how difficult it is to get tested if you’ve got symptoms. Tests were only available at Cambridge, Warwick, Newcastle, and UCL.

For three unis where you could get a test, we were told the nearest drive through centre was in Hartismere, Suffolk. This is around 80 miles from UCL, the closest of the three, 130 miles from Warwick and 280 miles from Newcastle.

How we did it

Between 8-11am today, we tried to book a test using a postcode corresponding to each of the Russell Group’s 24 universities. We said we had symptoms, had a car (so we could use drive through services) and that the symptoms started on the 13th. The gov.uk website says that on the fifth day of symptoms, home tests are not available. The reason for these choices was to reduce the chance of being considered “low priority”, and so maximise the chance of being shown the available options.

To be clear, we did not actually book tests and take up capacity, as it’s possible to see if tests are available for a specific postcode without confirming a booking. Once we entered the details and filled out the forms, one of two screens appears.

Either saying the service is busy, and to try again later: 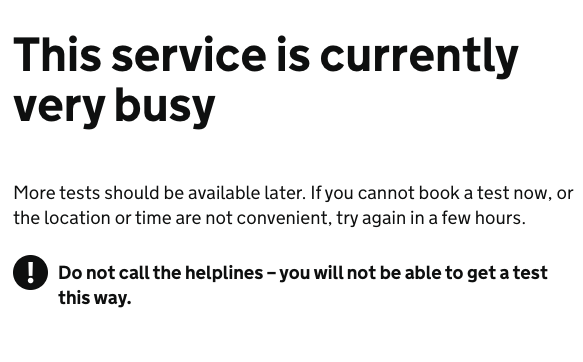 Or, in the case of UCL, this screen presenting us with the available options: 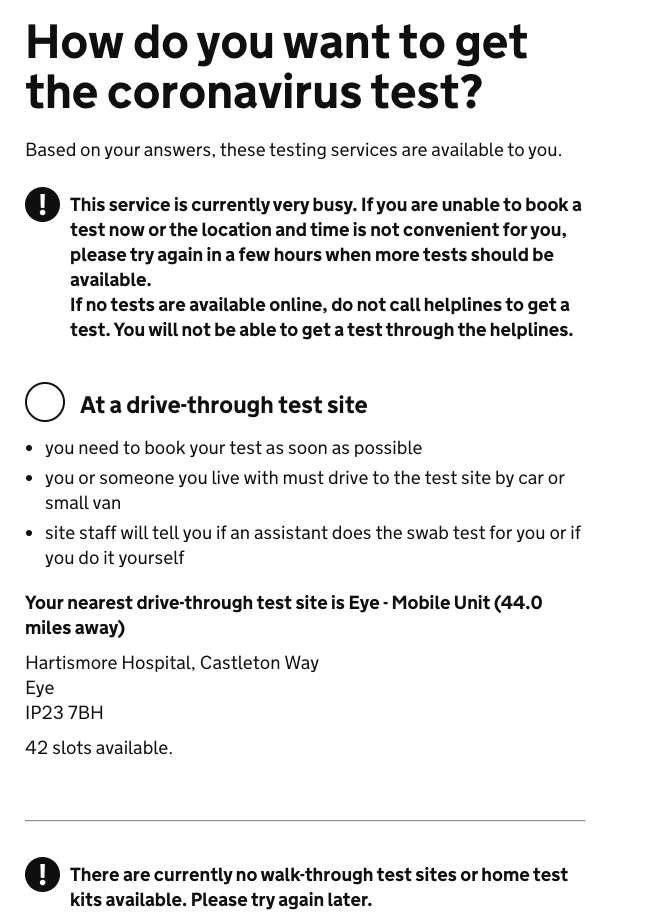 After an LBC investigation yesterday found COVID tests were only available at two of the country’s 48 hotspots, Matt Hancock said the government would look at making sure only those who needed tests would get them. “We’ve seen a sharp rise in people coming forward for a test, including those who are not eligible. And throughout this pandemic we have prioritised testing according to need,” said Hancock.

“We’ll set out in full an updated prioritisation and I do not rule out further steps to make sure out tests are used according to those priorities.”