They’ve become the poster boys of dumb racist opinions, but that’s not them

You’ve probably seen this meme doing the rounds. With their tattoos, tight shirts, and lack of obvious socks, the lads in the picture have become a visual representation of *that* kind of British opinion.

The caption might have been a rant against the Churchill statue being graffitied, loving Peaky Blinders, or thinking that rioting is a bit too far. In any case, you’ve probably seen it floating around social media.

Obviously, though, this is a picture of real people. Four lads from Birmingham and Coventry, to be precise. We tracked down and spoke to those lads – who say they don’t want to be the face of bad opinions anymore.

First, for the actual context behind the picture, which was taken at the start of a night out in Birmingham last July. The group got this picture taken of them outside New Street Station at the start of the night, then went out to Slug & Lettuce and Olivia’s.

The boys are Connor Humpage, Kevin Rooney, and Jamie Phillips. The friend in the middle didn’t want to be identified as he’s been the target of the more personal abuse. Three of them work in manufacturing, and Connor is a tattoo artist.

Contrary to one of the memes, they weren’t drinking WKD on their big night out, instead going for vodka, Jack Daniels, and lager. Although they did have three bottles of Grey Goose on their table at Olivia’s. “I know that’s quite stereotypical”, says Kevin.

After the night out, Connor posted it on Instagram with the caption “Tight trousers chose us”.

From there, it was picked up by a viral Facebook page and a meme of the boys got around 500k likes

Kevin had people from Brazil and America messaging him constantly. “Every day I was getting tagged in something. It is funny,” he said.

“Some of the comments are brutal. It doesn’t affect any of us, luckily, but comments like ‘they all need to hang themselves’? It’s not that deep.”

The lads were mystified as to why an innocuous picture of them had gone viral in the first place. “I still can’t get my head around why,” says Connor. “It’s just a normal picture with my mates.”

Whilst their tight clothes have been mocked, all say they work hard at the gym and just wore normal clothes. “If we were wearing flares or bootcuts we’d get the piss taken out of us,” says Connor.

At that point, even with a few quite savage Facebook comments, they all found it quite funny.

Then, almost a year after it was originally taken, the picture resurfaced, often with jokes about bad Black Lives Matter takes. “In the last six weeks it’s come around again but times 10,” says Jamie, who reckons he gets 20 to 30 messages about it every day. “It’s just been quite overwhelming for me to be honest with you.”

What’s worse is that they don’t see themselves reflected in the memes. Even the less political ones.

Then there’s this one, captioned: “Yeah he might have been a bit racist, but defacing a Winston Churchill statue is just too far mate”.

Jamie says he doesn’t know enough to have an opinion. Kevin backs bringing down Colston statue – “I’m all for the statues being taken down of the slavers and colonisers” – but draws the line at Churchill.

“Although Churchill he had racist views, back then a lot did, but he also fought against Hitler, who was probably the biggest racist on the planet,” he says.

However, it’s this George Floyd meme that has caused them the most hassle. 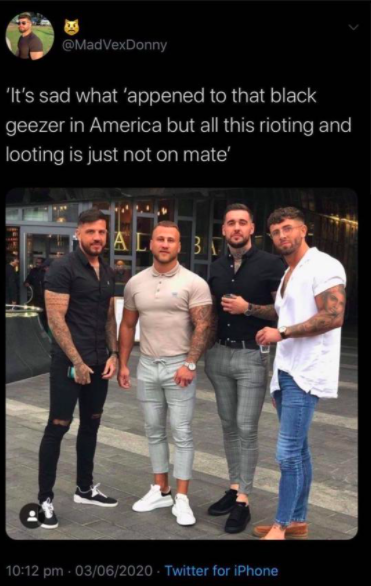 “It’s just not on. The last thing you want your face associated with is racism,” says Jamie. All the boys mention how this picture led to a flood of messages, even from people they had met fleetingly on holidays, asking if they’d seen the pictures. They spent a while messaging people who’d posted it, asking for it to be taken down.

Things got so bad for Connor he had to put a lengthy post up on Instagram distancing himself from the meme, saying “TO CLARIFY, THIS MEME IS BY NO MEANS OUR VIEWS.”

In fact, as a tattoo artist, Connor has been working on a drawing of George Floyd.

Think this speaks for itself! My most powerful drawing to date. My tribute to George Floyd👊🏻👊🏼👊🏽👊🏾👊🏿please share 🙏🏽 #BLM #ripgeorgefloyd

Seeing the picture get used to make a point so different to what he thinks was the final straw for Connor. “It’s stereotyping normal lads for being racist and simple, which couldn’t be any further from the truth,” he says. “It’s just stereotyping dumb things said by white lads”.

Of course, when any meme goes big, there’s always a real person behind it. When it’s Bad Luck Brian, the distracted boyfriend, or Alex from Target, the memes are usually fairly benign. But it’s clear this has had a way bigger impact on the boys’ lives than you’d think. Jamie thinks it speaks to a wider trend.

“They’re trying to portray us as being stupid individuals,” says Jamie. “They’re just trying to make us sound thick. It’s a lot to do with Love Island, in my opinion. People come across as quite stupid when they’re on there, and we have that kind of look.”

He points out that three of them work in manufacturing: “We laugh because we’ve all got reasonably well paid jobs. It’s quite ironic that we’re being perceived to be very stupid.”

For Connor, the whole thing has led to an upsurge in business inquiries. People messaging him to flag up the photo have ended up asking about getting a tattoo.

“If you’re taking the piss out of our clothes, crack the fuck on,” says Jamie. “I think people aren’t naive enough to think we’re racist.”