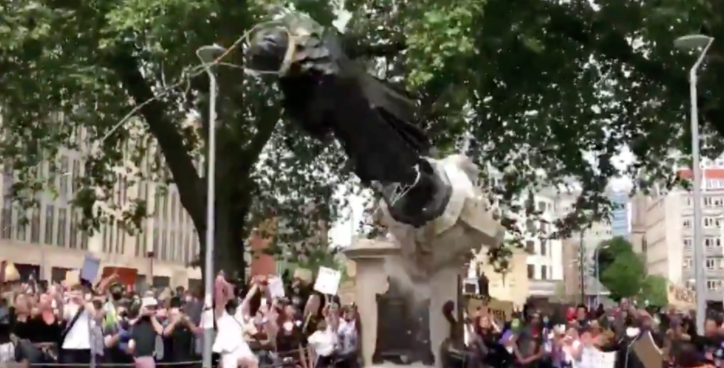 Exclusive: We spoke to the man who pulled down the Colston statue in Bristol

‘Everyone chanted for him to come down, so I opened my bag and threw the rope up to someone on top of the statue’

If you haven’t seen the video of Edward Colston’s statue being pulled down in Bristol on social media, you’ve seen it on the front pages of every newspaper today. BLM protesters came together yesterday to tear down a memorial of a prolific slave-trader, and in an act of true heroism, threw him into the harbour whilst protesters cheered on. If you’ve watched it, it’s likely you wished you had been there to witness it, to see so many people come together to dismantle a part of Bristol’s racist history.

But imagine being the person who brought the rope and pulled it down. The Tab exclusively spoke to Mike and Sam – not their real names, for obvious reasons – about what it was like to be involved as a new part of a city’s history was forged.

Absolute scenes today!!!!! Big up bristol, the statue of Edward Colston just got taken down in the BLM protest!!! #BlackLivesMatter pic.twitter.com/6yvyXm2dtJ

When Mike arrived at the protest, people were throwing eggs at the statue and chanting “Colston must fall” and “bring him down”. A black blanket that been thrown over Colston and people were debating whether to remove it.

Having seen people on social media begging for the statue to come down, “I knew someone had to bring rope, and I had some.

“Everyone chanted for him to come down, so I opened my bag and threw it up to someone on top of the statue,” he told The Tab.

“People on the statue spent a few minutes making sure the rope was safely secured. Meanwhile I shouted for people to stand back and clear out the way in preparation for the falling of the statue. I wanted to make sure it was safe first. ”

As he did that, people kept chanting and holding onto the rope to pull. “The general vibe was supportive but people didn’t think it could fall. Then it swayed a bit once and everyone started cheering like mad. Then it just fully toppled over and everybody cheered! I think I was the first to jump on him.

“With the right leverage – a rope around the head being pulled from low down – and when you have so many people pulling it…it came down really easily.”

After the statue came down, the Daily Mail ran a front page calling the protestors “LAWLESS & RECKLESS”.

These demonstrations have been subverted by thuggery.

The backlash has shocked Mike. “I stand for what happened for sure. I couldn’t believe it hadn’t come down before when people have asked for 25 years for it to fall.

He thinks there’s an injustice that black people in the city have “had to walk past with his figure looming over, a concrete image haunting them of how racism is still rife in our country and it’s history.

“I just can’t believe some people think it was a ‘violent and thuggish’ act when it was safely thought out and carried out. Since the statue represents something so horrible, something which the entire world is trying to completely stamp out, no I don’t think it should be seen as criminal damage.”

Police are treating it as criminal damage, however didn’t intervene in the toppling. Although he doesn’t believe it should be treated as criminal damage given the context, Mike says “I’m almost expecting to get prosecuted for it.”

He thinks the police handled the situation well: “The police showed an example to the world what proper policing is: not stopping a breach of the law when the context and society itself justifies it.”

The moment a statue of slave trader Edward Colston toppled into Bristol’s harbour. ‘It’s what he deserves. I’ve been waiting all my life for this moment’ someone told me in the moments after. pic.twitter.com/6juqVrsJ6V

Sam*, a student at Bristol Uni, joined in when the statue was being rolled down to the harbour. “I had no idea where people were taking it. I was just there to help move it,” he said.

“It was adrenaline-fuelled. Everyone was so proud and so happy. The whole thing had to happen.”

For Sam, the removal of the statue was personal: “The statue has been a large source of discomfort to me during three years at Bristol uni.”

“No black person should have to walk by it everyday and be reminded of it everyday.

If taken out of the harbour, the statue should be put into a museum, says Sam. If it were put back up, it’d be “a slap in the face and devalue everything we did yesterday.”

The (dumb) argument that taking statues down from public display erases history doesn’t wash with Sam. “Yesterday was history in and of itself,” he says.

With protests across the country and the Atlantic, “it was the whole world pulling it down

“This had to happen for people to really realise they have the power in their hands to properly change things.

Like Mike, he thinks the police did a good job yesterday. “It seemed like the police were more than happy to have it pulled down. They were brilliant – listening to people’s words.

“One policewoman even said ‘it’s a bit too heavy for us to defend’.”

• ‘We are here to fight for black lives’: Thousands gather for Bristol Black Lives Matter protest