Let’s just say it was an enlightening experience

I have been practicing social distancing for almost a week now. I’m going slightly insane in this quarantine lifestyle, exhausting all of my apps and then calling my parents every day just for a slither of human interaction.

Social media’s advice to this scary period is to treat it as a period of self growth. A Kitty O’Meara quote that has been doing the rounds on Instagram like it’s the holy grail says: “And the people stayed home. And read books, and listened and rested, and exercised, and made art, and played games, and learned new ways of being, and were still.” And surely what Kitty O’Meara meant by that is: Call all your exes and ask them where it went wrong.

“And the people stayed home. And read books, and listened, and rested, and exercised, and made art, and played games, and learned new ways of being, and were still. And listened more deeply. Some meditated, some prayed, some danced. Some met their shadows. ..Contd in comments..

Who better to ask about my self improvement, I thought, than my exes. The people who have experienced the worst of me are definitely the most qualified to tell me what went wrong and how to improve. It’s worth a try to see how I can be the best me I can be. Plus, I really don’t have anything better to do.

After scraping around for their phone numbers, I decided to give them a call, after obviously prepping them that I would be calling, I didn’t want to cause any upset (aka have their current girlfriends pick up instead of them).

Jay lived opposite me in our uni accommodation, and we met in the second term of first year. I vaguely knew of him because he was one of the few smokers in our college. I was really drunk in our SU club, recognised him and pretended I thought I knew him so that I had someone to go to the smoking area with. Being the only smoker in your friendship group is really hard. We went on one official date in our whole relationship: To Spoons and then to a park, student budget style.

I honestly didn’t think Jay would pick up. We lived peacefully opposite each other after the break up, and by peacefully I mean, we just didn’t acknowledge each other. Jay had come back to uni a week early to surprise me, but I had already decided and told my housemates that I was going to call it off. We had a BBQ and went to bed, I was asleep by 11, and the next morning as soon as I woke up, I couldn’t hold it in. I just broke up with him, like, five seconds after he opened his eyes. I think he thought I was joking at first, “Morning, I don’t want to be with you anymore” ha ha, good one! But alike to a tube of Pringles, once I started, I couldn’t stop.

After many questions, and my lack of answers, Jay eventually went back over the road to his own house. I don’t recall ever talking again. He accidentally called me once in the library but he said it was because his phone was broken. Okay.

Boredom is a powerful feeling. Jay answered and said he would be “happy to help” before admitting he didn’t know who he was on the phone to because he didn’t have my number saved. Lovely, in the net, you can’t get out of this one. 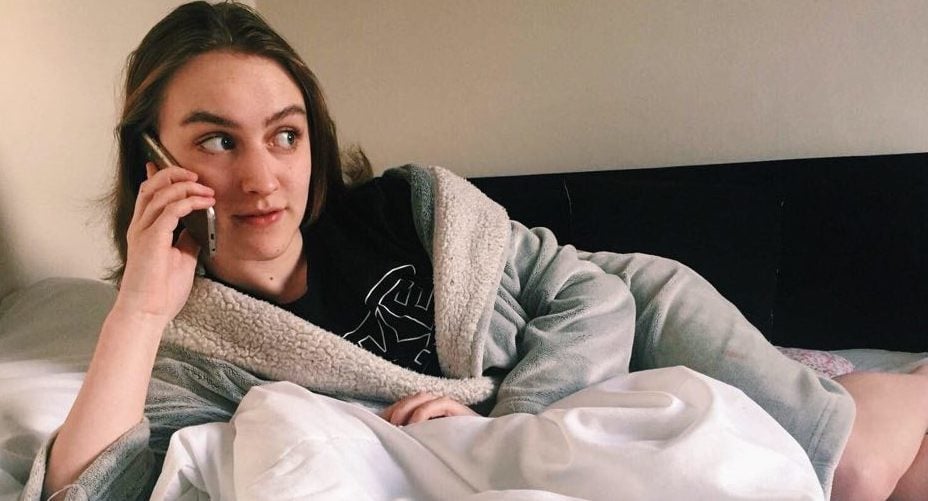 I asked Jay why he thought things went south between us, he said: “Alright, sweet, I think initially everything was really great because we were both available, living super close, and the thrill of it all was the sorta uni vibe you would want really. And it was super easy to get close because we were both nice and kind to one another, so everything felt like it was great.

“After thinking it through for a while, after April, I guessed you probably thought that yes I’m nice and I look after you, but that you aren’t getting the most out of someone you should be fully committed to. I don’t believe you made any wrong conscious choices, and neither did I. I think we were both too eager to jump into a relationship just because we both wanted to, I think what I – and I’m sure you have reflected upon, is deciding what makes a person someone really genuinely someone you want to be committed to, rather than if it seems good at the time.” Deep.

When I broke up with him, I went down the route of saying it was time for me to be an independent woman, to live freely without commitment. He told me that if I got into a relationship within the six months after breaking up with him, he would know I was lying. We broke up in April, I started dating another guy in July. Oop. Sorry Jay, I’ll take your advice this time.

Tim, together for multiple months, about three years ago

Tim and I were friends before we started dating, shortly after he left a very long-term relationship with a girl I didn’t seem to get on with. She threatened to punch me in the face but never did. Tim and I shared a common interest in photography and Tyler the Creator. I really wish I could say we had more common interests, but I don’t think we did.

When I broke up with him, I took him to my favourite smoothie bar. He was very difficult to break up with, by which I mean, whatever reason I gave, he would have a more than adequate counter-argument which definitely got frustrating. I told him I didn’t want to be with him anymore, and he would say I didn’t say that the day before. I told him I was in love with somebody else, he’d ask who, I would say he didn’t know them, he’d say I was lying, caught out, I’d say I was confused about my sexuality and he would say that’s fine, that we could work it out together. I remember thinking “oh my god, please just let me break up with you.” Sorry, Tim. 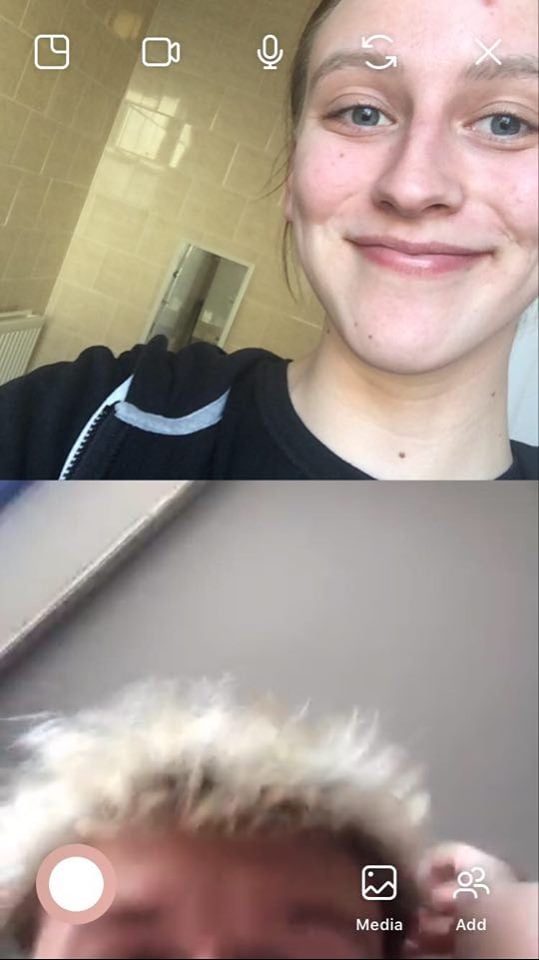 Tim did not want to be included in the photo

When I messaged Tim to get his number, I thought it would be a long shot. I was fully expecting to be aired or told to fuck off. I ended things out of the blue, with no explanation really, and slide into his dm’s asking for feedback nearly four years later? Bold move.

Tim said: “There isn’t really that much, but I feel like you broke up with me really out of the blue especially after you brought me some gifts and shit the day before and then blocked me and wouldn’t speak to me about it” I supposedly bought Tim some photography books, fitting because he is now a photographer. I miss the times I had money.

“But I do wanna say and I feel this is a good time to say it, that I’m sorry for after it happened and I came to your house, lowkey still feel like a dick about it years later.” After Tim and I broke up, he came to my house within the following days with a photo album of some film he had developed whilst we were together, and some flowers. Underneath each photo was a description of the photo and how much it meant to him, huge softboi move. I definitely said thanks – I’m heartless, not ungrateful.

We decided there were no hard feelings, and we were both pretty young. Tim was nice enough to say that I was honest, and not a bad communicator but he advised that I could improve in my skilful ability of cutting people off: “It’s the cutting people off really. Like, for the longest time I assumed you just got bored of me.”

We ended the call with a friendly throw of the peace sign. Namaste.

Ed, my first ever boyfriend

Ed was my first ever boyfriend, we met in school. Ed was also my first kiss. We kissed, to my memory, outside of Greggs. Its exhilarating, the smell of the steak bake, I never had it down as an aphrodisiac. It was nice to end with calling Ed because we’re still friends now, despite me getting my best mate to dump him for me a few years ago. And he now has a boyfriend, so it was never going to work out anyway. A calm ending to this wild ride of phone calls and pseudo-therapy, I hoped.

After telling Ed my intentions behind the phone call, he moaned: “Oh, for fuck sake – are you taking the piss?” which wasn’t all nice, but it was fair, considering I haven’t spoke to him in at least four months.

Ed then goes on to ask “How long was our relationship? Three days?!” That hurt, it was definitely over a week, maybe even two. I’m unsure of his intentions here. 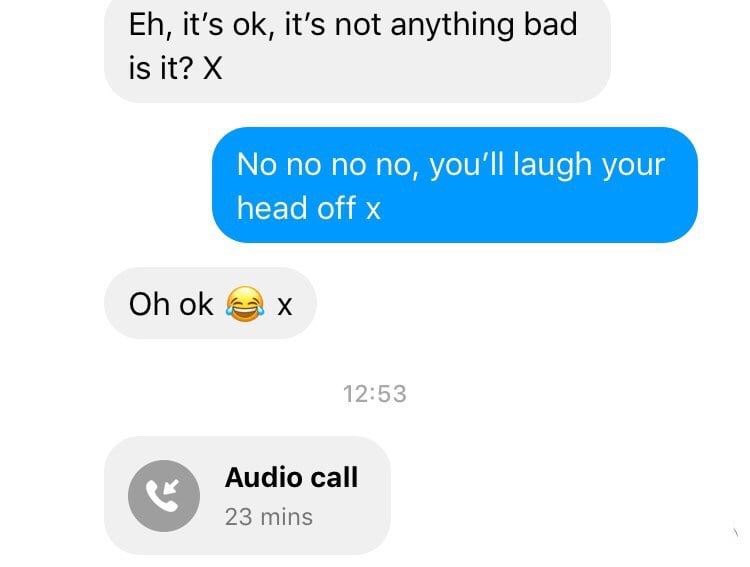 He continues: “Not much happened, and after a while you got your scary friend to dump me. In terms of improvement, maybe you could have the bollocks to dump me yourself.” I like to think that I have improved since this break up, it was the first time I had ever had to break up with someone, and my mate was ballsy enough to do it.

Ed then goes on to give me “three points of improvement” which did not come as a surprise given that he is a politics boy, and introducing such a policy is very on brand. “One, confidence. Two, you could have been a bit more passionate, a bit more affectionate. And three, you just could have shown a lot more enthusiasm for the general experience of it all.” Hard to hear my character attacked but also, I did ask for this. And I got what I wanted.

After putting the phone down from Ed, I felt optimistic, a lesson learnt. Ariana’s “Thank u, next” played as I swiftly went downstairs to tell my friends of my endeavours, with hope for my own personal growth during this quarantine fully restored.

If you’re bored, call up your exes. They’re probably as bored as you, and might want to spend some time giving you feedback for this crucial period of self-learning. And in a seemingly never-ending quarantine, what else do you have to do?

• I asked all my exes for constructive criticism and wow, it got savage