Joy to the world! These are all the Christmas films on Netflix right now

Oh my god I cannot WAIT to start binging

Welcome to December where nothing matters any more. All you want to do is light nice-smelling candles, watch trashy Netflix Christmas films and stuff yourself with food like the Christmas Dinner Turkey. It's a mood.

Holiday in the Wild

"African sunsets. Majestic animals. A rugged stranger. And a newly single woman whose second act has just begun." It's so cheesy, you will love it.

"Fractured friendships, fledging romances, a stranded pop star — and an unforgettable party. Falling snow ushers in the unexpected." A feel good watch for all ages. 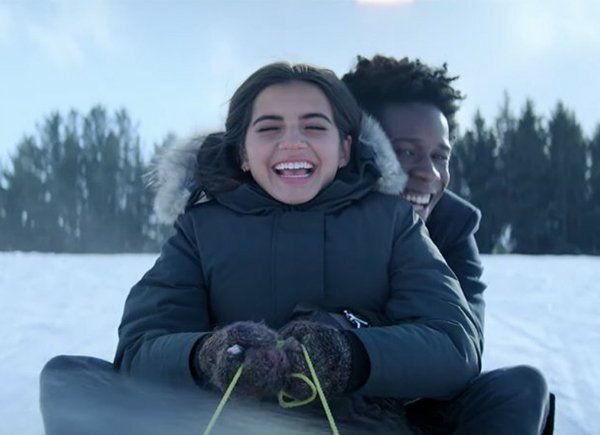 "Fleeing the family business and an arranged marriage, Santa's daughter chooses a magical adventure of her own: College."

A cartoon for the whole family. "A selfish postman and a recluse toymaker form an unlikely friendship delivering joy to a cold, dark town that desperately needs it."

The Knight Before Christmas

Oh my god. There's so much to say about this film. It's nonsensical. The romance is sickening. But, you will love it really. "She'd given up on getting her own happily ever after. Then a knight showed up, just days before Christmas — shining armour and all." It stars Vanessa Hudgens.

Another Vanessa Hudgens classic, but this time with a terrible British accent. "Stacy makes delicious confections. Her look-alike has royal connections. Swapping lives gives both a taste of what they're missing."

"A Christmas reunion becomes a gateway to the past in this three-part series that explores the intimate complexities of one family's history."

"Stranded at school before holiday break, a precocious girl gets into the spirit of saving when a trio of robbers trespass and hold the janitor hostage."

Christmas with a View

"Still reeling from a business failure, the restaurant manager of a ski resort finds her world jolted by a new chef, who has his own hidden past."

"A talented photographer stuck in a dead-end job inherits an antique Advent calendar that may be predicting the future — and pointing her toward love."

The first film of the Christmas Prince series. "Christmas comes early for an aspiring young journalist when she's sent abroad to get the scoop on a dashing prince who's posted to be king."

A Christmas Prince – The Royal Wedding

"A Year after helping Richard secure the crown, Amber returns to Aldovia to plan their wedding. But her simple tastes clash with royal protocol."

A Christmas Prince – The Royal Baby

This one drops on the 5th December and it looks like it's going to be so good. "Christmas brings the ultimate gift to Aldovia: a royal baby. But first, Queen Amber must save her family and kingdom by unwrapping a monarchy mystery.

"Two girls realise they're both visiting grandparents they've never met and decide to switch places to see how the other half lives."

A Wish for Christmas

"After Sara's boss steals her bright idea, she asks Santa for the courage to stand up for herself. But can 48 hours of magic make a lasting difference?"

"A widowed radio DJ and his four spoiled kids need to tighten their belts and pull together when their life of luxury turns learn just before Christmas."

"Gathering to celebrate Christmas together for the first time in four years, the Whitfield clan uses the opportunity to air their true feelings."

Once Upon a Holiday

"A princess runs away from her royal duties during a Christmas visit to a big city and meets a nice guy who shows her the joys of living a normal life."

I'll Be Home For Christmas

"Assistant DA and single mum Jackie's plans to wrap up a big case and enjoy Christmas with her daughter are disputed when her estranged dad visits."

"Despite her vain stepmother and mean stepsisters, an aspiring singer works as an elf at a Christmas tree lot and finds her own holiday miracle."

"After accidentally crashing Santa's sleigh, a brother and sister pull an all-nighter to save christmas with a savvy, straight-talking St. Nick."

"To inherit her father's company, socialite Ellen must first visit his small hometown, where she learns the value of hard work and helping others."

Love Actually and The Grinch have been removed, but there's some speculation they will be dropped later on in the month to build up the Christmas momentum. Other Christmas films which aren't on Netflix include Home Alone, Frosty The Snowman, Elf, A Christmas Carol and The Holiday.