Why does everyone hate Molly-Mae????

Belle has broken her silence following her split from Anton 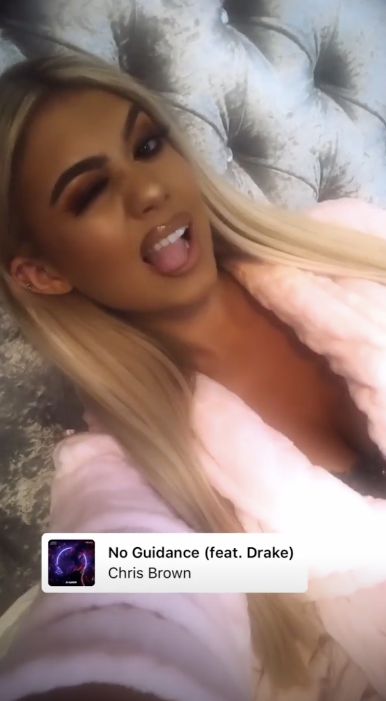 The lyrics of the song are as follows: "Lil' baby in her bag, in her Birkin.

"No nine to five, put the work in.

There's some hidden meaning there I'm sure.

The 2018 Islanders feel like a distant memory now, but Dr Alex is still kicking about. The full line-up for Celebrity MasterChef also includes Vicky Patterson and Joey Essex. Also look at his tash. Jesus Christ.

Spend your life doing what you love and following your passions ?? Happy hump day everyone ??

Tommy has a new BoohooMAN collection and he’s handsome af

You know what, personally didn't see what the fuss was about with Tommy over here, but BoohooMAN has changed my mind. Well done BoohooMAN.

It’s happening!!! I’m so excited to announce that I am the new UK Brand Ambassador for @boohoomanofficial ?? I’ve been a fan of the brand for years and with them being Manchester born and bred, the collaboration means even more to me ?? I’ve created an edit of my favourite pieces – The Tommy Fury Edit, AVAILABLE NOW (hit the link in my bio to shop). There are lots of big things to come so keep your eyes peeled ? ? #AD

Tommy launched his collection in Manchester two days ago. A load of Islanders were there to support (but also probs for the beers).

Amber’s been dropped from Dancing on Ice for Maura

The Mirror has reported the head honchos at Dancing on Ice much preferred Maura, who's currently acting as an agony aunt on This Morning, to Amber.

A source told The Sun Maura was picked for her "sense of humour and personality." The source also said she hopes Curtis "can now teach her more moves, even though she will be on the ice."

It's okay though – you weren't going to watch Dancing On Ice.

Pictures on The Daily Mail show Anna and her legend of a sister partying in a club in Mayfair. Obviously it was in Mayfair.

Drake was also there celebrating the return of Top Boy, where he said hoped it would be as captivating as Love Island. Does this mean Drake watches Love Island? (No.)

A source told The Sun: "Michael was one of the stand out stars on this year's Love Island thanks to his love triangle with Amber and Joanna.

"He's had a lot of female attention since leaving the villa but hasn't found that special someone, so he's hoping this show will help fix that."

Rumour has it the revamped show will air in Winter, and will be named Ex on the Peak. Georgia and Niall from last series will also be taking part. What fun!

While all the other Islanders are making six-figure deals left right and centre, Anton's doing this:

Also he got dumped. Hard lines.

Megan Barton-Hanson has a new tattoo, but it’s spelt wrong

According to The Mirror, Amy's been hanging out with 48-year-old DJ Toby Anstis, who she met at Brighton Pride. They apparently bonded over their mutual love for The Lion King musical, which is enough to make you vomit pure Skittle juice.

A source told The Mail Online: "They went to see the Lion King together at the West End because they are both huge fans of musicals. Toby was once in Grease: The Musical, so they bonded over that.

"They get on really well. They have been out together a couple of times and have been to the theatre and dinner."

Tommy and Molly-Mae have bought a house together

These two are clearly not messing about. After a week of dominating the news cycle they're now set to dominate the property ladder, and have moved into a flat in Manchester.

"We’re both really happy. We’ve bought an apartment in Manchester and we’re going to move in together.

"We’re both extremely busy, but there to support each other too. It’s amazing."

They're filming a reality show there. You better not watch it.

Tommy has also been snapped up to flog mayonnaise. Please do not watch the below video you want to avoid the pain of cringing so hard your shoulders spasm.

Think I placed all my eggs in one basket in the villa? Wrong. I’ve had my head turned by @HellmannsUK ? Video now in my bio ??? #TommyxHellmanns #Ad

Well Amber's put paid to the rumours she's not getting that bread.

Sis please don’t tell me you think I’m out here doing nothing?
I always do the most
Be patient! https://t.co/s4uj0cQ1dN

Be patient guys! Amber will flog merch to you soon I promise.

The Sun have said Molly has signed with a hair brand, she is getting that bread, yeeting that wheat, and FEASTING ON THAT YEAST GODDDAMN.

To celebrate my launch with @prettylittlething we’re giving away the whole collection PLUS £1000 Cash? For your chance to WIN follow these steps… Step 1: follow @prettylittlething Step 2: tag a friend on their competition post? For bonus entries, share this post on your story! Comp ends Midnight (BST) 07/09/19 full t&c’s can be found on @prettylittlething FB page?

This follows the brouhaha of Molly-Mae's much-discussed PrettyLittleThing range, which left the other Islanders "furious", as it prevented them from signing any deals.

A source told The Sun: "All the Love Island girls have been blocked from doing any work with PrettyLittleThing because of Molly-Mae’s big money deal with the clothing brand."

The overcooked beef that is the Anton-Molly-Mae feud spilled over into Tommy's BoohooMAN launch, and the now split-up couple weren't there.

Anton was instead taking a break from making TikToks to party in Ibiza, which was probably a lot more fun.

Not only did Molly-Mae not invite Yewande to her PLT launch, she also doesn't even speak to Yewande! The nerve!

During an Instagram Live Q&A, Yewande was asked whether she and Molly-Mae were friends. Anna, who was also in the livestream, raised her eyebrows at Yewande.

Would’ve been a supermodel if it wasn’t for my knee injury ?#mindyourownbusiness

She said: "Well we don't really speak to each other."

"She was not busy at all, she was very much free."

If you don't read Popbitch, you need to grow up and start doing so, because they've poked some serious holes in Lucie's recent deal with "Peng Hair."

They wrote: "Lucie Donlan from Love Island made a lot of headlines over the summer when it was announced she’d signed a £200,000 contract to be the face of Peng Hair. Seems like an awful lot of money for a hair company with five followers on Twitter to be shelling out for an ITV2 celeb who wears extensions. So what’s the deal here?

"Well, if you go to the Peng Hair website, it lists the address you can return items to as 35 Chequers Court, Salisbury. By some remarkable coincidence, 35 Chequers Court also happens to be the registered business address of Neon Management: the talent agency that represents Lucie.

"A huge, headline-generating deal sorted between three companies that are all registered at the same address! What are the chances?"

Our new packaging has us gassed! You guys are loving it and we're so glad ?

They look very similar to these:

Opening a salon is pretty hectic, so the attention has been focused on @luciella.co recently! But we are back now, totes promise! New and exciting things coming to Luciella Lashes ?

The woman behind By.Luciella (the second picture) claims Kady has been deleting comments suggesting Kady her off.

She said: "Her ByKady instagram is deleting comments from and blocking all my supporters. Please raise awareness of this and support local."

The poor bright-eyed 2019 cast probably don't see the inevitability of this happening to them. The poor little lambs.