You should probably sit down for this

Over the weekend you've probably seen everything kicking off between Chloe Ferry and Amber Davies. If you have no idea what's going on in this argument then you're not the only one. There have been makeups, breakups, cheating claims and a whole lotta Instagram stories – all over Sam Gowland.

The drama all started with this tweet from Chloe: 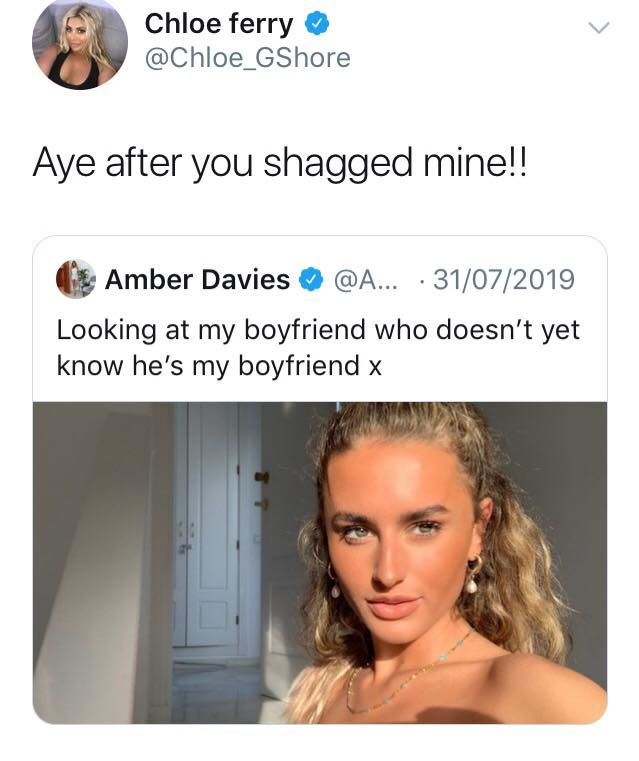 This news shook the Fiat 500 community to its core, but the argument has been going on for months.

So to put this weekend’s epic social media spat into context, here’s a rundown of everything that’s happened between Chloe Ferry, Amber Davies and Sam Gowland. You’re welcome. 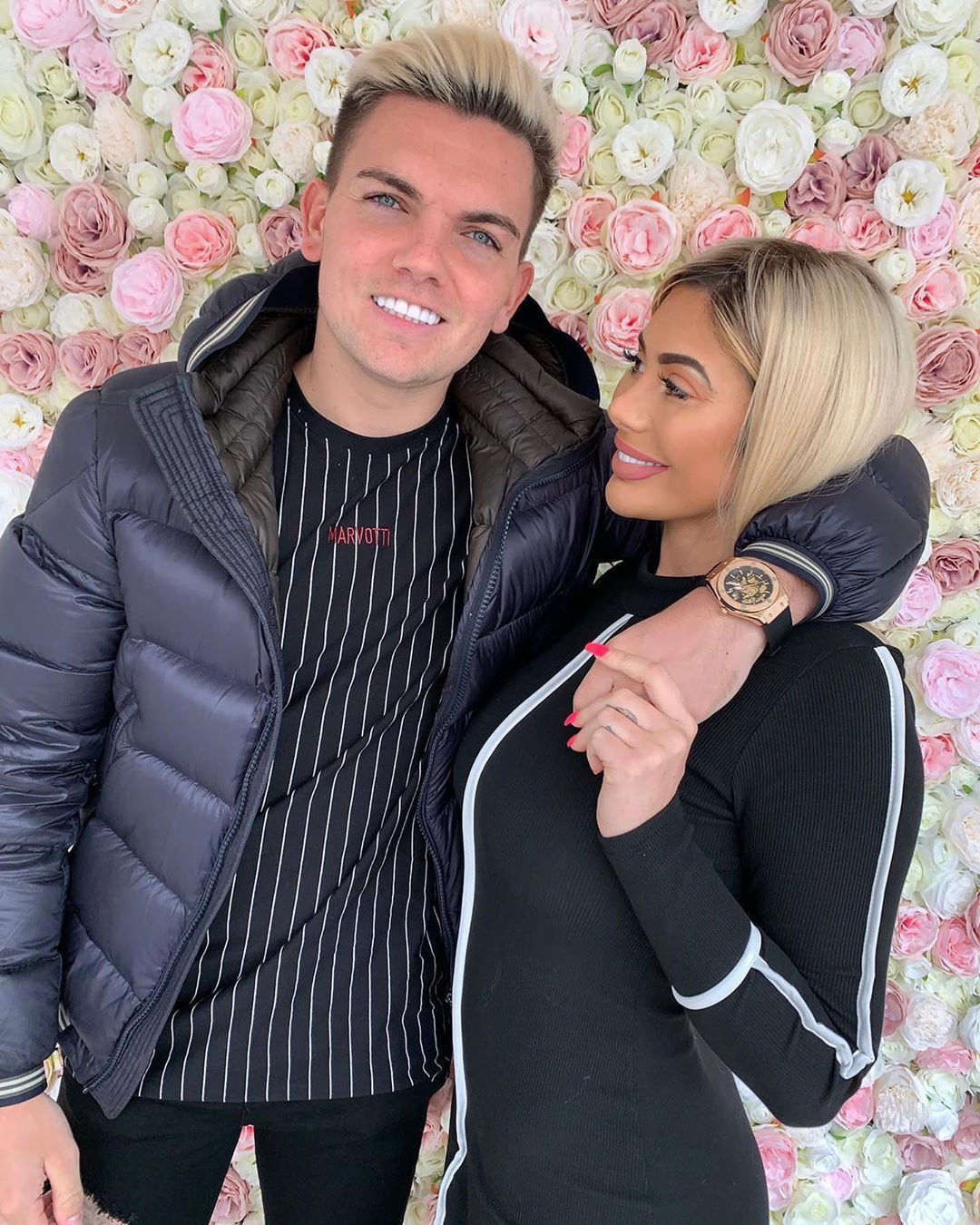 Sam left the villa with fellow Islander Georgia Harrison, but their relationship didn't last very long. Fans speculated that Sam cheated on Georgia when she tweeted saying: "Would like to confirm that myself and Sam are no longer together. Unfortunately for some men one girl isn’t always enough."

Sam and Chloe then got together. But in May this year, the pair announced their split. Chloe wrote on her Instagram story: "It hurts me to say this but me and Sam have gone our separate ways. We are still friends. Things carry on as normal. Bring on Saturday for the shop opening." They had been together for 17 months.

There were also rumours Sam cheated on Chloe. Chloe said on Instagram at the time: "I had so many messages from girls when I was with Sam that he cheated on me and I have had more now since we broke up.

"I am trying to get on with my life and be a little bit sexy and I am getting shit for it. But I am not the one who cheated." Chloe was responding to negative comments she was getting when she posted a bikini picture after splitting with Sam.

Sam was pictured out with another girl in Birmingham and The Sun reported he "bedded" someone from Love Island shortly after his split from Chloe. Fans jumped to the conclusion he was back with Georgia Harrison, but this was denied.

The pair then got back together, but split up again

Just a week after splitting up, the couple were reportedly "giving their romance another go". 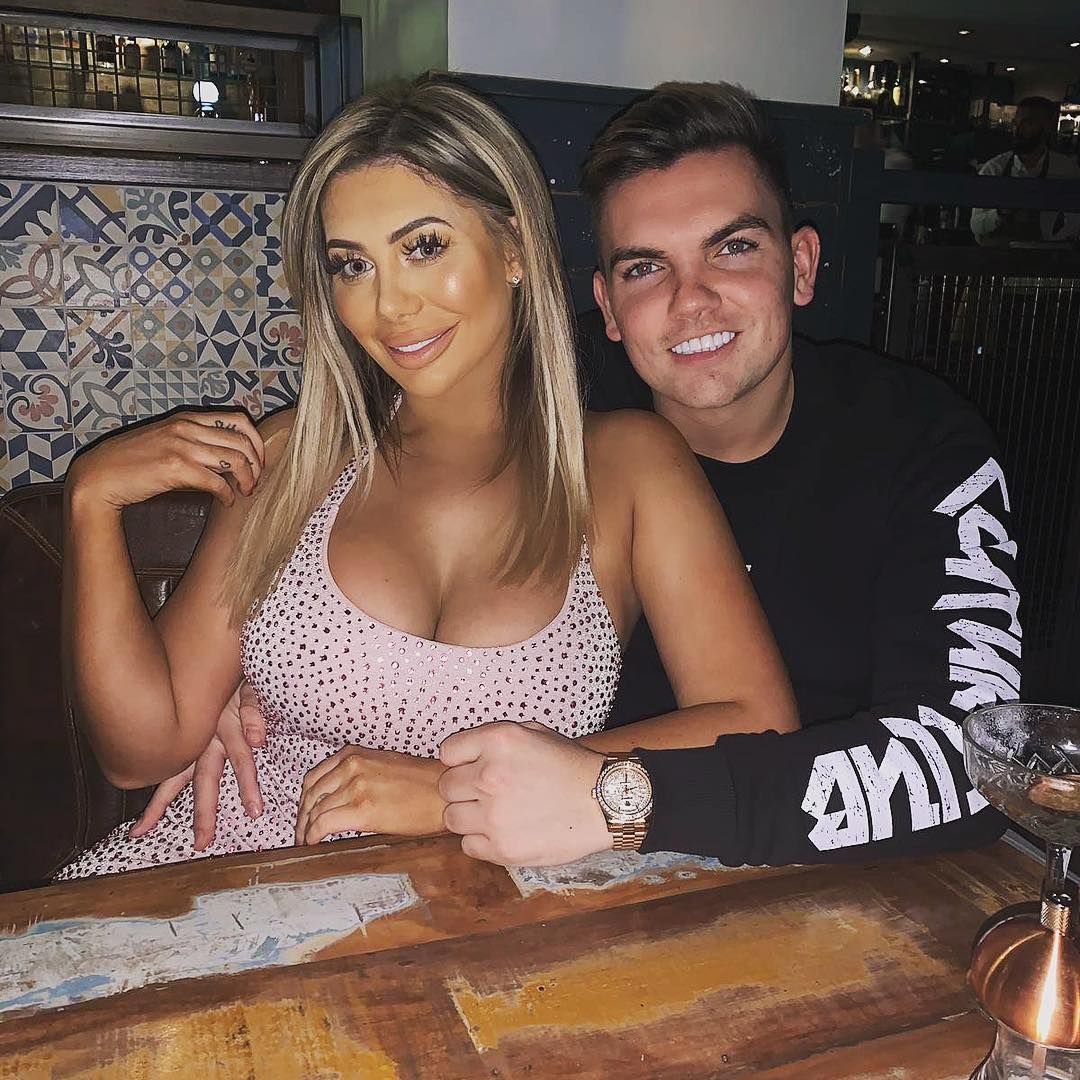 Then in July it was announced the couple "split for good" and Chloe booked a one way ticket to Ibiza.

Then Sam said Chloe cheated on him too

The plot then thickened even more, as Sam accused Chloe of cheating on him in Ibiza.

Back in August Sam posted an Instagram story (of course) explaining it all. He said Chloe cheated in Ibiza and was "begging to get back together". He said it was going to come out on camera in Geordie Shore that she cheated on him. He said he "wanted to make it work".

He also claims she "shagged a guy yesterday" (when the video was filmed) and says "what kind of girl does that? It's a bit of a mug for me being too nice for this long."

Now Chloe has accused Amber Davies of sleeping with Sam

Over the weekend, Chloe Ferry posted a number of videos on Snapchat and Instagram explaining her side of the story. She put out the videos after tweeting Amber accusing her of "shagging" her boyfriend.

Chloe tweeted this on Friday (16th)

The series of videos posted by Chloe said: "So I've been very quiet about the whole situation between me and Sam but there's a lot of things that people don't know. Sorry I'm shaking because I've just found something out which has really hurt.

"So, God I feel ill, I've gone and looked for the laptop because me and Sam are still living together and I'm still in love with him. I went on his laptop to look at houses and what popped up was a girl he's been messaging whilst we've been going to bed together.

"I literally kept my mouth shut for so long and let him paint such a bad picture about me when everyone knows that's not me at all. This person has literally ruined me. To go on that laptop and see him messaging when you're still in love with him is just awful.

"I cried in bed last night when we went to bed together. And I said to him I went, 'can you promise you're not texting anyone else?' and he lied. I would have had more respect for him if he said he was.

"So the Amber Davies crack basically what happened is, an article came out about Sam and I got told it was about her. I rang the papers and asked about who it was. I asked Sam and he said it wasn't true, I asked her and she said 'no I don't have time for that'.

"I believed her for so long but I had my doubts. I looked on the laptop and it's true. So basically Sam and Amber have lied because I found messages on the laptop. I also found out the day after we finished, he [Sam] had sex with Amber Davies." 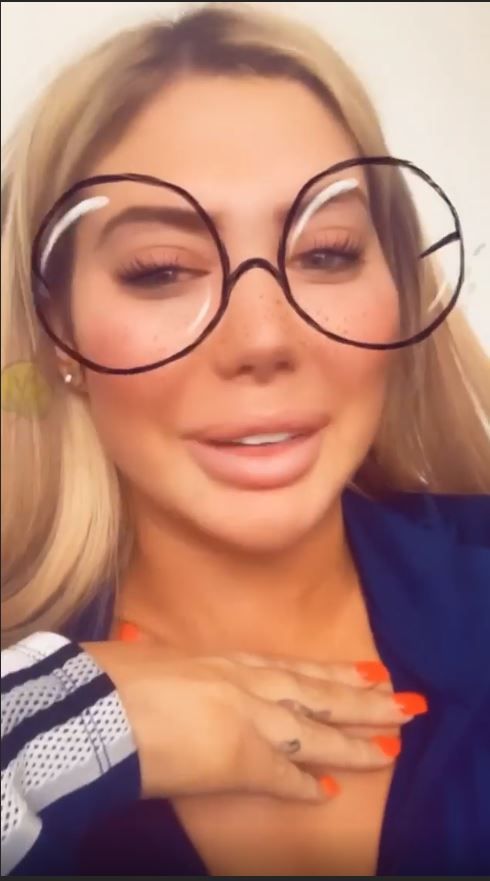 Amber and Sam both deny everything, obviously

Amber tweeted a response to all the drama that said: "Shocked at how people can bite so hard after only knowing one side of a story. Some of the abuse I’ve had has been heartbreaking! Peace and Love. Always! @SamGowland123 and I are friends and only friends. Nothing has ever happened between us. Can’t believe I have to tweet this."

Shocked at how people can bite so hard after only knowing one side of a story. Some of the abuse I’ve had has been heartbreaking! Peace and Love. Always! @SamGowland123 and I are friends and only friends. Nothing has ever happened between us. Can’t believe I have to tweet this.

She then tweeted again saying: "It was someone from a Chloe’s side that approached the papers initially about the allegations. I’m saying no more I’m tired of it all!"

She attached two notes to the tweet that read: This is the story. A couple of months ago the papers contacted Sam and I's management saying they were running a story that we had slept together. We hadn't. And both parties denied the allegations. A couple of weeks ago Sam replied to one of my Instagram stories and I ignored him after all of the drama. He then went on to message me saying he hoped the whole situation hadn't ruined our friendship because it was quite frankly RIDICULOUS.

"It was several months ago when the papers contacted us. It was in fact someone from Chloe's side TRYING TO SELL THIS STORY in the first place. The last story of mine is FACTS. For Chloe to take to her 3m+ followers…assume, manipulate and take something out of context, EVEN AFTER her and I exchanging messages and me reassuring her that NOTHING HAD HAPPENED. Is shocking."

Amber Davies explained the story in detail, defending herself. Sam on the other hand, posted a picture of Chloe's face on an Oscar award. Nice.

Then Chloe leaked the 'screenshots' on her Insta story!!!

Chloe posted the messages she found on Sam's laptop on her Instagram story, for all to see.

They don't actually seem to prove that much. The messages say Sam messaged Amber saying: "You gunna stop ignoring me on Insta, I don't want what happened before to change out, daft arse I'm good mates with ya."

Amber replied: "Course we are still mates!!" And Sam said: "Good! Just don't want it being weird or different Ambs there's no need for it to be and if I see 'seen' one more time on ya Insta after I messaged ya I'm gunna kill ya".

It's not just Chloe Ferry and Amber Davies involved in this argument. In true D-lister style, Love Island 2018 queen Megan Barton-Hanson came wading in too. She historically hasn't got on with Amber Davies, after it was said her ex Wes Nelson was sexting Amber.

Megan has been very vocal with her opinion on Amber in the light of the current drama. She posted on her Instagram story saying: "Nothing makes my day more than when a snakey bitch gets exposed! Imagine moving like that and lying to numerous heart broken girls that you ain't shagged their ex! I'm all for getting that D but have some respect or just own up to being a heartless little rat." 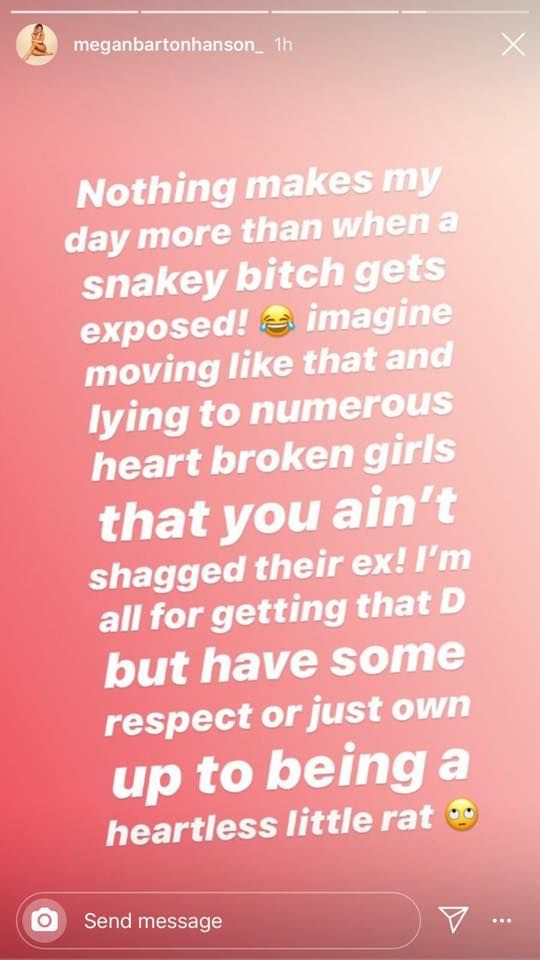 The post was quite swiftly deleted, but not before it already had maximum impact.

Woah, that was a lot.

• Before the fillers: What did the Geordie Shore girls look like before cosmetic surgery?