And nobody even reacted!!!

A lot happened on Love Island last night so you'd be forgiven if you didn't spot a familiar face show up in one of the scenes. Yep, the Love Island shop keeper that Anton gave his number too was practically identical to one of the girls serving behind the bar.

People noticed (obviously), and are now accusing the show of hiring actors and being staged. One tweet said: "The whole Anton and the number situation was SO scripted looool they could’ve used a different actor. She was the barmaid today and the shop keeper the other day, if it was real the Islanders would’ve definitely said something about it being the same lady LOOL".

The whole Anton and the number situation was SO scripted looool they could’ve used a different actor. She was the bar maid today and the shop keeper the other day, if it was real the islanders would’ve definitely said something about it being the same lady LOOL? #loveisland pic.twitter.com/lkOzbCPxxP

When we first met the girl, the boys were set the task of cooking for the villa. Anton, Jordan and Tommy had to go to the shop to buy the ingredients. At the end of the shop, Anton gave his number to the girl working at the tills. 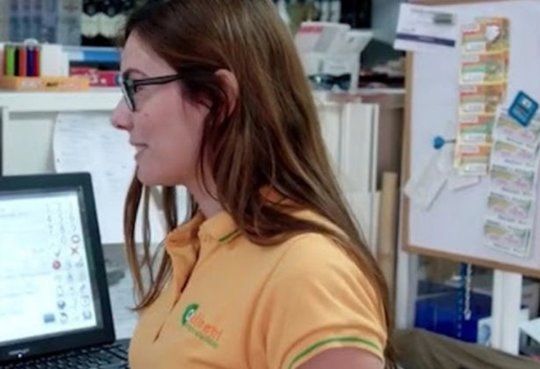 He said it was "banter" but when the news hit the villa, all hell broke loose. Anna said she was shocked, Joanna called it "muggy" and it began the current downfall of Belle and Anton's relationship.

But when the checkout girl was literally RIGHT BEHIND Anton serving drinks in the Love Island club, nobody even reacted.

She is RIGHT there

It last night's episode, the Islanders were treated to a night out at the Love Island club. But when they arrived, who was serving drinks to them? The girl from behind the shop till. Given none of the boys even reacted to her, fans began to think the whole thing was staged.

Do the producers really think we weren't going to notice??

Fans are now saying the show hires actors and are calling the whole drama a Love Island conspiracy. I mean, they do look almost identical.

She must of rang Anton for an invite. ☕️? #loveisland pic.twitter.com/VeoTTgqDOs

Now the two girls might not be the same person, but they are pretty similar looking – right?