This is everything the Maddie McCann documentary missed out

Ok this is a lot

It’s been a week since Netflix released their latest true crime documentary, The Disappearance of Madeleine McCann. The doc’s had scathing reviews because it’s apparently brought nothing new to the table, and the directors didn’t manage to actually speak to the McCanns.

The eight-part, true crime series tells the story of Maddie, who famously vanished from the family’s apartment on holiday in Pria da Luz, Portugal.

Her parents left her while they had dinner with friends in a nearby tapas restaurant. Given the documentary is so long, you’d think the case would be quite well covered, but surprisingly a lot was actually missed out. Madeleine McCann went missing in May 2007

The Disappearance of Madeleine McCann documentary missed this entire theory

One Twitter user tweeted about what the documentary was missing, in his opinion. The tweet has gone viral, and is pretty deep.

He called the Netflix documentary “shit” and then started a thread with theories and articles that were never mentioned in the Disappearance of Madeleine McCann documentary.

Parts of the thread have been removed, where it makes some pretty crazy claims. It goes across pretty wild conspiracy ground, some of which is a bit true, lots of which has been thoroughly debunked — including linking Maddie’s disappearance to the “Pizzagate” conspiracy.

Clement Freud was friends with Kate and Gerry McCann and regularly spoke via phone/email. Clement invited K&G for dinner at his holiday home in Praia Da Luz (less than 10 minutes away from the apartment Maddie was taken from) https://t.co/3FoWirRsrC

On March 16th 2016, John Podesta’s personal gmail account was compromised in a data breach. Some of the emails were obtained by Wikileaks, which published over 20k pages of emails. In said emails John was communicating using FBI certified paedophile code

If he is NOT talking in a code that these emails make no sense at all and are complete gibberish.
Feel free to take a look at some, it goes v deep

Alright so a confirmed paedophile let’s two of his possible paedophile mates stay at his holiday home in Praia da Luz at the same time Maddie went missing.. could be a coincidence???

This part of the thread has been pretty widely debunked. The so-called “code” the email was written in is part of a wider conspiracy theory, and evidence has suggested it might not actually be a thing.
As well as this, the information that the Podestas were in Portugal is solely sourced to “FBI Anon” and quoted on a conspiracy news site. This site is known for creating pretty out there theories, including one that the Queen is a reptile. So maybe not the most trustworthy.

You can see the e-fit in the crimewatch special in the bottom left pic.twitter.com/7GMBzFwg3R

However, Snopes did debunk the claim that the efits resemble the men. The efit was two images, but was actually an appeal looking for just one man, that looks like both pictures. The efits were taken very out of context when placed next to the Podesta brothers.

The McCans described Madeleine in a very weird and strange way, I know that all parents will gloat about their child’s beauty/cuteness (idk how to put videos on twitter but here’s a few quotes of Kate describing Maddie) “her perfect little form, her perfectly shaped head”

This is a DIRECT quote from Kate’s book “I told [Gerry] about the awful pictures that scrolled through my head of her body, her perfect little genitals torn apart” (page 129)

This was in her AUTOBIOGRAPHY, not an accidental slip up during an interview, I’m just scratching the surface of things that suggest the McCans vvvv strange and possible predators

The intial story has changed multiple times, Kate claimed that the abductor jemmied the window/blinds open and climbed in through the window and kidnapped Maddie, there were no signs of a break in and only Kate’s DNA was found at the scene pic.twitter.com/RHsN0EMoS7

They then tried to pin the kidnapping on a hotel staff member and when that didn’t work their story changed a little more and they blamed it on the maintenance man; both men were later cleared.

Jane, Kate and Gerry’s statement on what happened on the 3rd of May don’t even add up, there are many contradictions, I won’t list them all here.. please click the link https://t.co/iOjcCb6HOB

THIS WAS RULED AS “INSUFFICIENT EVIDENCE”

I don’t know what happened to Madeleine but this case gets fucking crazy, I just wanted to point out some details I’ve known about which I haven’t seen anyone touch on.. if I’ve missed anything out please let me know

This thread is a complete WHIRLWIND. And anyone that has this much time to put this much information together, has go to be pretty invested. But whilst this theory is very interesting, a lot of the points it makes have seemingly been proven to be untrue.

Most notably, Maddie’s parents, Kate and Gerry McCann, have repeatedly refused to take part in the documentary. They have also encouraged friends and family members close to them to refuse interviews. Kate and Gerry were also given the chance to view the documentary before its release, which they also declined.

Clarence Mitchell, the family’s former spokesman, who still assists with media inquiries, told the Guardian: “Kate and Gerry and their wider family and friends were approached some months ago to participate in the documentary. Kate and Gerry didn’t ask for it and don’t see how it will help the search for Maddie on a practical level, so they chose not to engage.” 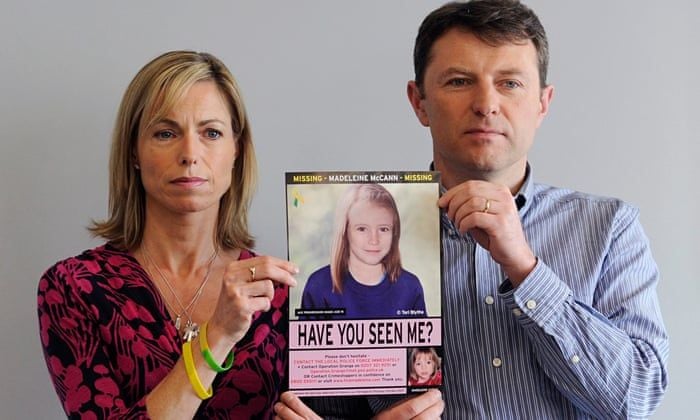 In a statement on their website, FindMadeleine.com, Kate and Gerry McCann said: “We are aware that Netflix are planning to screen a documentary in March 2019 about Madeleine’s disappearance. The production company told us that they were making the documentary and asked us to participate. We did not see and still do not see how this programme will help the search for Madeleine and, particularly given there is an active police investigation, could potentially hinder it.

“Consequently, our views and preferences are not reflected in the programme. We will not be making any further statements or giving interviews regarding this programme.”

The Disappearance of Madeleine McCann also missed out any new info

The main reason The Disappearance of Madeleine McCann Netflix documentary has been criticised is because it’s been argued the documentary didn’t actually bring out any new information.

A review in The Guardian said the documentary “offered no new facts, no new insight – it didn’t even have a point of view.” So basically it was missing everything then?

The review says “it was a simple retelling” and “it was purely a rehashing of everything anyone who was alive at the time, or who has been of an age to understand the periodic appeals on anniversaries, birthdays and other painful dates by the McCanns for more information in the 12 years that have elapsed since, already knew.”