Here is a look around the Neverland Ranch, that once belonged to Michael Jackson.

Where is the Neverland Ranch?

The site on Google Maps

The Neverland Ranch is a developed property in Santa Barbara, California. It's right next to Los Padres National Forest. The exact address for the ranch is 5225 Figueroa Mountain Road, Los Olivos, California 93441.

There's another property opposite the site, and a couple of schools and a vineyard nearby, but other than that it's pretty much in the middle of nowhere. According to Santa Barbara County Assessor's office, the ranch is approximately 2,800 acres.

The surroundings on Google Maps

What happened to the Neverland Ranch?

Notable events that took place there included: the wedding of Elizabeth Taylor and Larry Fortensky in 1991, the live Oprah Winfrey interview with Jackson in 1993, and an event in 1995 where Jackson and Lisa Marie Presley hosted children from around the world.

Neverland Ranch was searched by police in connection with the a trial that is covered in the Leaving Neverland documentary. This was after Jackson was charged with multiple counts of molesting a child in 2003. He was later acquitted of all charges. After the trial, Jackson said he would never live at the property again, as he no longer considered the ranch a home. He never went back. The facilities were closed down, and most of the staff let go.

After Michael Jackson died, it was reported his family wanted to buy the ranch and turn it into a memorial for him, for his fans to visit – similar to Graceland for Elvis Presley. These reports were later denied by the family.

The neglected ranch then fell into disrepair. The amusement rides and animals were gone by 2013, and replaced with a meditative zen garden and a section decorated with Peter Pan. In May 2015, Neverland Ranch was renamed Sycamore Valley Ranch, and was put up for sale with an initial price tag of $100 million. Extensive renovations had been made to the property.

The ranch was sold for $100 million. The price included the 12,598 square foot six bedroom mansion, the four-acre lake with waterfall, a pool house, three guest houses, a tennis court, and a 5,500-square-foot movie theatre and stage. In February this year, the ranch was back on the market.

Pictures of the ranch when it was owned by Jackson

Good Morning America produced a feature back in 2009, showing the "Then and Now" of Michael Jackson's Neverland. Obviously the "now" section is 10 years out dated, but the video shows pictures of what the park looked like when it was owned by Michael Jackson and being visited by children.

A map of the Neverland Ranch

Here is a map of the Neverland Ranch, and how it would have looked at the time of it being owned by Michael Jackson. This is the place the mean in the Leaving Neverland documentary stayed at, and what was on the grounds at the time. 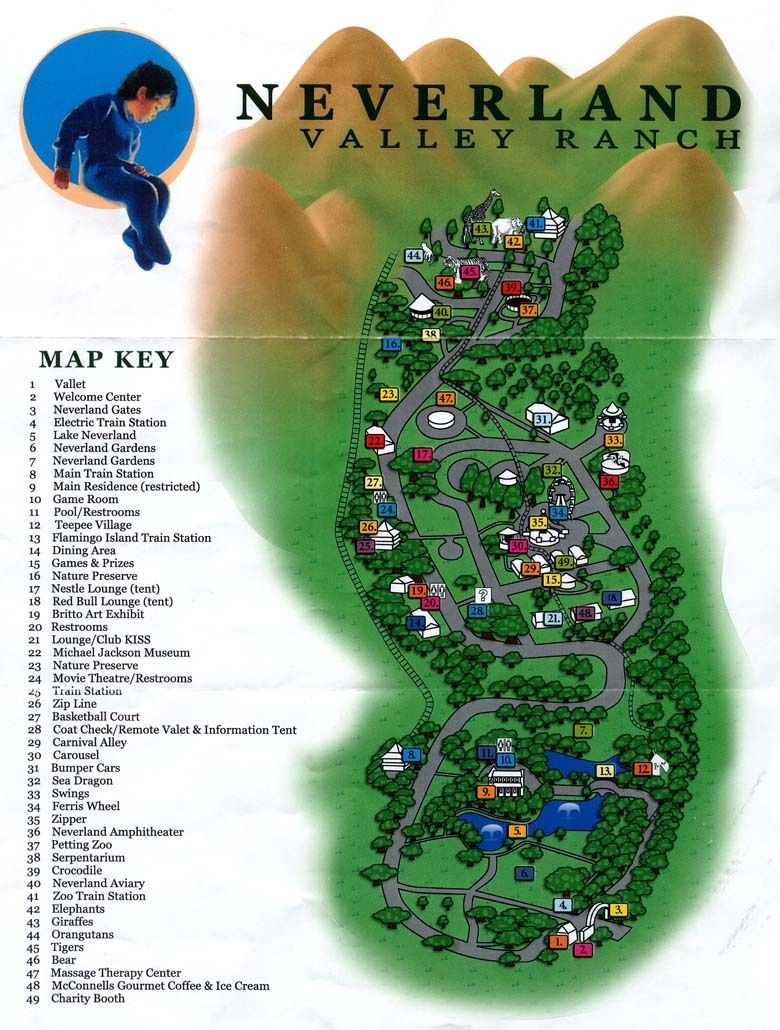 Map of the park for visitors

The ranch was entire, self contained theme park and adventure centre. It had 50 attractions in total, and even a rollercoaster on site. There were attractions such as a lake, gardens, train stations to get around, an art exhibit, lounge and club, movie theatre, zip line, basketball court, carousel, bumper cars, ferris wheel, a zoo with animals like crocodiles, giraffes, tigers and bears, a massage centre and food and drink stands and outlets.

There was also the main residence (labelled number nine) at the front of the park, which was the home of Michael Jackson. On the map this building is listed as "restricted". The house is in front of the games room and rest rooms.

A video about the site being for sale this month shows a detailed tour of the grounds as they are now. Watch it here:

The video goes around the entire grounds of the property. Including the front and the main residential building:

And also the grounds surrounding, which is set on over 2.5 acres of land in total.

The main residential house has six bedrooms and nine bathrooms in total.

Out buildings on the grounds

There's a four acre lake, a movie theatre, several barns and out buildings, a pool and tennis court.

Here's another video listing for the Neverland Ranch, which shows even more in detail drone footage of the grounds around the site, as well as inside pictures including the movie theatre and the bedrooms in the property.

The video is by Suzanne Perkins, who advertises "distinctive Santa Barbara Properties, and lists the now Sycamore Valley Ranch as the "ultimate ranch retreat and gated estate". 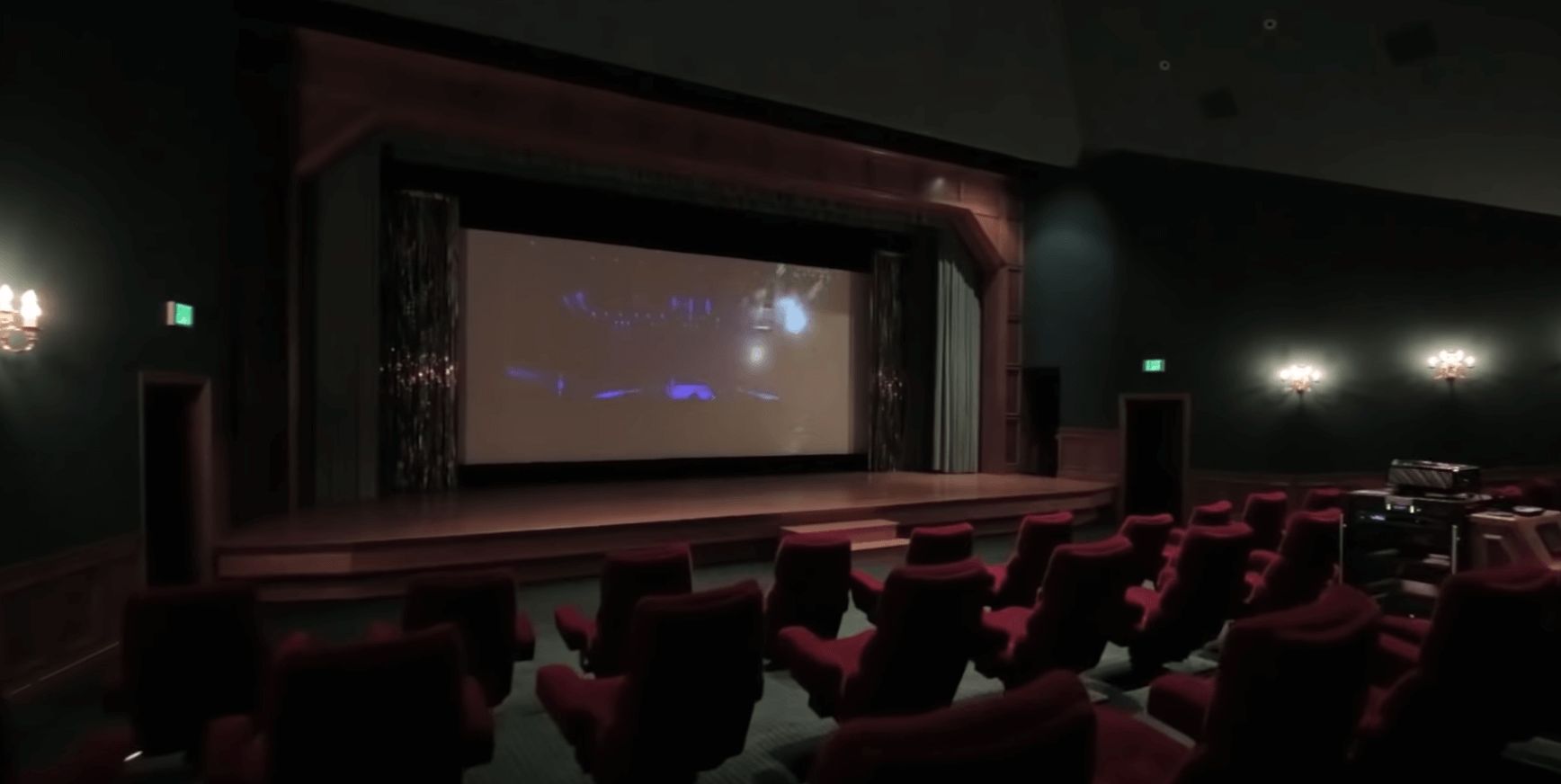 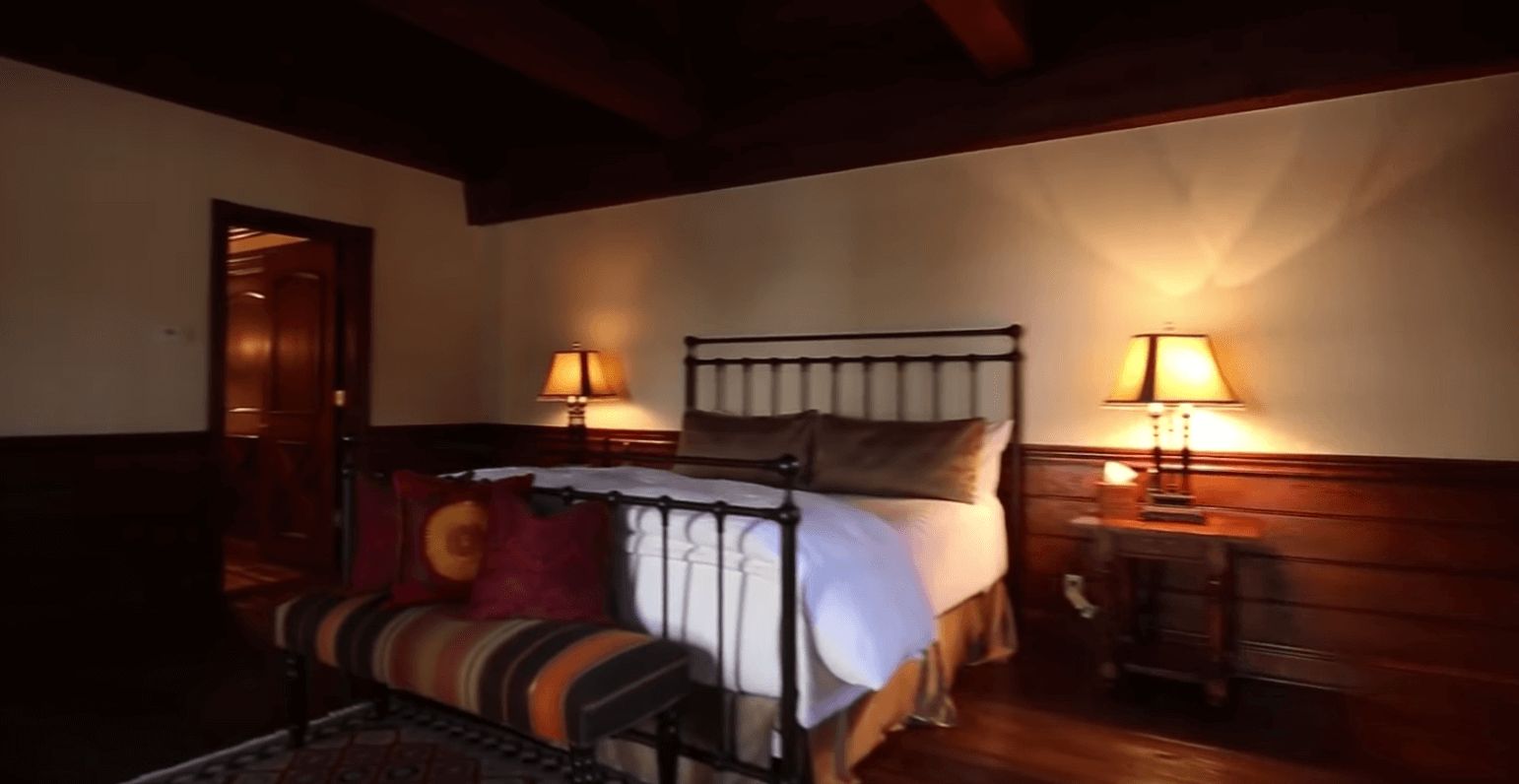 One of the bedrooms

How much is Neverland Ranch worth?

At the moment, the Neverland Ranch is for sale at $31million. However, it was also put on the market back in 2015 at an asking price of $100million. The price has slashed to less than half of its previous value in just four years.

• Leaving Neverland: The most shocking claims made against Michael Jackson

• ‘The Other Boys’: Jackson’s relationships with Macaulay Culkin and Brett Barnes