Ayahuasca is a traditional medicine and psychoactive substance that causes the user to have spiritual and mind-opening experiences.

It is used not only by the indigenous peoples who live in the Amazon river basin in Brazil, but also those who travel from all over the world to try it.

We spoke to one person who travelled to Vancouver Island in North America to a secret retreat to try it. Photos are strictly forbidden, but here is their story of what happened.

I’d heard about Ayahuasca over the last few years and was intrigued, but I had no idea how to get access to it. Then I met someone (a friend of a friend) who’d tried it and loved what she'd experienced and learned from it.

She happily gave me the email contact, so I could get myself on the list of this particular "circle" (new people have to be introduced by someone who can be trusted). Eventually, after dithering about whether or not to do it, I took the plunge and went for a weekend in May earlier this year.

I went on my own – my friends were all too scared and mostly thought I was crazy. But I’ve always embraced adventure, and I’ve tried most drugs at least once in my life, including hallucinogenics, whereas they’d never tried anything before, so they were naturally more freaked out by the very idea.

It’s a very personal journey anyway, so it’s not a problem to go on your own, and there are people to talk to the following day, both participants and leaders, who will support you if you need to process the experience in some way.

It cost $250 per night of ceremony, so it was $500 for me, plus a small donation towards food, which was simple, but excellent. I understand this is roughly the going rate wherever you go, at least in North America.

The other people attending were from all walks of life, and they ranged in age, from mid-twenties to people in their sixties. The types of people there included: yoga instructors, psychologists, physios, a firefighter, a teacher and a nurse, to name a few. Some had been participating in ceremonies for many years and everyone said they found it transformative.

Those running the retreat were people who’d been trained in Peru, and served apprenticeships with shamans. They were approachable and friendly, although they didn’t mix much with the participants during the day, because they needed to rest and recover from the previous night even more than we did!

Sometimes the experience is more challenging than others, as the spirit leads you to places in your psyche that you may have shut off for years, through denial or in self-preservation. But people are never forced to go where they’re not ready to go, and the people I’d spoken to who’d had a difficult night emotionally were all glad they’d gone through it, and felt cleansed and re-energised by the experience.

I wore comfortable clothing, yoga pants, baggy tops, that kind of thing. You’re basically lying or sitting on your mat for most of the ceremony, and then just lounging around in-between times, so it’s all very casual.

I was a bit anxious, but not really scared. I trusted what I’d heard about it, which was that the Spirit of Ayahuasca is a female, nurturing guide. I’d taken mushrooms and LSD before, and never had a bad trip, so I figured this would be along those same lines. I was more scared that being a bit older my body wouldn't be physically able to deal with it and I might end up with a stroke or something. But it wasn’t like that at all.

In terms of how I felt emotionally before the ceremony began, I felt anxious, but excited and hopeful too. We’d been told to come with a clear idea of what we wanted to ask Ayahuasca to help us with, what we wanted to heal. I was in the process of getting over the end of a very long-term relationship. I was emotionally hurt and shut down, so I was hopeful that this experience would help to reopen my heart and get me re-engaged and enthusiastic for life again.

Physically, I felt strong and prepared. It’s recommended to "eat clean" for at least two weeks if not a month before ceremony, avoiding caffeine, alcohol, drugs, and certain foods like wheat and dairy, onions and garlic, to prepare the body and to ensure the best experience.

The ceremony begins around 9pm, and doesn’t finish until about 3am. Everyone sits on their mats around the edge of a large room, about twenty of us in total.

The leader had three other guides to assist him, and once we’d all been cleansed with a sage brush, and had each introduced ourselves, the leader then gave us a broad outline of the way the evening would unfold. Then we each took a turn to go up and drink the medicine.

For first-timers, like myself, we were given a beginner’s dose, which suited me just fine! Once everyone had taken the medicine and was back on their mats, the lights were turned off, so apart from a couple of candles in the centre of the room we were in darkness.

It took about half an hour to start to feel the effects of the medicine. Initially, they were entirely visual, with beautiful and intricate psychedelics and 3D figures all around me. I was immersed within this visual field, and the colours and patterns were incredible, changing with every breath.

At the beginning it felt a bit overwhelming, as it was more intense than anything I’d known before, but I learned to open my eyes if it got to be too much, and the patterns disappeared immediately, and then started to slowly start up again in a completely different form. So with the sense of having at least a little control, I soon settled down and enjoyed the amazing show, occasionally wondering when the ‘healing’ part of the journey was going to begin. It eventually did, although because one loses all sense of time in this state, I have no idea how long it took to get there.

Physically I felt fine, although a few people around me were retching all throughout the ceremony (we all had buckets for this purpose) as they were affected by the medicine. 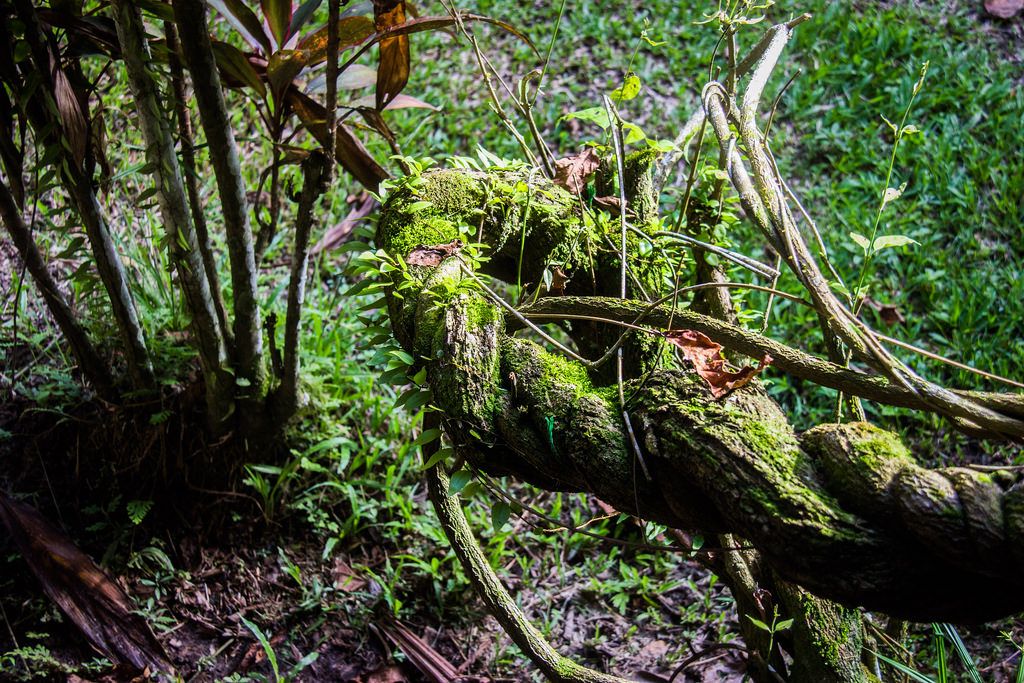 The vine that Ayahuasca is made from

I’d heard that nearly everyone throws up, but this wasn’t my experience, and I didn’t feel nauseous at all. One enters a ceremony with an empty stomach, and I could see why! Apparently the retching is thought to be a way the medicine helps some people clear blocked energy as it flows through the body.

Other people cry, or groan as a release, and so an interesting cacophony of sound happens, which is very odd at first. Luckily, this fairly unpleasant backdrop of sound is minimised by the extraordinary chanting of the four people who were conducting the ceremony.

The leader, who had trained for many years with a shaman in Peru, sang ancient Peruvian chants specifically developed to draw the participants into the experience and help access the Spirit. The other leaders joined in, and sometimes sang their own chants. Some of these other leaders were indigenous Canadians, and their singing was very different, but equally magical and appropriate, just in a different way. One leader was a woman, and when she joined in with the male singers, it was as if an angel had come down from heaven, her voice was so pure and beautiful.

As the psychedelic visual effects lessened, I began to see all the loves of my life in front of me, and experienced true, deep joy as I felt the love flow through me towards them. I was filled with intense gratitude towards the medicine for opening my heart as I’d hoped would happen.

Ayahuasca before being brewed

I had many other insights and experiences, but it's very difficult to describe the effect of the medicine to anyone who hasn’t gone through it, because it’s so outside of ordinary "reality". It’s hard to convey the sense of sacredness I experienced, without sounding slightly crazy.

I’m not a religious person at all, but this was an intensely spiritual experience. I’d been blessed with an encounter with God, in the form of the female spirit of Ayahuasca, and the sense of the "oneness" of everything and the inter-connectedness of all beings was intense and joyful.

I took the medicine for two nights in a row. With each consecutive night the Spirit takes you deeper, as you learn to handle and trust the experience. Other people there were spending four nights in a row in ceremony, and by the end of my second night, I could see why that could be a good thing! I’d had an extraordinary and enriching experience, but I felt that there was a lot more healing and learning that I could access by returning again and spending more nights there. I've now booked to return in September for four nights!

Immediately after the medicine wore off, at about 3am, I just fell into a deep sleep for several hours. The following day was spent writing in my journal and resting, and sharing the previous nights’ experiences with the other participants.

In a longer term sense, the power of the experience has stayed with me, though I did feel particularly energised, connected, and "alive" in the first couple of weeks immediately afterwards.

I had an amazing and positive experience with Ayahuasca. Obviously, I'm no expert, but I would highly recommend going on a medicine journey to anyone who has a respect for the power of the medicine, who has healing work to do on themselves (and who doesn't?!). It's important, however, that you are in the right frame of mind, as in you are relatively stable, don't have mental illness, and have supportive people in your life.

A journey like this is particularly effective in treating anxiety and depression – formal research into the benefits/ downsides of many hallucinogenics, including Ayahuasca has been on the increase recently. 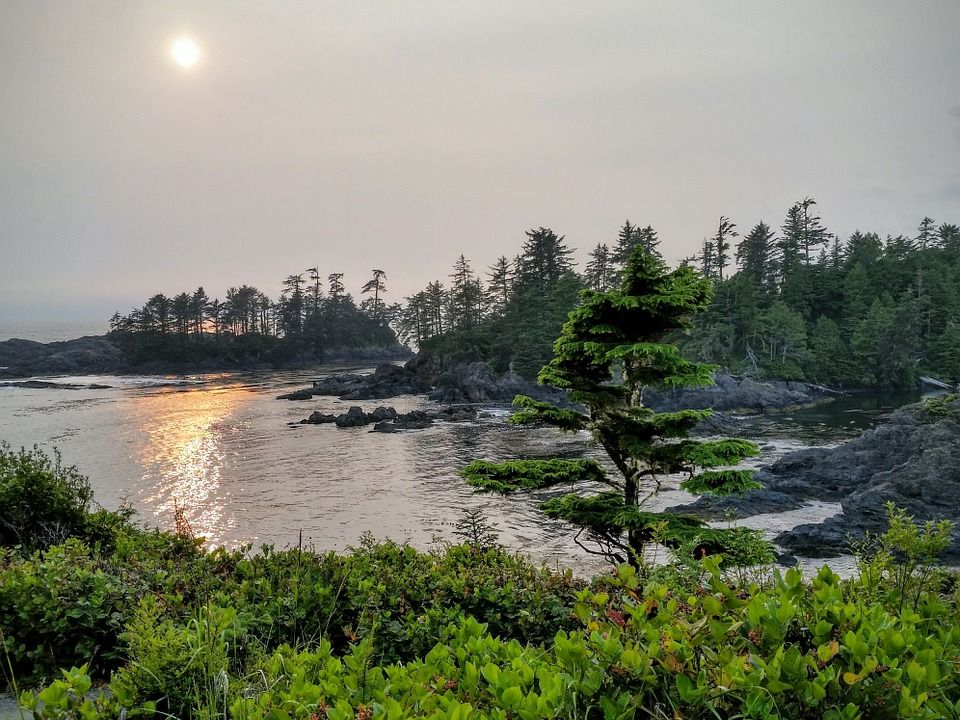