People are convinced footage has been edited out

The last person you'd expect to turn on Georgia would be her best friend and the nation's sweetheart, Dani. But it's happened.

And if you missed it, here's the recap: Georgia kept insisting she's loyal even though she decided to split with Sam and couple up with another guy. Dani had enough of her bullshit. The couples then had an argument on the terrace and it escalated from 0 to a 100 in a matter of seconds, ending with Dani and Jack calling Georgia "a little shit." 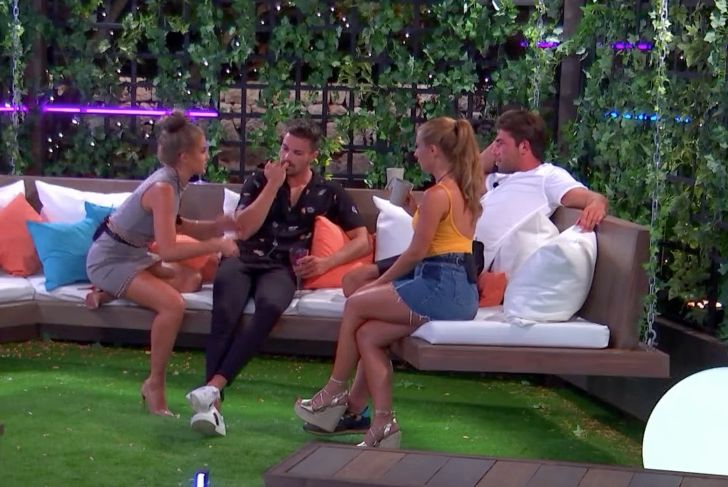 But hang on. Something doesn't quite add up here. We all know Dani and Jack. They're calm, collected and would never lash out on a friend the way they did last night. Right? So people are convinced some dodgy editing took place. Just re-watch the clip of it happening:

Something's not quite adding up about last night…

If you, like everyone else, are desperate to find out what could have possibly gone down between them all. I searched the depths of Fiat 500 Twitter for the wildest theories and this is what they are:

Georgia said she's loyal again and it pissed Dani off

Maybe Georgia used the L-word again to try and justify her actions for choosing to split up with Sam and couple up with one of the new islanders. And the pure contradiction of her words and weeks of built up tension between the friends made Dani flip.

Another theory is that the producers just sped up the entire argument and made it look like it was explosive. When in reality, the tension had just been building steadily.

A simple reason for all four of them acting bizarrely could be that the the argument had to be reshot because the original footage wasn't shot well the first time round. And considering none of them are very good actors, they were all acting awkwardly.

Also we know scenes have been reshot more than once when the cameras didn't catch them well in the past, so it wouldn't be crazy to assume the same thing happened again.

The most believable theory is that Georgia mumbled the c-word as she was storming off. And after people complained about Ellie using it last time, the producers decided to cut it out of the shot.

What did Georgia saaaaaaay?!!! Clearly something cut out there… probably a c bomb …#loveisland

But then why would they show Ellie calling Georgia the same word, but not Georgia saying it to Dani? They could have easily bleeped it out.

Georgia threw some of her drink at Dani or Jack

Others have noticed that when Georgia sat down, her glass was almost empty and when she was walking off, her glass was completely empty. Did she spill some of the remaining drips on Dani and Jack? Did Dani stand up to wipe her arm?

Does anyone else think Georgia threw her drink over Dani but it editted out? Thier reaction seemed like something more happened than was shown?? #LoveIsland

Though the Love Island producers have denied that Georgia threw her drink at the pair.

Georgia said something personal about Dani and Jack's relationship

What if Georgia said something personal about Dani and Jack's relationship and tried to make it out as though they're faking it to win? Georgia might have mentioned something that hit a nerve. Like them not having sex yet or the fact people think they're like "brother and sister."

The most interesting theory so far is that Georgia completely lost it and started claiming the whole show is fake anyway but the ITV2 couldn't air it. During the arguments, she said how others would have made the same choice and split up to stay in the villa, insinuating she knows the whole thing is a game anyway and everyone is in it for the money.

Pure speculation and I have no basis for this but just from the dodgy cut, I think maybe she said something personal, about Dani? Maybe she and Jack had sex? Or knew each other before? Something that production wants to keep secret basically.

All will be revealed tonight. ?