Cor blimey get a load of these flicks

Dani Dyer's romance with Jack on Love Island 2018 is winning the hearts of the nation. Whilst Alex is being creepy and patronising, and Megan shocks everyone by looking different before surgery, Dani's busy being wholesome af.

But when she's not being adorable in the villa, Dani's an actor.

And just like an invigilator lifting a box of exam papers, that raises a lot of questions: Which films has Dani Dyer, daughter of Danny Dyer, been in? Were they any good? (Spoiler: A few, no.)

If you're here, now, you will know Dani's dad is Danny Dyer. Essentially, Dani's career is split into two parts so far. The first is starring as an extra in her Dad's films and the second is forging a path on her own.

Vendetta, Run For Your Wife, Doghouse, and The Other Half. All films with Danny Dyer on the cover and Dani Dyer in the 'see more' bit on IMDb.

Basically, this is doing internships at your dad's work to pad out your CV, hoping somebody notices you.

And they did. During her day filming as an extra on Vendetta, she "absolutely blew away" the crew, according to the film's producer.

But being Danny Dyer's daughter has other advantages. In interviews, Dani has said Danny passed on the tricks of the trade, teaching her to always learn scripts, be confident in auditions, and be herself.

As sure as the passage of time turns squished grapes into rich wine, Dani Dyer's patience was rewarded. Give it a few years and she was being cast in her own right, with dialogue and everything.

Going purely from the movie poster, this film was cast with four different e-fit drawings of Ray Winstone.

Dani doesn't look anything like Ray Winstone, though. Instead, she was cast off the back of her performance in Vendetta. But she nearly didn't get the part because of her dad. "I'd never have taken it unless I knew she could pull it off and boy did she deliver," writes Jonathan Sothcott, the film's producer.

The catalyst for the film's whole old-versus-young East End gang vendetta is a scene where Dani's character, Lauren, nearly gets raped.

Filming it was a difficult experience for Dani. "I was quite scarred because I kind of believed it," she said in an interview. "I went home and was really sad and upset, but picked myself up again"

Further on in the film, she's still getting treated like shit, with a gangster telling her: "Cuddle? Fuck that, I got shit to do."

The film went straight to DVD, and Dave Aldridge of Radio Times said it did "nothing to enhance" Dani's reputation. Still, we all start somewhere.

Perhaps this is Dani's defining role. Free from being cast as an extra who's merely "Danny Dyer's daughter", now Dani has a speaking role as, um, Martin Kemp's daughter instead. Kemp, the former bassist from Spandau Ballet, has to kill six people in six hours. If you watch to the end of this Insta video (yes, that's Michelle from the first series of Skins) you can see a very good Dani Dyer cryface.

Nominated for fuck all, the BBC's film critic Mark Kermode labelled the acting "wooden", the dialogue "earscraping", but – importantly for the nation's collective love of Dani Dyer – not the actors' fault.

In fact, it's a film so universally panned there are two separate one-star reviews of it on The Guardian's website. Truly getting it with both barrels, one calls it "outrageously shoddy" whilst the other finishes it off with "will disappoint the most undiscerning viewer".

But most savage of all is Total Film's review: "From the stunt casting Dani Dyer subbing for her father; glamour model Lucy Pinder to the dreadful stunts (the Kemp vs helicopter sequence is a shocker), it's an 84-minute amateur hour." Christ.

Ding dong, back to old versus young gangsters. Straight to DVD. Dialogue like "petrol bomb through the windaa, job done." 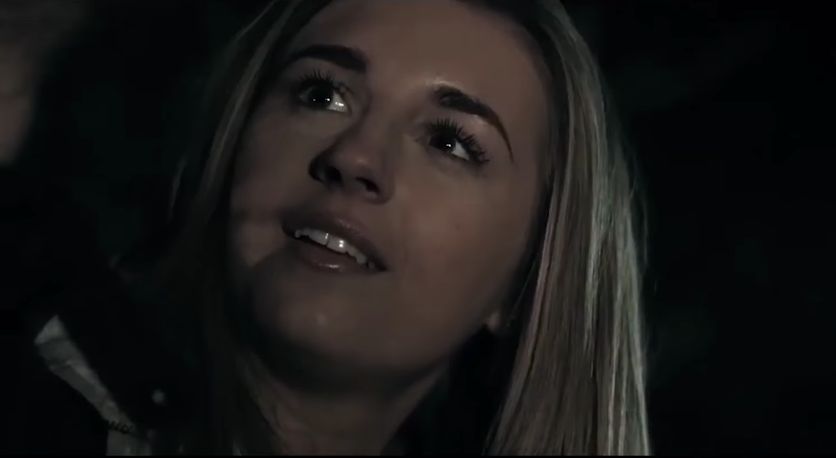 A still from the trailer. Look, it's Dani.

Bonded by Blood 2 is the sequel to Bonded in Blood, maybe best known for Adam Deacon saying 'cunt' a lot.

But as the sequel went straight to DVD, we don't have any critics' reviews. Instead, we've got to make do with Amazon reviews.

"It's one of those films you'll watch once and probably never watch again," says one reviewer, who gives it four stars.

Dani plays a character called Elizabeth. If you want to find out more, watch the film. Dead sure it's pukka.

Sure, films have tried weird and wacky marketing campaigns before. Ryan Reynolds promoted Deadpool whilst in character. Paranormal Activity made people vote for it to be shown at their cinema.

But has anyone tried making their leading actor go on the reality TV sensation sweeping the nation before? Have they fuck.

She's leading a line-up of Tyne-Lexy Clarson from last year's Love Island and the actress who played Anwar's sister in Skins. There's no trailer on YouTube for the film. Yet.

• You know about Danny Dyer, but who are the parents of this year's other Love Islanders and what do they do?

• Megan looks TOTALLY different before surgery, and we've got the PICS