Finally people are seeing Alex for who he really is, creepy and patronising

It’s just so uncomfortable to watch

I don't want to blow my own trumpet or anything but I called Alex an entitled man a week ago and in return I got dragged by his friends on Twitter.

But it doesn't matter because here we are again as people have finally realised he's a creep and also not very nice to women. Just look at the way he behaved with the new girls in Casa Amor last night. He treated them like they were falling at his feet. Newsflash, they weren't!

For the past few nights we have witnessed Alex try and get to know Charlie, who visibly wasn't reciprocating his vibe. Realising that, he spun it round as though it was him who wasn't interested in her and claimed he's putting her on the "subs bench" as he tried to crack on with some girl called Grace. Who no one even knew existed before last night? That's just rude.

LOOOOOOOOL NAH WHO THE FUCK MADE ALEX THINK HE’S ALLOWED TO TALK ABOUT PUTTING GIRLS ON THE SUB BENCH? THIS GUY THAT’S BEEN ON A SEASON LONG TRIAL. I AM CRYING. #LoveIsland

Everything that man does is uncomfortable to watch. He is patronising and it's awful. I kid you not, his exact words to Grace last night were: "It's been interesting getting to know you cos you're- you know – a hairdresser but at the end of the day you're a business woman, career driven."

What's wrong with being a hairdresser? Clearly that's not enough for clever Dr. Alex or why else would Grace also have to be businesswoman for him to deem her worthy? And after his remark, he just kept digging the hole deeper: "Look we both look after people at the end of the day." Oh PLEASE, just do everyone a favour and stop talking.

Though that wasn't enough of awkward Alex for one night. I'm sure I speak for every woman when I say I was deeply disturbed at his attempt at flirting, in which both him and Grace were in this weird hairdresser role play and he asked if she had a free "slot" for him.

When he pulled Charlie aside last night, telling her he wanted to share a bed with Grace, he made it sound like spending two nights was a generous gift he bestowed upon her. Wow Dr Alex, thank you so much for giving Charlie your undivided attention!

Last night was the first time a lot of people saw Alex as problematic. But this isn't the first time he's been called out for acting entitled. His angry outbursts when things don't go to plan have been clear evidence of his fragile ego. 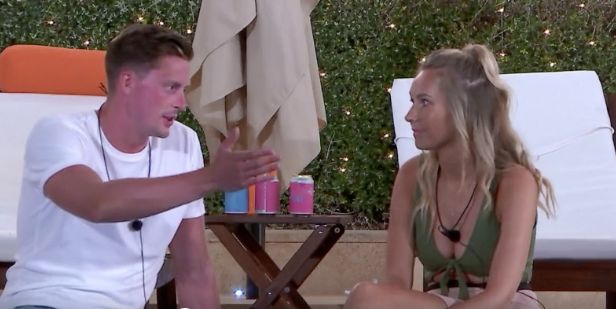 And can we actually talk about the fact he told Sam to ditch Samira last night? The same Samira who has stuck by Alex for weeks and told him the truth about Ellie. His loyalties are questionable too.

This episode Alex spurred on Sam to ditch Samira. The same Samira who saved him from elimination when no one would go near him. Then he’s talking about putting girls on the “subs bench”. All after he went off at Ellie for “betraying him”. Serious, the guy is the worst #LoveIsland

But the worst thing about Alex isn't that he can't get a girl to like him. No, that part is fine. Maybe it's the pressure of being on Love Island. Maybe it's the laddish behaviour rubbing off on him. But none of what he does comes across as natural and the women on the Island shouldn't have to put up with it.

• Before the fillers: What did the Love Island girls look like before their cosmetic surgery?