A look at the Tories of Bumble, how posh guys in tweed try to find love

‘Investment banker with a net worth of over 3.5 Billion…interested now?’

Instagram account Tories of Bumble is a collection of the poshest people on Bumble right now. The curator of the page describes their mission as: "Collecting Bumble profiles of future Cabinet Ministers."

Georgia 'Toff' Toffalo of Made in Chelsea is a fan, claiming in her new column for The Sunday Times it is a great place for other Toffs to find love: "Check it out. You might find a hottie on a horse. Yee-haw!"

If you have Bumble, chances are you come across these poshos on the daily. So you know the type we are talking about here, someone in tweed poses with a deer they just shot, some guys in tuxedos clink champagne glasses outside a country manor, a guy in a flat cap has the ruddy cheeks and slurring vocals of someone so rich, it's actually making him tired.

Toffs of Bumble looks like a catalogue for the Young Tories. To see who's going to be our next finance minister, just take a look at the below list:

This guy is so excited for brexit

He can be seen puffing on cigars, hunting, drinking ale outside of a country pub and sipping champagne after a bloody good polo match.

???⛔️ PSA: uncovered a man so Tory he makes Rees-Mogg look like a raging socialist

Top quality banter from this guy

That feeling when you inherit a castle from your Granny.

Spotted: Theresa May's partner in crime, wandering amidst a field of wheat

Posing with a gun is the most efficient way to assert your masculinity to the female sex.

I'VE REACHED PEAK TORY I CANNOT COPE ? Henry is all one person and he is the living embodiment of this account

Prince Harry? Is that you on the left?

? Are Cheeseboards Tory? ? Share your thoughts in the comments below!

None of these guys pay taxes do they?

I bet he insists for paying for all his dates' drinks in Bitcoin. 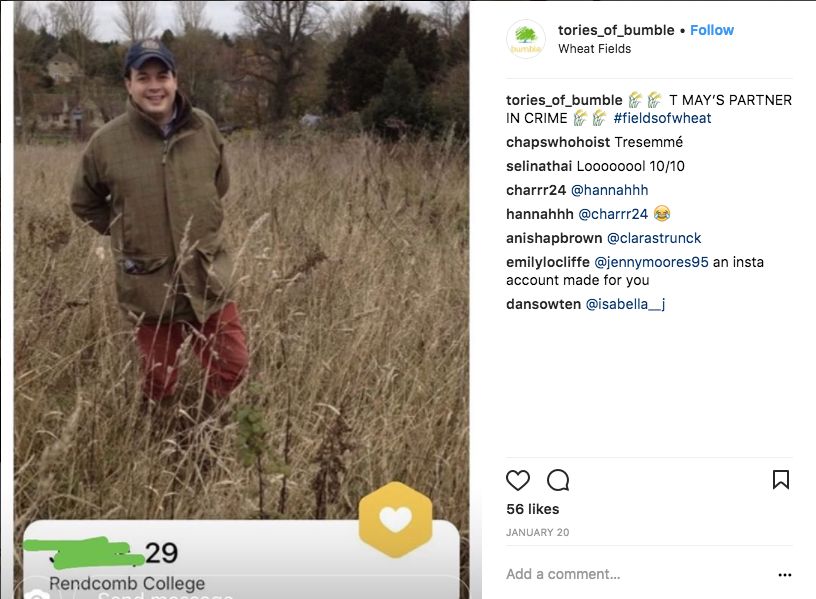 Interests include eating copious amounts of red meat, chortling about free-market economics and explaining things to the fairer sex. Never walks anywhere unless it is with a cane.

Get you a guy who doesn't pay tax so you never have to work again, instead you can just enjoy boozy brunches

Entry into the Tory club requires at least one black dog, Labradors preferred.

Happy Friday everyone here's a big Tory with a big gun to start ur weekend off right ✌?️Shouts to everyone going game shooting this weekend ?

His trousers are so red they are making my eyes twitch

His Mum will never accept you.

It is a very serious speech impediment, brought about by a private school education and owning too much land.

I don't know this for sure, I was just guessing based on how he has matched his tweed with the mansion behind him.

When you match your three-piece with your spaniel ??? #torydoggo