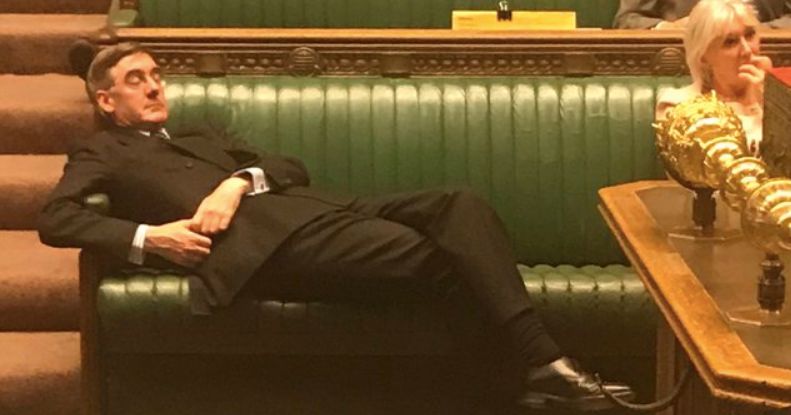 He said the longest word ever pronounced in Parliament and it was classic – floccinaucinihilipilification, by the way. He gives his children names more suited to places and the internet's all over it. He gets all tired mid-debate and it is just so cute.

Jacob-Rees Mogg is the political hero we've craved, the man for the meme. For the moment.

Take a deeper look at Rees-Mogg, though, and realise his politics are no joke.

The memes are becoming reality

If likes on meme pages counted towards Tory leadership campaigns (they should), ol’ Jacob would be sitting pretty. Middle Class Memes For Rees-Moggian Teens is the leader of a pack that's got over 100,000 likes between them.

It’d be easy to dismiss this as taking the piss out of a man who’s seen the Boris Johnson formula and decided to dial it all the way up to 11. But something a bit more serious lurks beneath the surface.

Perhaps Peter and I ought to get a tattoo after all.

Someone actually got a tattoo of Moggmentum, the Rees-Moggian fan group that parodies the Momentum movement which got Corbyn a general election loss to be proud of.

The Times reports that these form an actually real, serious movement, “advocating for Jacob Rees-Mogg to become leader of the Conservatives in a future leadership election.” Beyond the legions of virtual fans, there are reportedly 700 volunteers, “laying the groundwork for important conservative campaigns in the future.”

The memes are becoming reality,and this hasn’t escaped the man himself.

Nanny is more technologically capable than I thought.

Penning an article called “I don't want to be Prime Minister, but if I was, here's what the Conservative Party would do” only reminds everyone of the idea that anything before the "but" is bullshit.

It's time to take him as seriously as these people, including himself, clearly do. And that’s when the problems start.

Let’s play a little game of how many times has Jacob Rees-Mogg voted for each of these things.

Now let’s have a look what he’s voted against.

And it'd be easy to think he just opposes tax, but he's voted for higher tax on alcohol 17 times.

Now, surely this is all just normal Conservative politics? What's so extraordinary about Rees-Mogg that we need to pick on him?

Since the boy Jacob was elected as an MP in 2010 until last year, Conservative leader David Cameron never voted against gay marriage or a tax on bankers' bonuses. It's hard to argue that Rees-Mogg was dutifully following the party line on these things.

His views are his views, and he sticks by them. But they're not just normal Conservative fare, they're from a bygone era.

As much as the world's mostly moved on from dressing and talking like that, it'd be nice to think it's moved on from thinking like that – that gay marriage is wrong, that everything should remain as it was a couple of hundred years ago.

It'd be nice too, to see all the memes as great and the act as cute, but it just seems like a smokescreen. Without it, would people be as gleeful about the things he actually wants to get done?

But hey, he talks funny so he must be good, right?