Meryl Streep has long been a household name, and is easily known as one of the most versatile and competent actors of our time. Everyone has their favourite moment with Meryl: be it her all-singing, all-dancing self in Mamma Mia, her steely performance in The Devil Wear’s Prada or her layered performance as troubled matriarch in August: Osage County – the Faces of Meryl are boundless.

It seemed more than appropriate, then, that last night at the Golden Globes, she was awarded the Cecil B. Demille award for a lifetime of inspirational work in cinema. The acceptance speech that followed confirmed her importance as a role model, not just as an actor, but as a woman who stands for freedom, equality and, most importantly, empathy. 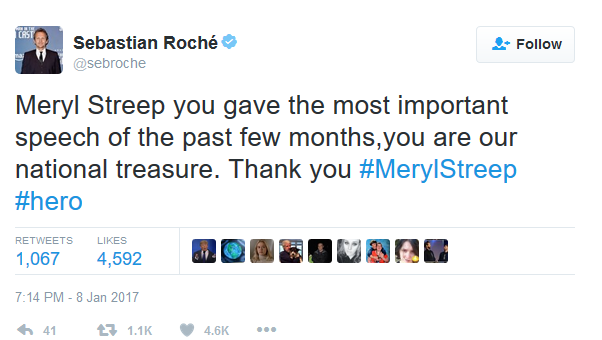 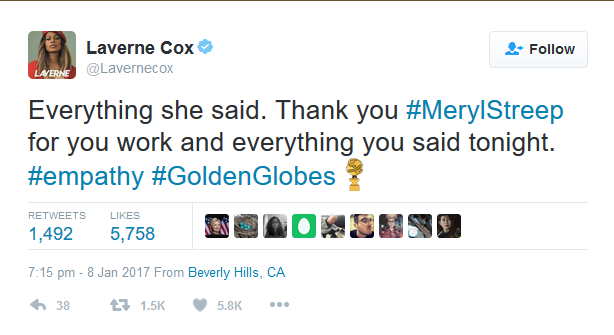 Heart-felt and enlightening, Meryl’s speech left the crowd with shivers as she pointedly and effectively revealed the dangerous mentalities sweeping the world. A particularly powerful moment came as she spoke of, Trump’s imitation of a disabled reporter, a moment that “broke [her] heart”, not least because it was someone Trump “outranked in privilege, power and the capacity to fight back”.

She moved on to warn that such behaviour “gives permission for people to do the same thing”, especially when it comes from someone who is set to  hold “the most respected seat in [the] country”. Her words presented a simple truth: “when the powerful use their position to bully others, we all lose”.

What followed this was as brave as it is vitally important, as she moved on to the responsibility of the Press. She implored them “to hold power to account… for every outrage” committed, and moreover for everyone else, the Hollywood Foreign Press included to support the protection of journalists, because whilst “we’ll need them going forward,… they’ll need us to safeguard the truth”.

In a speech which could have been a lighthearted list of thank yous for her award, Meryl instead chose to bring home the danger Freedom of Speech could find itself in amid a growing atmosphere of fear, hatred and disrespect. 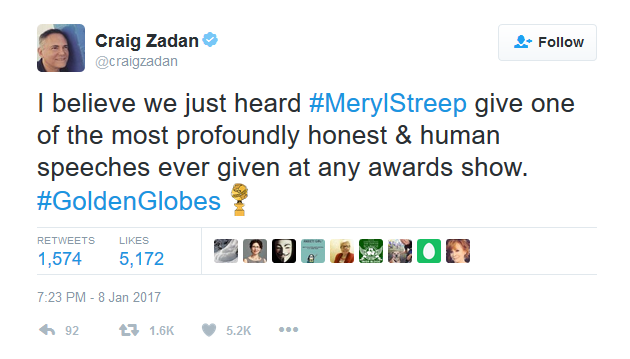 I’m going to be honest, as someone who spent most of 2016 being disheartened and shocked by American politics, her speech almost brought me to tears. While there were contributing factors of lack of sleep and looming deadlines, there’s no doubt that her words hit home hard. But even though the facts and events she recalled might have inspired fear at one point, her deliverance left me with a feeling of hope. Perhaps the most important word in her whole speech was empathy: the empathy of the actor as they assume a new role, but also the empathy that makes us human, that engenders respect, and that ultimately gives us hope for the future. 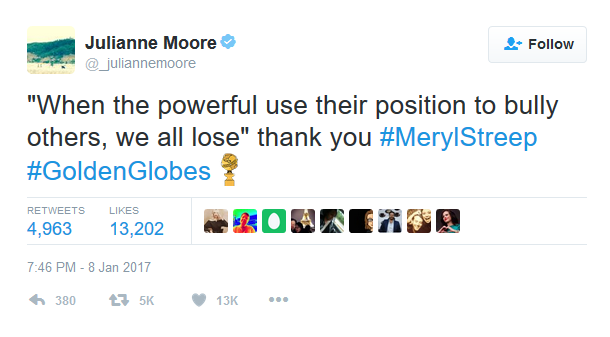 Last night Meryl proved to the world that she is the epitome of grace, a shining light of clarity and intelligence in an increasingly gloomy and narrow-minded world. Save her words for those days when we need reminding of the freedom to which we have a right and for which we should fight, when we need reminding of the diverse, beautiful, human community to which we belong. And when we don’t feel strong enough to do that, look to the immutable Carrie Fisher as Meryl does, and “take your broken heart, make it into art”.