From the streets of Rio’s favelas, the Olympic party looks very different

And we’re the ones who can make a difference

Wildly straddling one of Rio’s most iconic attractions, the rugged Morro Dois Irmãos, and adjacent to one of the city’s most popular beach resorts Leblon, is the lively hillside community of Vidigal. Pacified in 2011 by police from drug lords, this favela (shanty town) is home to over 40,000 residents, including me. With its narrow streets seasoned, colourful residents and blocky terrace housing, cable wires and moto taxis scooting up winding roads towards tropical forestry, it’s difficult to imagine that this slope was once a hotbed for local drug lords and gang violence.

But this is the view that many still hold. For foreigners visiting Brazil, even pacified favelas including Vidigal are often regarded as no-go zones, with the Australian Olympic team having been banned from visiting these neighbourhoods. Educated by scare stories, this shouldn’t be a surprise. But there’s an irony here. Less than 5 minutes away by foot is the luxurious 5-star Sheraton Grand Rio Hotel and Resort, not only hosting wealthy visitors, but members of the Olympic Committee and athletes as well. 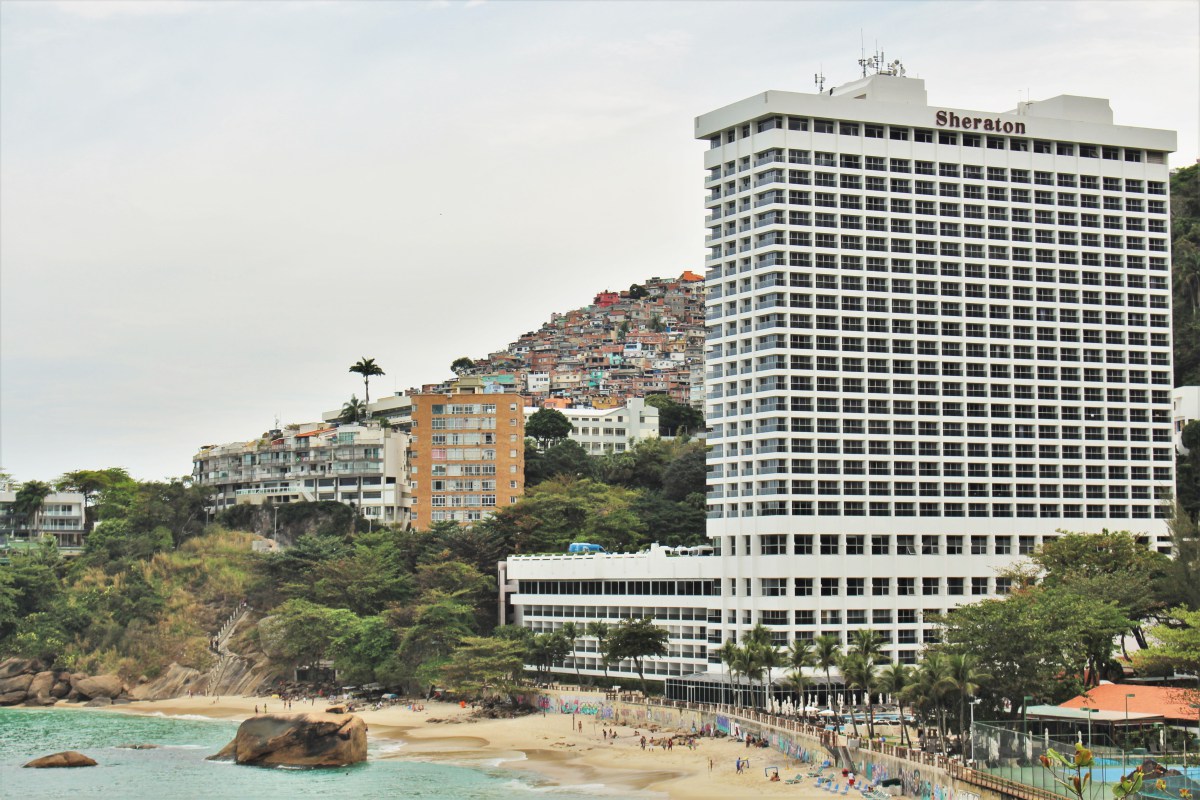 The Sheraton Grand Rio Hotel & Resort, in front of Vidigal

Equipped with the usual lavish facilities including a choice of beachside bars and ponytailed receptionists at a potential price tag of £465 per night, I managed to speak to some guests there about Brazil’s favelas. Brett, an 18-year-old student visiting Rio with his family said: “It would definitely increase my world view and I think I would have a lot more genuine understanding of Brazil should I visit a favela. But I need to think of my own safety. Especially as a white American male, I wouldn’t go.”

In fact, many wealthy Brazilians also hold the same opinion. And although drug-related crime and violence enforced by poverty are still present in some favelas, making them unsafe for unaccompanied visitors, pacified favelas such as Vidigal are as safe as the most gentrified areas in the city. Sometimes even more so. 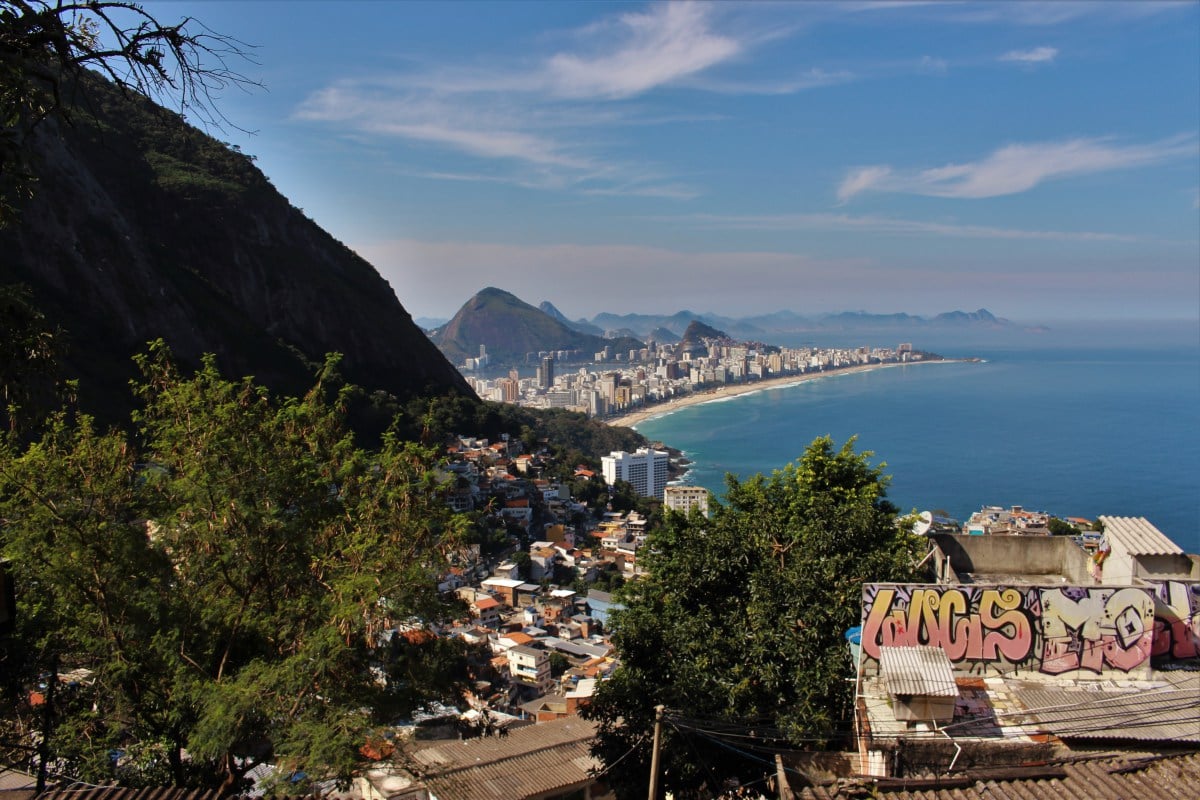 The view of Ipanema beach from Vidigal

“What do I like most about Vidigal? The view that it has. I also like that it is near to almost everything, unlike where I used to live. I love the community too – simple people with a good heart,” Oberdan explains. A 26-year-old art gallery salesman, he has lived in the community for two years. 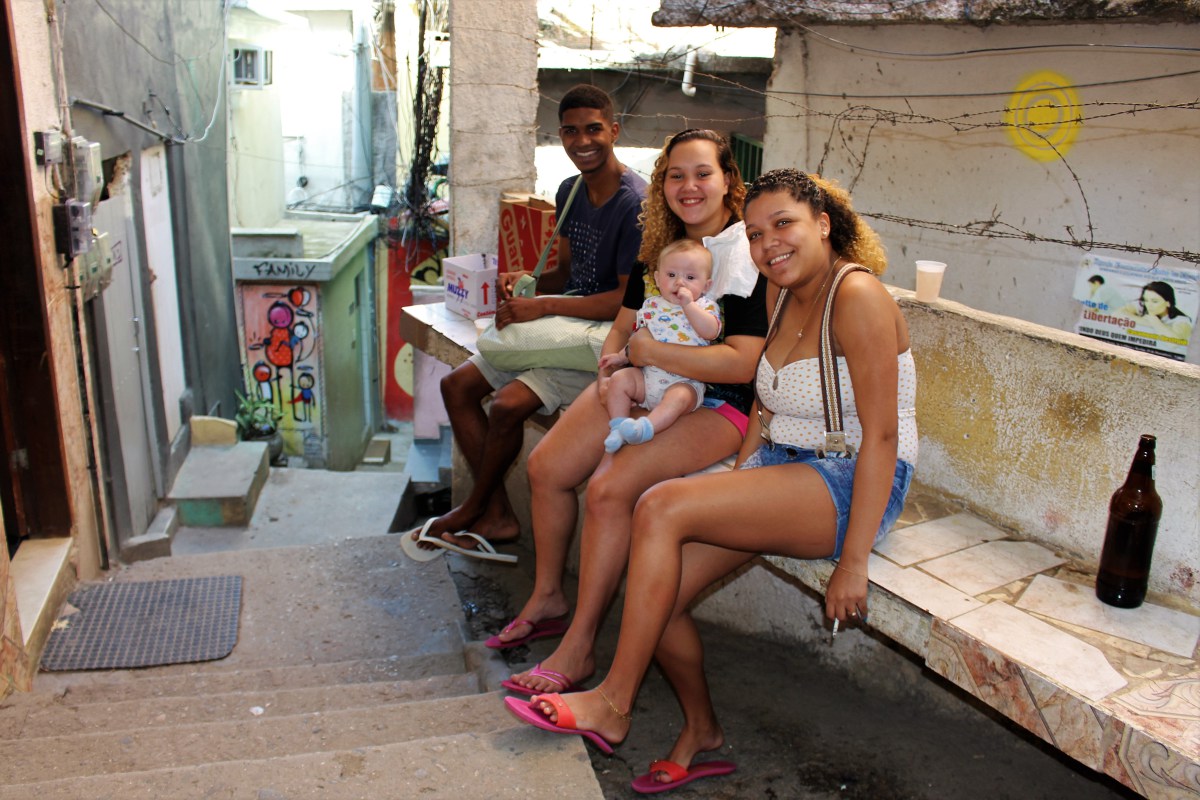 Mary and her friends sitting on a staircase in Vidigal

17-year-old Mary, who has lived in the neighbourhood since she was born echoed these sentiments, answering simply that she likes “everything” about her community. The landscapes are her favourite.

Despite these upsides however, Vidigal is still far from a dream community. Although more investment has been made towards the entrance of the favela in recent years, where one can find five story inner-city style apartment blocks, chain restaurants and food stalls as well as chic beauty salons – the areas further up the hill continue to face infrastructural problems. 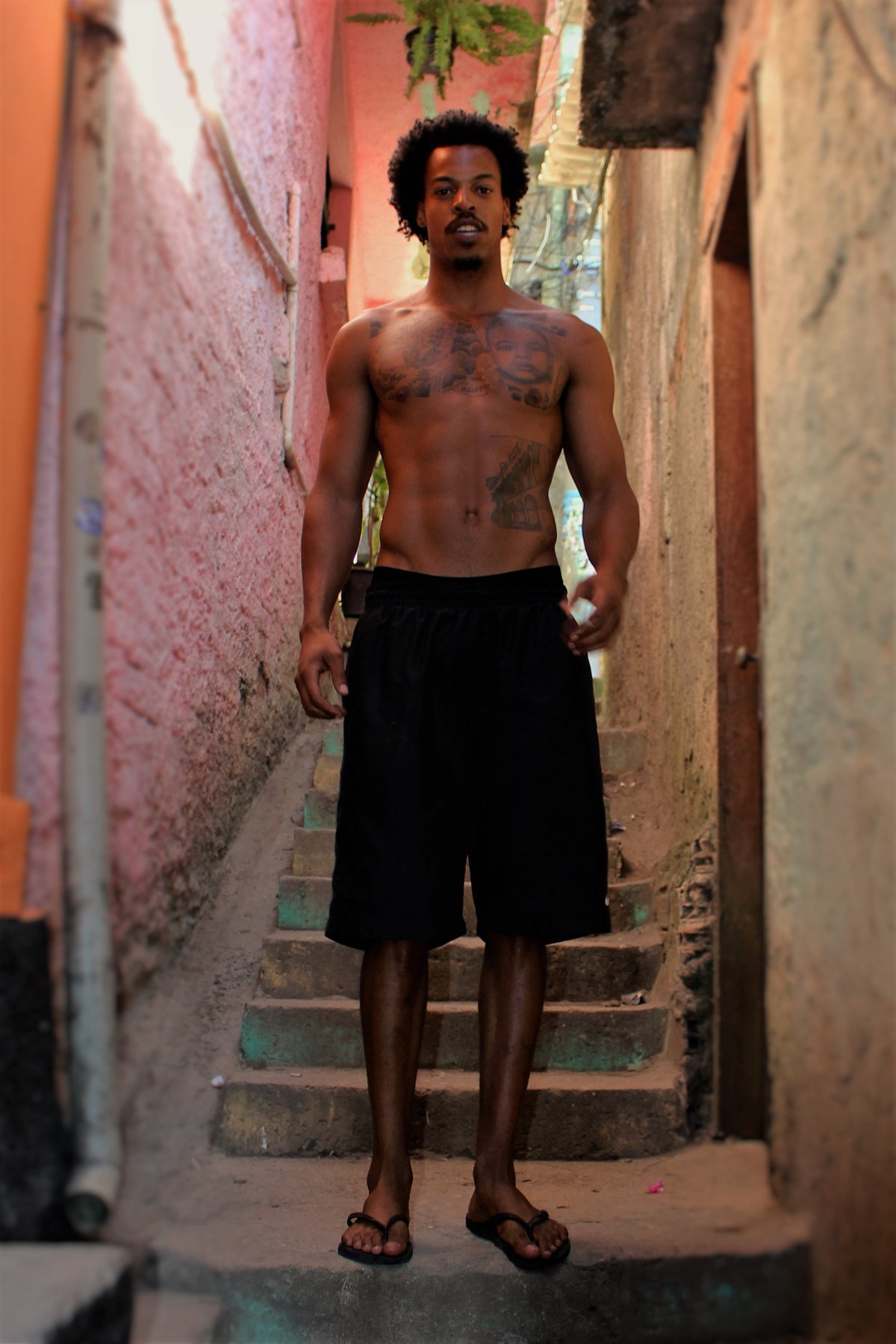 Oberdan standing on a staircase in Vidigal

Oberdan told me: “I like the hill, but living here there are some difficulties, such as getting home – it is necessary to take a motorbike. Often there is no water: this is complicated at times.” He continued, “There are many cats and dogs here too, many of which are not treated well and live in very small, awful places.”

Mary cited a lack of respect by the police as another problem. She described an incident when police searched her bag containing her baby’s things while with her husband, putting “dirty hands” into everything, including their baby’s bottle. She recalls: “They said it was routine work.” 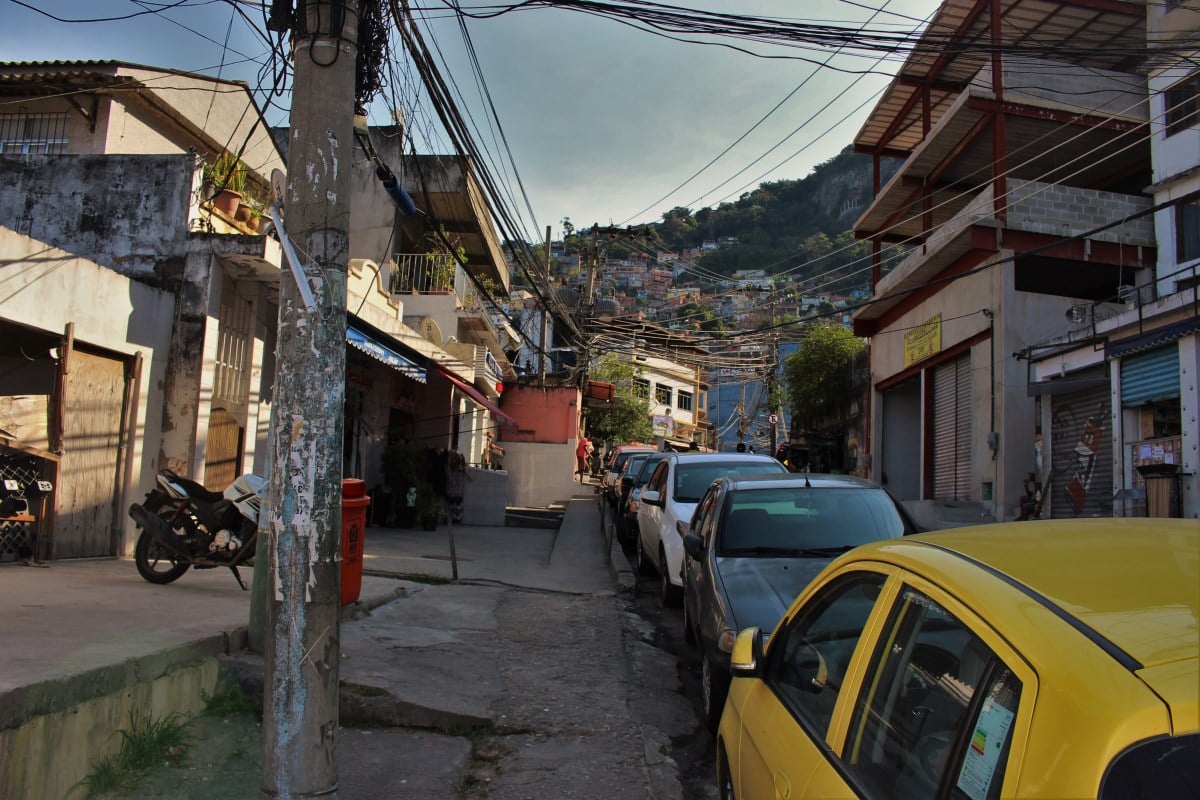 The streets of Vidigal

The UPP (Pacifying Police Unit) are present throughout the favela. On watch from labelled mobile pods even at the top of the hill. Although many residents agree that they have increased levels of safety within the neighbourhood, others are critical, often citing disrespectful treatment during their operations, usually in search of drugs.

Oberdan tells me: “At times they stop innocent people… people who don’t use drugs. This caused a lot of outrage in the community when the UPP began. More of the community hated them, preferring the bandits instead. But I’ve never had problems with them in Vidigal, unlike in other places. I regard the police here as peaceful.”

Compared to other favelas in the city, Vidigal has certainly seen much improvement in recent years. However, this has come with a hard price, as property rental has also increased with wealthier Brazilians and foreigners having begun to appreciate the hill’s superb location.

One can only hope that continued development of this favela will not come at the cost of its vibrant community. At the very least, the Sheraton Hotel at the base of Vidigal serves as a stark symbol of the country’s social divide, and at the most, it is a looming reminder of the hillside’s steady gentrification. Although there are signs of improvement, especially with the rising political party, Frente Favela, aiming to address issues of class, race and gender in the country, it may be some time before this internal effort can make significant change.

External effort is thus necessary and possible. Having presumed the worst about these neighbourhoods myself before arriving in Brazil, it is clear how important it is to challenge the mass media’s assertions about these communities. Rather than fearing them, visitors should take the opportunity to speak to the people who live there, and form their own opinions. This is just one of the ways that we can fully accept that people in these communities do not need to be synonymous with their stereotypes nor their circumstances, and finally change the cemented narrative surrounding Brazil’s poor.