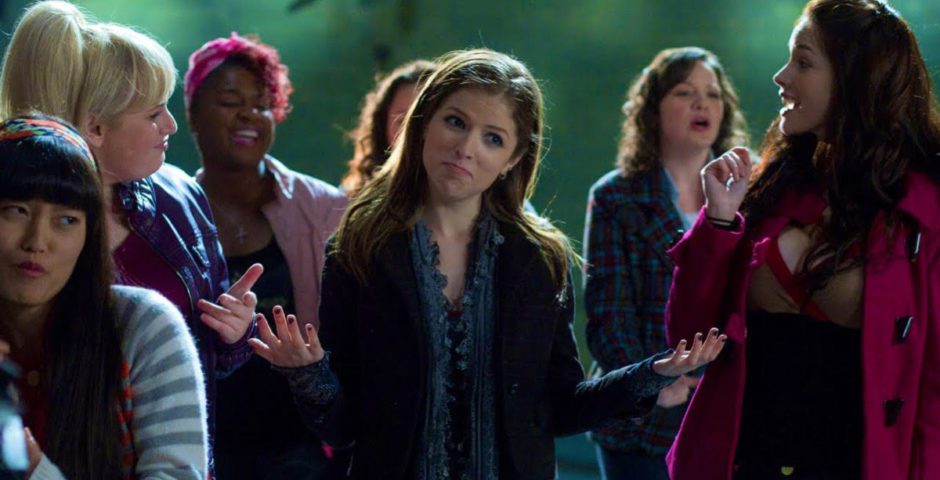 The best and worst songs from the Pitch Perfect films, ranked by how hard they acaSLAP

Play Riff Off in the club you cowards!

Pitch Perfect hitting the cinemas was, in the words of the doomed Fantine from Les Misérables, a time when hope was high and life worth living. It was the perfect intersection of my interests as a deeply annoying musical theatre gay combining with my love of films – like the maniacal lovechild of Bridesmaids and Glee. The songs of Pitch Perfect dominated my college and university years like a dominatrix wielding a whip. And like the submissives under the aforementioned dominatrix’s control, I loved it. But it’s not all been acaplain sailing – and not all the songs smack your round the tits as hard as Riff Off. I’m ready to announce the 10 greatest Pitch Perfect songs ranked – but first, let’s cower in fear from the five absolute worst.

I would rather be stuck in a dark haunted house with a broken one than have to actually listen to Flashlight. I don’t care if it’s Hailee Steinfeld whining through it or Jessica J Cornish belting it out – I’m skipping.

There’s such a deeply evil tone to Bumper’s vocals, every time I listen to Let It Whip (which is honestly, never) I feel like I’m being spat on. As for Lollipop, I don’t want any part of these men singing MIKA. Get it OUT of my ears.

2. We Belong (Fat Amy and Bumper singing as she paddles to him over a lake)

I want to see the death sentence.

Kicking off the top 10 with my Bellas girlies doing what they do best: Harmonies, layering and a modern banger that slaps! I love the absolutely ludicrous plot of Pitch Perfect 3 – a film which here sees the Bellas willingly go into the shady looking black van of a stranger and then sing a song by Joe Jonas’ band as they get unknowingly kidnapped. For being that thick, it was deserved.

Starting off Pitch Perfect 3 with an a cappella cover of the second greatest pop song of all time? A winner. The vocals on this are a bit evil, frequently so nasal that it makes me feel like I have a sinus infection, but I’m so happy that Toxic is in the PP canon that I’m willing to overlook it.

I’m extremely partial to this gorgeous moment in the first Pitch Perfect, where the Bellas do what they do best and show how special they are. The layering is beautiful, the mashup choices are wonderfully 2013 and it just feels very healing. Anna Kendrick serves us a main pop girl vocal and it’s a pivotal moment in the film where the gals all realign and go on to smash it. They’re amazing just the way they are!

Picture the scene: A bus ride to the competition. Brittany Snow queen of my world bursting into song. Every Bella joining in one by one until an army of them are bellowing into Anna Kendrick’s face “And the Jay-Z song was on!” hoping she joins in, because Beca is as we all know far too alternative to ever recreationally sing Miley Cyrus with the girly wurlys. But against all odds, she breaks into a euphoric “So I throw my HANDS up!” and the rest is history.

6. Since U Been Gone

It should be the law that anyone auditioning for anything ever has to sing the Kelly Clarkson classique Since U Been Gone. This is a masterclass in SINGING. Everyone nails it, anchored by queen Ester Dean who smashes it out of the Pitch Parkfect. The film version is elite with all the character vocal moments. It’s pure evil that Beca thought she was too good for this song and we all had to endure her rattling about with a plastic cup.

The fact we’re meant to think of this absolute bopperooney Mara as tired is criminal because all it does is wow. From start to finish! I don’t care if the songs are old fashioned, if it ain’t broke don’t fix it. I Saw The Sign takes me to church, Eternal Flame is a spiritual experience even if it’s not Atomic Kitten on the microphone and Turn The Beat Around is a gay classic. This song deserves its flowers, and I will give them to it by getting it ranked as the fifth best Pitch Perfect song ever. Acaquote me!

The only non-Bellas banger to make the top 10, and fair play to the boys, it deserves. A mashup for the ages, this one. I absolutely LOVE Skylar Astin’s vocals as Jesse and they sound flawless on Bright Lights, Big City. A great song that we can now all enjoy without having to tolerate CeeLo Green. Ben Platt coming on with “I got the magic in me!” is a tingle moment. Everything comes together so well it feels like it’s crafted from the a cappella gods. It very probably was!

If this is the final song we ever hear from the franchise, then what a perfect swan song it is. Everything about Freedom! ’90 is so meticulously crafted and produced that it feels like the films were building up to it from the very beginning. I love that it muses Beca’s vocals with the looping and production skills that she has – the perfect fusion of a cappella and technology. When all the Bellas come in and join in it made me cry in the cinema and I don’t care who knows it! It’s just so special. These girlies are my family.

Notice that there is one film that dominates this top 10 ranked Pitch Perfect songs, and that’s because the other films tried to replicate the music of one with muddled success. Riff Off was a phenomenon. School groups around the world were trying to play at doing their own Riff Offs. We were in a chokehold. The formula is perfect. The song choices exceptional. Every little bit of the first Riff Off flows like a river through a valley – seamlessly natural. Too many highlights to name, but I LOVE Jesse’s Feels Like The First Time vocals that segues into whitest woman on earth Anna Kendrick problematically rapping No Diggity.

They put a Riff Off in the sequels, but they never even came close to this masterpiece. Untouchable, and only beaten by one perfect final banger on the Pitch Perfect songs ranked list…

How do you end a film full of iconic moments, mashups and bangers and wrap everything up seamlessly? With the finals song the Barden Bellas do at the end of Pitch Perfect, that’s how. What’s so special about this song is how it shows the growth of The Barden Bellas as a group – who have used Beca’s vision to do what they already did great but with a move into the future. Modern songs, diverse girls in the group and unexpected musical choices.

The most special part of the song is, of course, Beca singing Don’t You (Forget About Me) – the song that is at the end of The Breakfast Club, a film pivotally important to her relationship with Jesse. His face as he realises that she put it in for him and then the build to him putting his fist in the air like Bender does in the film? A masterpiece. I’ve got goosebumps thinking about it. AcaPERFECT!

Listen to all the Pitch Perfect songs ranked in one playlist here.

• Why weren’t Christine and Amanza at the Selling Sunset reunion?

• Jason and Brett spent time in jail and correctional facilities when they were younger?!