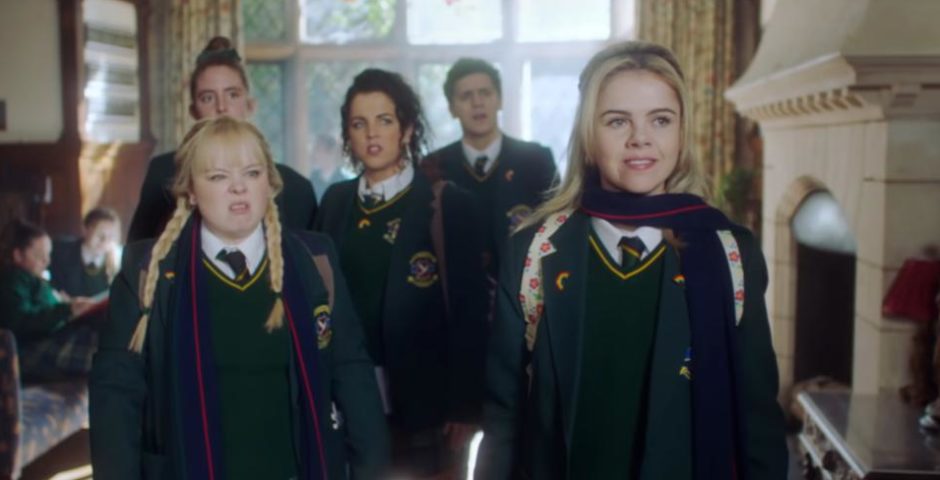 That’s good craic so it is

The final season of Lisa McGee’s hit show Derry Girls aired last night after a long three years of waiting. The show is set in Northern Ireland in the 1990s, and if there is one thing we Brits are struggling with it’s the Derry Girls slang.

For the past two seasons, we have been introduced to the phrases “catch yourself on” and “aye, so it is”, but what do they actually mean? If you have found yourself googling the meanings of Northern Irish slang after each episode, here is your glossary of all the Derry Girls lingo.

This is a common phrase used throughout the show and is often used to tell someone to stop being ridiculous.

When Erin asks her mum to go into her trust fund for the school’s trip to Paris, Mary replies, “Catch yourself on!”

This is a phrase used to emphasise something. For example, “I’m delighted, so I am.”

When someone is raging, they are either annoyed or angry. The night before the girls sit their history exam, Claire panics they haven’t studied enough on the potato famine. Michelle tells her, “We’ve got the gist. They ran out of spuds. Everyone was raging.”

The word ‘ride’ is arguably Michelle’s favourite word and has two separate meanings. To use ride as a noun, it is referring to someone you find very attractive. When soldiers do a check on their school bus, Michelle tells the girls, “Some of them are rides. I’m willing to admit it even if no one else will.”

To use ride as a verb, it is referring to having sex with someone. When Michelle introduces James to the others she says: “Me Aunty Cathy’s just got divorced so she’s moved back. The husband caught her doing the dirt on him. She’s a bit of a goer, our Cathy. Riding rings round him so she was.”

Wains is another word for a child or a young person. Granda Joe always refers to the girls as wains. When talking to Gerry, he says: “Them wains shouldn’t have to take the bus to school. You should be driving them.”

A cack attack is used to describe when someone is feeling nervous. When Claire tells Erin she is nervous about coming out, Erin says: “Everything makes you nervous Claire. You’re a walking cack attack.”

Craic is a commonly used Irish term for something fun or news and gossip. For example, you could say, “What’s the craic?”

In Northern Ireland, when someone refers to something as ‘cracker’, it means it is brilliant. In season two, when the girls tell Sister Michael they don’t know who Michelle’s suitcase of booze belongs to, she alarms the bus of a code red. When the bomb squad are about to blow up the suitcase, Orla says: “Their wee beekeeper costumes are so cracker!”

An eejit is an Irish word for a stupid person or idiot. Throughout the series, Granda Joe calls Gerry a “feckin’ eejit”.

To saunter is to walk around somewhere. In the show, before the girls are about to set off to Belfast to see Take That, a news report comes on about a polar bear who had escaped. Despite Gerry trying to dismiss any worries, Granda Joe says: “But he’s not in the zoo anymore, is he, simple Simon? He’s sauntering about Belfast.”

If you were to tell someone to wise up, you’d be telling them to stop being so stupid. When Michelle explains who she is going to get drugs from at the wedding, she tells Erin, “Wise up, Macca!”

The word broke is of Scottish origin and means to vomit.

When the gang are being questioned about the break-in at the school, Erin accuses the police chief who is immaculately played by Liam Neeson of stitching them up. When asked why he’d do that, Michelle replies, “Because we are Fenian’s”.

Fenian is a term for the Irish Republican Brotherhood. They were a secret political organisation in the late 19th century that wanted independence from the British.

Slainte is often used as a drinking toast in Ireland. It means good health. In the latest episode, after unknowingly helping two people burgle the school, Michelle says “slainte” before they drive away. There you go! You’re now entirely clued up on Derry Girls slang.

• The 10 worst Drag Race All Stars episodes of all time, according to IMDb